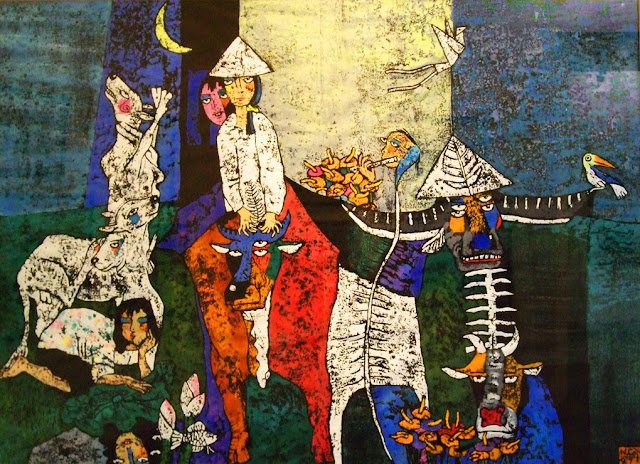 “A sincere artist is not one who makes a faithful attempt to put on to canvas what is in front of him, but one who tries to create something which is, in itself, a living thing.” - William Dobell

Today we visited the Chùa Trấn Quốc (Tran Quoc Pagoda), the Chùa Quan Thánh temple, the Ho Chi Minh Mausoleum, the Army Museum, the Hanoi Flagpost and the Hang Be market. It was a tiring day owing to the heat and the queuing up for an hour and a half, to get into the mausoleum, which was by the far the most exhausting. Nevertheless, once again, we really enjoyed what we saw and the history, culture and local colour we absorbed was immense.

Firstly, Chùa Trấn Quốc sits on an islet linked by a bridge to the causeway between two lakes Hồ Tây and Trúc Bạch. It was founded in 545 AD during the Lý Dynasty. It was moved from the Hồng Hà's left bank (Red River) to its current location in the early 17th century. In the gardens stands a Bồ Đề (Bodhi) tree that is easily recognizable from its heart-shaped leaves, taken from a cutting of the original tree, under which Buddha sat and achieved enlightenment in India. The island and pagoda provide a beautiful backdrop, particularly when viewed at sunset. The characteristic pagoda associated with the temple is a Hanoi landmark and corresponds with most Westerners’ ideas about what a pagoda should look like…

We then visited a second temple, the Chùa Quan Thánh beyond the two lakes, just across the causeway. According to legend, this temple existed in the south of the To Lich River in the period of Cao Bien, a proconsul of the Chinese Tang Dynasty who built the citadel of Dai La (around 866). After King Ly Thai To established the capital (1010), the Temple was moved to the north-west of the capital. It is one of the “Thang Long tu tran” – four famous sacred temples honouring the Gods who guard at four main directions (East - West - South - North) of the ancient Thang Long Citadel. The Temple is dedicated to Saint Huyen Thien Tran Vu who guarded and administered the north of the country. That is why it is also known as the Tran Vu Temple. The Temple has a majestic three-door entrance, which was built on large stones with a bell tower on its top. Inside it is very ornate and decorated with gilded carved wood, statuary, has many altars and incense burners. In the courtyard of the temple there was a martial arts lesson going on, so we stopped and admired the young men and women who were practicing the ritualistic moves.

We then proceeded to the Ho Chi Minh Mausoleum where a few nasty surprises awaited us. First, was the huge expanse of lawn criss-crossed by intersecting stone paths to the east of the Mausoleum. We attempted to walk across the path and were interrupted by loud cries of some soldiers who stood guard around the square. They motioned us off with gestures and more cries and when we approached them we could not make ourselves understood as they spoken not a single word of English. They motioned us to the south and after a couple of kilometers we finally came to the entrance of the Mausoleum, past a huge queue of people waiting to get in. At the entrance came second surprise number two: The entrance was closed firmly and the guards around (who once again spoke no English) motioned us away. Some of the locals were able to get in, but others who also tried were rudely dismissed. No English signs were around. We were rather hot and bothered and very disappointed.

Fortunately, I spied a couple – he Vietnamese, she a westerner, who were conversing with one of the locals. I enquired gently as to why the doors were closed and whether we would be able to get in. It was explained to us that because it was so crowded the gates had closed early and that we would not be able to get in. I thanked them and rather disappointed we lingered around looking sourly at the interior. I was surprised when our acquaintances came back to us and asked us to follow them. We did and going through a shop right next to the fenced off area, we were able to walk through the back door into the enclosure and the car parking area where the tourist buses were stopped. Thus entering by hook and crook we were able to join the queue of the hundreds and hundreds of people waiting their turn to enter the mausoleum.

It was hot, crowded and we were only amongst the very few westerners amongst the locals. We went through three security checks, relinquished our camera and finally we were waiting on the final stretch to enter the monolithic and highly unattractive, but nevertheless imposing, Russian-designed Mausoleum. Guards everywhere goose-stepped and showed off their guns, in order to intimidate and further build up the sense of awe of the pullulating masses. We managed to end up inside and after climbing a couple of flights of stairs we made our way through the murky and dimly lit cool chambers to the inner sanctum where the embalmed body of Ho Chi Minh lay in repose as though asleep. It was brightly lit and as we were shuffled along by guards, we saw the wax-like remains of the man whose last request before his death was “cremate me” – unheeded, of course…

We went out and walking through the manicured gardens came to the “One-Pillar Pagoda” (Chua Mot Cot). The characteristic thick central pillar on which this small pagoda is built, is said to represent the stem of a lotus flower, symbolising purity. The metaphor is made stronger by the square pond in which the pillar stands. Around the pagoda there is another small temple in which is a nice Buddha image, some gardens and a small monastery. It is well worth visiting this site as it is verdant with large shady trees and provides a cool refuge for the people who queued to see the Mausoleum.

The Ho Chi Minh Museum is a large modern building immediately next to the Mausoleum and is dedicated to the great revolutionary and statesman who went on to become first the Prime Minister and then the President of North Vietnam. The common people of Vietnam are indebted to him for what he has done for their country and as a mark of their gratitude the museum was dedicated to him. The Museum in preserves everything memorable related to the great revolutionary. It consists of five extensive floors and was inaugurated on 2nd September, 1990, celebrating the 100th birthday anniversary of Vietnam’s great President.

The museum has an extensive collection of military orders, mementos, photographs of the Communist Party’s achievements, the great August and October revolutions, the country’s fight against Fascism and the imperialist power and the world movement led by Ho Chi Minh. The Top floor has a beautiful centerpiece which is a gargantuan gold lotus flower, which also shelters smaller exhibits related to Ho Chi Minh’s political activities. One can make one’s way from the “Past” section to the “Future” section by following the symbols made in the shape of labyrinthine murals. The National Liberation Movements are symbolised by a "volcano", bright red in color and surrounded by national totems. The Museum is another example of Soviet architecture and so the visitor has the opportunity to take in both the exhibits and structure.

We then walked to the Museum of Military History, (as the full name of the Army museum is), located in the south-west corner of the Hanoi Citadel. A large assortment of military paraphernalia clutters up the front gardens, overlooked by a large statue of Lenin, glaring from the other side of the road. The main exhibition covers events during the war against the French colonists from the 1930 uprising to the victory at Dien Bien Phu in 1954. The American War is described in a separate exhibition stall. There is a strong pro-Vietnam propaganda element of course, but there are rare photographs and video images of Ho Chi Minh, the legendary General Giap, the battle of Dien Bien Phu and the Ho Chi Minh Trail that makes a visit an unmissable experience for military history buffs as well as those simply interested in seeing the Vietnamese side of the conflict. A guide is essential to assist with language and contextual interpretation.

Right next door is the bonus of visiting the Cot Co Watch Tower. Apart from being of considerable interest as one of the few remains of Emperor Gia Long’s mighty edifice, the view from the top includes the whole Citadel area and its surroundings (unfortunately it was closed when we visited).

We then proceeded to the heart of the Old Quarter again and did some shopping around the Hang Be market area. A few souvenirs and gew-gaws for people back home. Nothing major and certainly nothing that we really saw and greatly admired or wished to buy for ourselves.

Now to conclude Art Sunday, a reference to the Fine Arts Gallery that we visited a couple of days ago. The enormous, fine colonial mansion that houses the museum was given an oriental-style roof when it ceased to be a residence. Nevertheless, the effect is pleasing and well-suited to what is after all, a gallery of Vietnamese art. The various collections are quite eclectic – inevitably, the Soviet inspired social realism school is well represented but is by no means dominant. Among the many reproductions, there are some fine originals. Particularly noteworthy are a delightful collection of folk art, and a good range of modern art including some excellent water colours and innovative contemporary work.

Unfortunately, the artworks that have been executed in lacquer have not stood the test of time and have discoloured very badly. The museum does not appear to be well curated, nor are the art works well looked after. We were horrified to see some of the guards sitting down and knitting, or dressing their hair or plucking their eyebrows or generally being very uninterested in their job or the visitors. There were several pieces that we liked and above is one of them, Nguyễn văn Cuông’s (born 1962) “A Fleeting Memory”, a quite large (103x157 cm) and colourful woodcut made in 1997. The artist was born in Hanoi in 1962 and graduated from Hanoi Fine Art College in 1989. Since 1990, his work has been exhibited many times in Vietman as well as in the United States, the United Kingdom, Taiwan, Japan and Norway.

Most famous are his woodcuts with succinct, symbolic motifs, strangely brilliant colours and a loose but haphazard plot. Cuông’s works of art appear modern but still display traditional roots. Cuông achieves his moods through a careful choice of colours, lines and textures, describing each scene carefully with strong reds and yellows, greys, browns and blues. Cuông invites us into a world where the rhythms of the everyday are the bonds which bind each of us together.
Posted by Intelliblog at 04:02