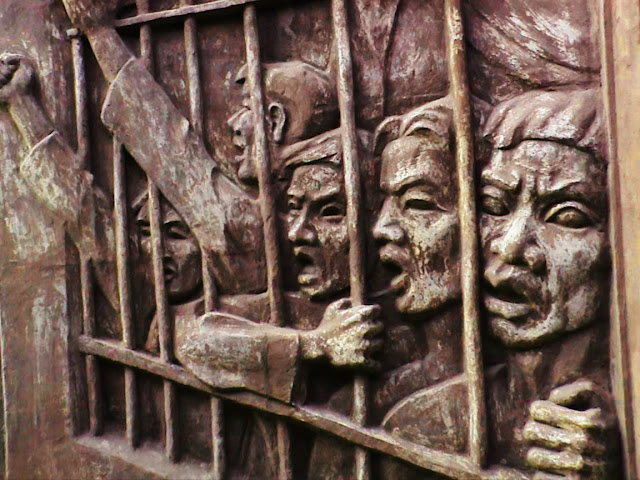 “You can kill ten of my men for every one I kill of yours, but even at those odds, you will lose and I will win.” – Ho Chi Minh

We visited the Hòa Lò Prison today, referred to as the 'Maison Centrale' by the French. It was called the 'Hanoi Hilton' by US GIs, many of whom did time here during the Vietnam War. Once it was a massive French-built prison accommodating over two thousand prisoners at its peak. The prison built in 1886 was quite small initially, holding around 400 prisoners. It was expanded in 1913 to hold 600 but actually in reality it packed in more normally anywhere between 700 to 895 prisoners in 1916. However, during the 2nd World War it held 2000 prisoners both international and ethnic prisoners, especially South Vietnamese (see more of my photos here).

Prisoners were held either in solitary confinement or in dormitories where they would be shackled together on a raised platform bed, which sloped downwards at the foot. Diseases such as dysentery and malaria were rife among the prisoners along with little medical attention given if at all. An almond tree in the prison courtyard provided remedies in the form of wood, bark, flowers and fruits for these ailments.

The prison became notorious as the temporary home of large numbers of captured enemy soldiers and airmen, mostly American. The American prisoners of war were held in a separate wing apart from the other prisoners. The first American prisoner of war was an airman called Everett Alvarez. Many prisoners died through torture or illnesses before the Vietnamese were able to execute them. The Vietnamese denied any torture took place citing the American prisoners themselves have nicknamed the prison the Hanoi Hilton as the accommodation was as comfortable as a hotel. Prisoners were not granted any civil rights as required by the Geneva convention, but as Vietnam had never signed up to it they claimed it didn’t apply to them.

The ways they tortured the prisoners were numerous. Sleep deprivation, beatings water torture, whipping and slapping, bones broken and teeth knocked out. The Vietnamese were trying to get the prisoners to make statements saying they were being well-treated and that the American invasion was wrong. Food was in short supply and what food they were given was often contaminated with faeces both animal and human. Methods of execution included the guillotine, which was used in the prison and is still there preserved to this day. Both men and women were held in the prison but were segregated.

During the 1990s, virtually all the area was demolished to make way for a modern tower block of apartments and high rise offices called the Hanoi Towers. On the south-east corner of the site, the entrance lobby and a few of the cells have been retained as a small museum. Looking at the remnants of the prison from the opposite side of the road, the building is dwarfed to insignificance by its huge neighbour, making it difficult to imagine its gruesome history. It is well-maintained and has been elevated to a shrine for political prisoners kept here during Vietnam’s struggle for independence. The prison contains several interesting exhibits, including the heavily-used guillotine that was the centrepiece of the French judicial system in Vietnam, and is well worth a visit. The signs describing each of the exhibits are couched in a language that is rather heavy-handedly propagandist, but nevertheless, one becomes acutely aware of the hardship and inhuman conditions of incarceration here.

A 1987 film written and directed by Lionel Chetwynd, “The Hanoi Hilton” tells the story of the suffering, torture, and brutal treatment the American P.O.W.s had to deal with daily while in the Hoa Lo Prison. The film focusses on the resistance the prisoners gave to their captors and the strong bonds formed by the Americans during their captivity.

On the way to the prison we visited the “Ambassador’s Pagoda” (Chùa Quán Sứ). This temple has its origins in the 15th century when a hall was built to welcome ambassadors who came to visit the king. A pagoda was built in the 17th century next to the hall, which has since been called the Ambassador’s Pagoda. The hall was destroyed in a blaze, but the pagoda survived. Nowadays this is one of the most active pagodas in Hanoi, and since 1958 it is the headquarters for the Vietnam Unified Buddhist Association, a major Buddhist learning and research centre, with the largest Buddhist library in any temple in Vietnam. Dozens of young monks reside in the complex and study in its classrooms. Inside of the temple are many finely carved statues, some dating back to the 15th century.

When we visited we saw many young monks and nuns praying in the temple and many faithful were making offerings of incense, fruit and paper money to both the images of the gods, as well as to their ancestors. The air was heavy with the smell of burning paper and even the incense was a heavy, cloying, unpleasant smell. Many little old ladies in the courtyard were selling matches, candles, prayer books and offerings. The temple was quite a large one and more full of life than most of the other temples we visited.

Tomorrow we fly back home. The trip was short, but we packed much in and enjoyed it quite a lot. However, it is great to be going back home as the heat, dirt, noise, overcrowding and congestion has been quite an experience.
Posted by Intelliblog at 04:00