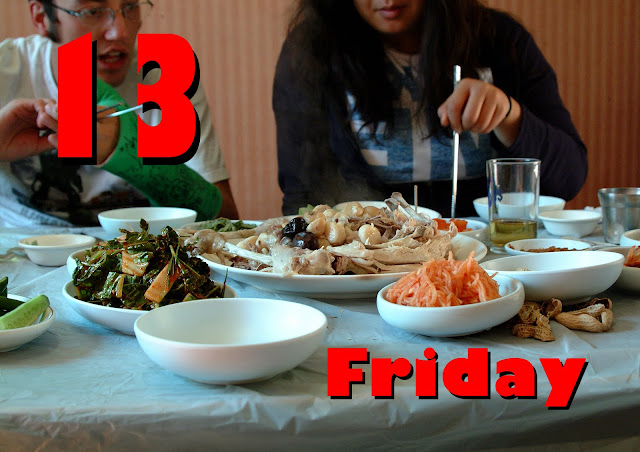 “Many of our fears are tissue-paper-thin, and a single courageous step would carry us clear through them.” - Brendan Francis Behan

It is “Black Friday” today, a dismal day in many people’s books, but depending on one’s cultural background and superstitious nature, the day could be bad, good or indifferent. In Greek, Romanian, Spanish and Latin American culture it is Tuesday the 13th that is an ominous day, not Friday the 13th. Some people consider the number 13 as very lucky, rather than unlucky. The ancient Egyptians and the Chinese both considered 13 as a lucky number. Cultures with lunar calendars and 13 months don’t associate 13 with anything sinister. However, in the USA, in some buildings the 13th floor is apparently skipped, going from 12 to 14 and some hotels will not have a room 13! In some cities a 13th Avenue does not exist, once again 12th skipping to 14th Avenue. It was rumored in the 18th Century that thirteen people sitting down to a meal together presaged that one of them would die within the year, something which is still maintained by some.

This triskaidekaphobia (irrational fear of the number 13) and paraskevetriskaidekaphobia (irrational fear of Friday the 13th) is long entrenched in the Western, Christian tradition and is long associated with the 13 people attending the Last Supper, with Judas Iscariot being the unlucky 13th person. Another dinner with 13 unlucky guests was in Norse mythology, where Loki, the Norse god of evil, started a riot when he gate-crashed a banquet at Valhalla attended by 12 gods. Witches that clearly oppose themselves to a Christian superstition, have groups of 13 known as covens.

As well as Friday the 13th, today is also International Left Handers’ Day. This reminds me of another irrational fear – sinistrophobia (fear of left side, left handedness). It was established by UNESCO in 1984 at the initiative of the British Left-handers’ Club. Left-handers account between 7% and 10% of the world’s population. Many great people were left-handers, among them Alexander the Great, Aristotle, Cesar, Napoleon, Bismarck, Mozart, Rachmaninoff, Leonardo da Vinci, Michelangelo, Einstein and Leo Tolstoy (However, some infamous people were also left-handers, e.g. Jack the Ripper!)

For many centuries left-handers have been thwarted, ostracised, constrained and forced to adapt to a right-handed world. Although nowadays most left-handers are not forced to use their right hand, they still have to cope with the inconvenience of using implements, tools, devices and accessories that are designed for right-handers. If a left-handed option is available it is usually more expensive and not readily available.

The third irrational fear I will refer to is xenositiophobia, quite apt for our Food Friday! Xenositiophobia is an irrational fear of foreign food… Fortunately in most Western countries, this is a fear that we see less of as we are exposed to a wide variety of foreign cuisines more and more frequently in the West. We are very fortunate here in Melbourne as we are extremely cosmopolitan and there hundreds if not thousands of restaurants that offer a variety of international cuisines at a standard that often exceeds that of many restaurants in their original countries!
Posted by Intelliblog at 01:34