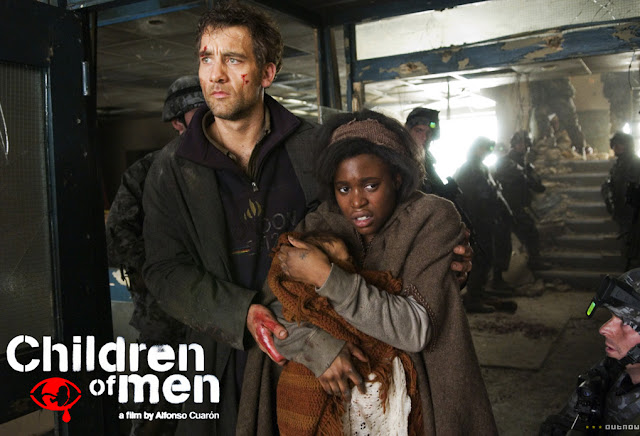 “Children are the living messages we send to a time we will not see.” - Neil Postman

On Saturday night before my trip we got a chance to see a very good movie, which was quite powerful and confronting, but also hopeful in an understated way. It was Alfonso Cuarón’s 2006 film “Children of Men”. It was a stark, violent, harrowing science fiction story of a near-future dystopia, set in a post-apocalyptic England where the future is not so bright nor the world so brave and new.

The movie is set in 2027 AD, where because of an unexplainable, world-wide infertility epidemic, no child has been born for 18 years. Scientists are at loss to explain the reason and the population is gritting its teeth to cope with the mass desperation that this grim reality engenders. African and East European societies collapse and their dwindling populations migrate to England and other wealthy nations around the world in order to survive. In a climate of nationalistic violence and racial hatred, Theo Faron a London peace activist (now turned bureaucrat), joins forces with his revolutionary ex-wife Julian in order to save mankind by protecting a woman who has mysteriously become pregnant.

It is a film that actively questions our present society, its values and morals, its intolerance and lack of understanding. It looks at the problem of refugees, both political and economic, and the violence that can be generated in the wake of renascent nationalism, which is blighting many parts of the world nowadays. These problems are put into context and are given their relative importance by the hypothetical situation: “What if there were no more children born any more?” From this perspective, the other issues covered by the film become almost irrelevant as humanity is confronted with the grim reality of its own extinction – not with a bang but with a whimper…

I found the film especially poignant given the large number of stories that are regularly being aired now of babies killed, abandoned or thrown in the rubbish. The latest example was that of woman who gave birth in the toilet of an aeroplane, disposed of the newborn in the toilet rubbish bin and returned to her seat as though nothing had happened. Fortunately, the baby was saved but this action (whatever its motive) highlights our society’s ills on a fundamental level. The preciousness and sanctity of human life that is immediately obvious when one holds a newborn baby in one’s arms should inspire awe and humility. The film underscores this core idea of humanity that should be inherent in all of us. The disposal of unwanted babies is contrasted with the situation illustrated where no babies are born worldwide and the immense consequences for humanity that this has.

A particularly gripping scene that drove home the message particularly violently was one where the main characters wander into an abandoned primary school, which has become deserted, dirty, unkempt. Vestiges of children’s presence are seen in a few faded and torn drawings, abandoned stuffed toys thrown on heaps of rubbish and rusty playground equipment. “What if there were no more children?” the scene asks and one sees degeneration, decay, extinction.

On the flip side of this is the attendant misfortune of an ageing population and increasing number of elderly people who more than the few young ones see the world without children through eyes that were used to having babies and children around them all the time. People who should have been parents and grandparents see the world change for the worse, consumed by violence and anarchy and there is no hope of a better life, no salvation.

The acting was excellent, with Michael Caine taking great relish in his role as a marijuana-growing senior citizen looking after his invalid wife. Julieanne Moore has a small role, which she plays well, but the honours go to Clive Owen as the reluctant hero Theo Faron. Kee, the young pregnant woman is played ingenuously by Clare-Hope Ashitey and there are some good cameo performances by a variety of character actors. The cinematography is well done and the secondary theme of pollution and environmental despoliation is brought out in all of its awesome dread.

An excellent film, although full of violence and images that may shock some people, I recommend it most highly as a movie that will make the viewer think and ruminate upon many of the current issues that plague our society this day and age. The movie is based on the 1992 novel by P.D. James, and although the film is an adapted version, it is said to have pleased the author.
Posted by Intelliblog at 20:06