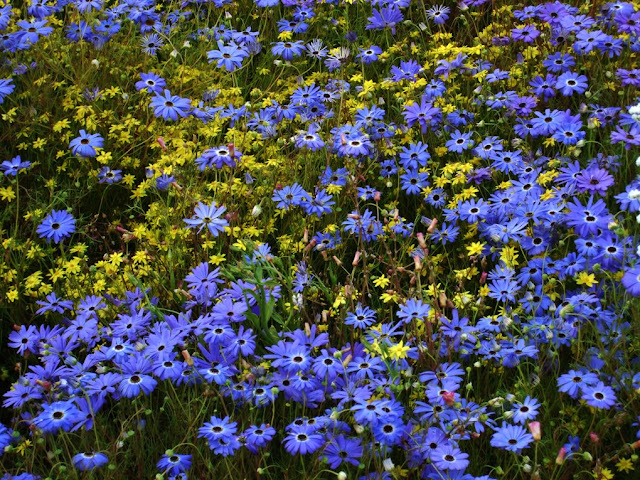 “God writes the gospel not in the Bible alone, but on trees and flowers and clouds and stars.” - Martin Luther

Yesterday evening, after work I managed to visit King’s park in Perth. This is a magnificent site a stone’s throw away from the city centre and consists of extensive parklands (400 hectares!), botanic gardens, function rooms, a café, a restaurant, a gallery and tourist shops. Although the park is good to visit all year round, it is exquisite in September when the native wildflowers are in bloom. I took the free Red Cat bus from the city centre to the Havelock St stop just near the park entrance, and then walked up the magnificent ghost gum lined driveway to the park’s main tourist area. The panoramic views from there, even from a stationary vantage point, extend across the city, to the hills, and down the river. The city views make for an obligatory photograph from the top of the hill and one can see the numerous tourists lining up and pointing the camera at the panorama.

However, King’s Park offers far more than breathtaking views. Of its 400 hectares, approximately two thirds are bushland, which during the wildflower season (September and October), comes alive with colour. The famous wildflowers of the Western Australian outback are well represented here and even if you cannot make it to the wilds off the beaten track, you can enjoy the wildflowers about 1.5 km from the Perth city centre. The remaining third of King’s Park comprises beautifully landscaped gardens, picnic and barbeque areas and playgrounds.

Because of its extensive size, the park is fully serviced by roads to make it accessible to cars, but also more importantly, there are many paths and trails for the visitors on foot. Although one can explore them oneself, one can also take a free guided walking tour. These start every day at 10 am at the Karri Log. Most of the flowers and trees are identified by their scientific and common names with small plaques, making it easy even for the layperson to know what is growing in the Park.

King’s Park is also a site highlighting certain aspects of Western Australia’s history. In addition to the main war memorial, which contains the names of all soldiers lost during the first and second world wars, the Park’s roads are lined with trees, at the base of which there are plaques laid in memory of individual fallen soldiers. This is a touching reminder of the toll Australia had to pay while fighting wars on distant foreign lands. Standing by one of these trees and reading a name on a plaque that reminds one of a soldier long dead, killed in the prime of youth for an idea, for freedom; and gazing up at the tall green tree is a humbling experience.

In Summer, King’s Park is a must to visit at night. The drive up the main road in King’s Park lined with ghost gum trees that are spot-lit and look like an otherworldly marching army of sentinel guards. Recently, during Summer, the people of Perth have been treated to cinematic and thespian delights in Kings Park. The Sunset Cinema, which screens outside in the Lakeside Picnic Area shows classic, art-house and cult movies. Also, local and interstate theatre companies often put on a production, usually Shakespeare, in the idyllic surrounds of the Park, including recent productions of “Taming of the Shrew”, and “Romeo and Juliet”.

One of my favourite areas of the park is the Federation Walkway, which rises high up amongst the treetops and not only affords magnificent views of the surrounds, but also makes for a good platform for observing the birdlife and flora. The Walkway extends 620 metres through the Botanic Garden along a combination of on-ground pathways and a spectacular elevated 52 m glass and steel arched bridge suspended amongst a canopy of tall eucalypts.

Another favourite of mine is the water garden, which wends its way through multiple levels and incorporates waterfalls, rock gardens, cascading rills and tranquil pools where ducks dive and swim, providing the visitor with the venue for a tranquil walk and a wonderful soul-raising experience.

Back home tomorrow, with an excellent trip both work-wise and as a change to the routine!
Posted by Intelliblog at 00:51