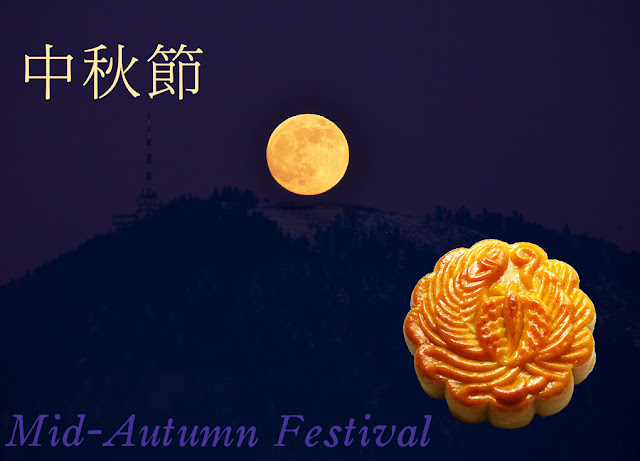 “There is something haunting in the light of the moon; it has all the dispassionateness of a disembodied soul, and something of its inconceivable mystery.” - Joseph Conrad

As is the case with every trip, when I return to the office there are a number of things to do and lots to catch up on. Today was no exception and the day flew by with non-stop meetings, people dropping in to see me, correspondence to attend to. I was in at seven in the morning and managed to sneak away at 5:30 p.m. For lunch, I had a couple of fruits at my desk and that was while I was answering emails. A pleasant surprise was a Chinese colleague who came in and brought me a moon cake as tomorrow is the Mid-Autumn Festival.

This is also called the Chinese Moon Festival (中秋節), which is on the 15th of the 8th lunar month. Just like Christmas and Thanksgiving in the West, the Moon Festival is one of the most important traditional holidays for the Chinese. Many legends abound regarding this Festival and the story of Houyi is told at this time:

Houyi was very good at archery. There were once ten suns in the sky, which made plants wither, and fierce beasts to run wild and imperil people. It was too hot to live under the ten suns. To save the people, Houyi started to shoot the suns. He shot down nine of them one by one, and he might have shot the last one if he was not called off by the people. Thus the severe drought was gone and the wild beasts went away. It is said Houyi’s wife was Chang Er, who swallowed the elixir stolen from her husband, and she flew to the moon and became the goddess of the moon. She has lived in the palace on the moon ever since. Houyi was killed by Fengmeng, a disciple of Houyi who learned to shoot from him. You might see Chang Er dancing on the moon during the Moon Festival.

The Moon Festival is also a romantic one. A perfect night for the festival is if it is a quiet night without clouds and with a little mild breeze from the sea. Lovers spend such a romantic night together eating moon cakes with some wine while watching the full moon. Even for couples who can’t be together, they too can enjoy the night by watching the moon at the same time so they can feel that they are together at that moment.

Here is a poem I wrote for this occasion:

Gazing at the clear sky on this Spring night
And looking at the full moon of September,
A distant northern Autumn I remember
When you were near, and your eyes were bright.

The stars are sparkling and the garden fragrant
The night is cool and air crisp as a crystal bell.
Spring flowers bright, in moonlight flagrant
But memory’s fallen leaves sad tales will tell.

We shared a moon cake under full moon’s light
And laughed as autumn winds blew candles out;
Now I can find no trace of you about –
I loved, you left, the moon’s the mistress of the night.

The Autumn full moon in Spring is mocking
My thoughts, remembrances, feelings frozen;
My life so empty, and your absence shocking
This lonely path we tread as we have chosen.

Tell me pale Moon, does she too gaze on you tonight?
Could she perhaps be thinking of me, in your silver light?
Posted by Intelliblog at 01:46