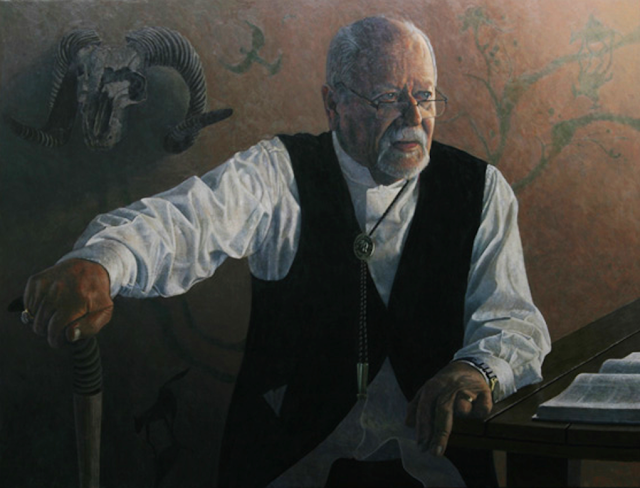 “Every portrait that is painted with feeling is a portrait of the artist, not of the sitter.” – Oscar Wilde

The flight to Perth was uneventful and surprisingly short – just under three-and-a-half hours instead of the usual four. On landing in Perth, I set my watch two hours earlier, which gives one an idea of the vastness of Australia. The weather was perfect: Sunny and a balmy 18˚C, which was soon to climb to an equable 22˚C. Tomorrow the temperature will reach a maximum of 23˚C and on Tuesday, 26˚C! I went for a walk and admired the beautiful flowers in bloom everywhere – Spring is truly here in Western Australia! By chance I came across an exhibition in the Perth Town Hall, which I hastened to view. It was the City of Perth Black Swan Prize for portraiture.

In 2010 artists from across Australia vie for the Lester Group Prize of $30,000 and the Perrine People’s Choice Prize of $7,500. All paintings submitted for this competition/exhibition must be of well known or well respected Australians. The exhibition was quite amazing. There were over 40 paintings, with a vast array of styles and techniques, but all of them exceedingly well-crafted and as far as capturing the essence of the person who sat for the portrait goes, most of them were quite successful in presenting a cameo of the persona of the sitter. I liked several of these portraits (and you can view all 42 finalists on the site above), but the one I have posted was definitely one of my favourites. It is a portrait of Robert Juniper by Nigel Hewitt. The painting is rather somber, befitting the subject. Juniper is a Western Australian artist who studied commercial art and industrial design at Beckenham School of Art in England.  He returned to WA in 1949 and taught art. Since 1974, Robert Juniper has devoted himself full-time to painting, sculpting and printmaking. Recognised as an artist of poetic and spontaneous vision, Juniper has established himself as one of Australia's leading painters. He is best known for his evocative depictions of the West Australian landscape. His main influences range from English painters of the early 1900s, Paul Klee, and Japanese work of the 19th century, through to his contemporary, Australian artist, Sam Fullbrook.

Nigel Hewitt is a visual artist based in Perth, Western Australia. His images are most frequently mixed media on canvas, with subjects ranging from contemporary environmental and political issues to the personal and ambiguous notions of discovery and existence. His portrait of “Bob” is intimate and powerful. The artist’s aged face and distant gaze challenges approaching death that is symbolised by the skeletal ram’s head behind him. Although he is supported by a stick, his powerful hands grasp firmly and he looks into the light, like a true visionary. An artist paints another artist with an understanding that may be lacking if the sitter has different profession…

It is interesting that most of the portraits were photorealistic and unfortunately that means for quite a few of them quite lifeless. One or two that strove for originality were rather mundane but one or two were very quirky and hence memorable. Overall it was an enjoyable experience and just right for Art Sunday!

Borders had a sale of CDs, with any four CDs in the store for $30. I couldn’t resist of course and bought quite a few good ones, saving about $150 on the regular prices! It was quite an amazing buy, also considering that many of the ones I bought I wouldn’t have found in Melbourne at that price… I also bought a new shirt and tie for tomorrow as they were also on special (not in Borders)!

I finally went by our campus and inspected the facilities. The cleaners had done a good job, everything was in order for the panel tomorrow. Thus assured, I finally came back to the Hotel and had a lovely bath, soaking in the tub for about 40 minutes. There’s nothing as restful after a long trip and a few hours of walking. I dined at the club rooms and had some excellent little tidbits washed down with champagne, finishing off with some luscious and sweet strawberries that smelt delightfully and tasted even better.
Posted by Intelliblog at 01:52