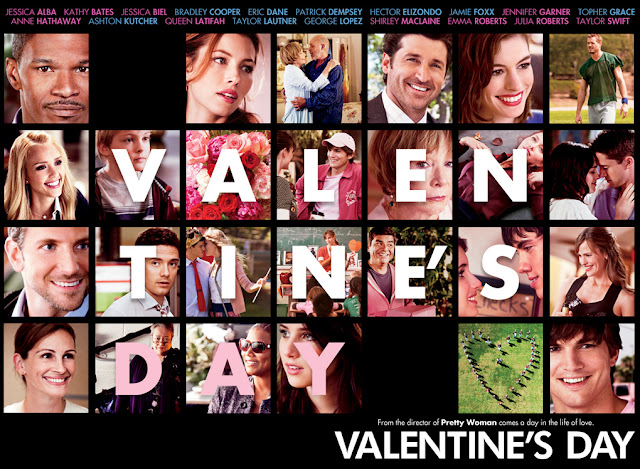 “Love is being stupid together.” - Paul Valéry

Last weekend we watched a very lightweight movie, a typical romantic comedy chick-flick. It nevertheless was easy to watch (yes, I dozed a little!) and even managed a couple of poignant moments (I’m getting mushy in my old age, OK?). However, for the most part it was formulaic Hollywood and it even managed to make Los Angeles look like it was heaven on earth. The film was Garry Marshall’s 2010 “Valentine’s Day” which gets a 5.7/10 on IMDB. This may be quite a good mark given the quality (or lack of) in the film.

It reminded me a little (slight resemblance!) of Richard Curtis’s 2003 “Love Actually” which IMDB rates at 7.8/10. I agree with the ratings, “Love Actually” was a much better film. Similarly, it reminded me superficially of the 1999 “Magnolia” - Paul Thomas Anderson’s dramatic and intense film, also much superior and rated at 8.1/10 on IMDB.

Now back to “Valentine’s Day”. It is fluff and nonsense, manufactured for a certain market and produced quickly with small regard to “artistry” or deeper meanings. Even the poignancy is trite and the storyline predictable. The last few minutes of the film attempt to inject some surprise, but even this fails to save the whole of the movie. The movie is pink through and through and calculated to please the crowd that “oohhs and aaahs” over red Valentine hearts and stuffed cute animals. An added bonus for this audience is the cavalcade of stars that act in the film, including a very old Shirley MacLaine as well as the more recent spunks to lust over.

The film is constructed of interconnected stories all of which are tied in one way or another with florist Reed (Ashton Kutcher) who is struggling with a foiled romance and a refusal to his proposal on Valentine’s Day, while he is also trying to work through the busiest day of the year for florists. A whole crowd of people around Reed act in predictable situations, and there are many clichés that make this romantic comedy quite trite and overly long (125 minutes – cut version!).

Three couples wake up together, but each of their relationship will have to navigate rough straits. A TV sports reporter gets an assignment to find romance in LA and can’t cope with the mush. A primary-school boy wants to buy flowers for his first true love. A high school couple of students plan first-time sex at noon on Valentine’s Day. An ageing star football player contemplates his future and his lack of family. Two strangers meet on a plane and they are both connected with the story. Grandparents (of the primary school boy) face a relationship crisis, and an “I Hate Valentine's Day” dinner of the lonely and the betrayed initially looks as though it may doomed, but suddenly is well-attended.

The movie was made fairly quickly and is a pot-boiler. Don’t go looking for artistic effects, expert direction, good editing and stand-out performances. All is adequate and even the big stars (e.g. Julia Roberts) end up having almost cameo roles. The humour is not subtle, but also lacks class and one may giggle once or twice, but no belly laughs. The poignant scenes are calculated and inserted for best effect at appropriate points. There are token racial-, sexuality- and gender-based choices in the story and each of the subplots is neatly resolved – it is a romantic comedy after all.

OK, should you watch this movie? Well, do not go out of your way to find it, unless you think 1.5 tall white stuffed toy gorillas carrying love hearts delivered on Valentine’s Day to your place of work is “just adorable”. If you happen to catch this movie playing on TV or cable and there is nothing else around and you have a couple of hours to kill (or even steal forty winks), then yes, by all means watch it. Simalarly if your video store has it on special get it if you want something mindless and predictable.
Posted by Intelliblog at 21:37