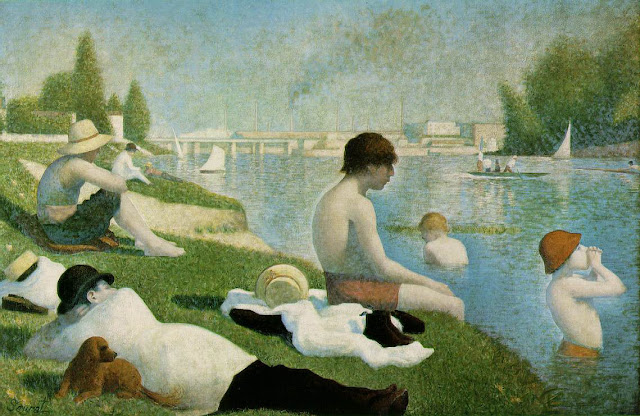 “Some say they see poetry in my paintings; I see only science.” – Georges Seurat

For Art Sunday today, Georges Seurat (1859-1891). He was the founder of the 19th-century French school of Neo-Impressionism whose technique for portraying light and colour using tiny brushstrokes of contrasting colours became known as Pointillism. Using this technique, he created large compositions with tiny, detached strokes of pure colour too small to be distinguished when looking at the entire work from a distance, but making his paintings shimmer with brilliance. Seurat was the ultimate example of the artist as scientist. He spent his life studying colour theories and the effects of different linear structures. His 500 drawings alone establish Seurat as a great master, but he is remembered for his technique of pointillism, or divisionism.

Seurat studied at the École des Beaux-Arts in 1878 and 1879. His teacher was a disciple of Jean-Auguste-Dominique Ingres. Young Seurat was strongly influenced by Rembrandt and Francisco de Goya.  After a year of military service at Brest, Seurat exhibited his drawing “Aman-Jean” at the official Salon in 1883. Panels from his painting Bathing at Asnieres were refused by the Salon the next year, so Seurat and several other artists founded the Societé des Artistes Indépendants. His famous canvas “Sunday Afternoon on the Island of the Grande Jatte” was the centrepiece of an exhibition in 1886.

By then Seurat was spending his winters in Paris, drawing and producing one large painting each year, and his summers on France's northern coast. In his short life Seurat produced seven monumental paintings, 60 smaller ones, drawings, and sketchbooks. He kept his private life very secret, and not until his sudden death in Paris on March 29, 1891, did his friends learn of his mistress, who was the model for his painting “Young Woman Holding a Powder Puff”.

Here is his “Une Baignade, Asnières” (Bathing at Asnières) of 1883-84 (retouched 1887). This is a huge canvas, 2 metres by 3 metres, and it was Seurat’s first large-scale work. The picture was exhibited at the first Salon des Indépendants in 1884 and in 1886 was one of the “Works in Oil and Pastel by the Impressionists of Paris” exhibited by Durand-Ruel at the National Academy of Design in New York. Too original to find immediate favor either in Paris or New York, it received harsh criticism. The critic in an American paper who described “Une Baignade” as the product of “a vulgar, coarse and commonplace mind” seems with every epithet to present the exact opposite opinion to that with which the work is regarded now.
Posted by Intelliblog at 01:32