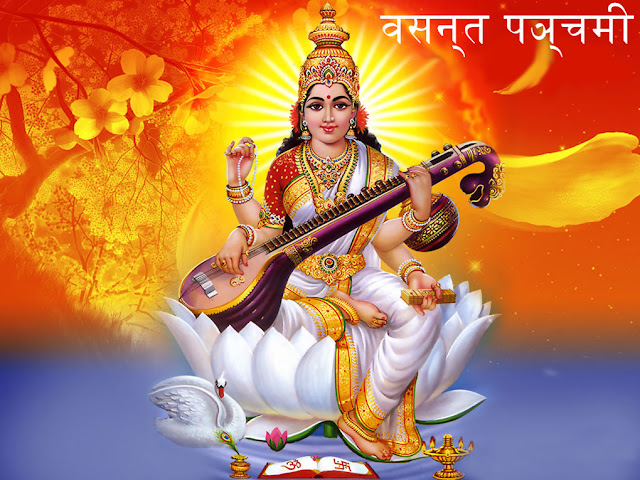 “I believe that all wisdom consists in caring immensely for a few right things, and not caring a straw about the rest.” - John Buchan

Today is the Hindu Festival of Vasant Panchami. Vasant Panchami is devoted to Saraswati, the goddess of knowledge, music and art. It is celebrated every year on the fifth day (i.e. Panchami) of the Indian month Magh (January-February), the first day of spring. During this festival children are taught to write their first words, under the tutelage and protection of the goddess. Most educational institutions organise a special prayer for Saraswati and invoke her guidance and protection.  Pens, notebooks, and pencils are placed near the goddess’s feet to be blessed before they are used by students. Brahmins are fed and ancestor worship is performed, while the god of love Kamadeva is worshipped. The colour yellow rules this festival, with people usually wearing yellow clothes and the goddess Saraswati herself, being worshipped dressed in yellow. Children are give yellow-coloured sweets and customarily will fly kites on this day.

Saraswati is the consort of Brahma, and her name derives from the Sanskrit word “saras” (meaning ‘flow’) and “wati” (meaning “woman”). Initially Saraswati was a river as well as its personification as a river goddess. In the post-Vedic age, Saraswati began to lose her status as a river goddess and became increasingly associated with literature, arts, music, learning and knowledge. In Hinduism, Saraswati represents intelligence, consciousness, cosmic knowledge, creativity, education, enlightenment, music, the arts, and power. Hindus worship her not only for secular knowledge, but for “divine knowledge” essential to achieve liberation from the cycle of reincarnation (moksha).

Saraswati is shown with four hands, which symbolise ego, intellect, alertness and mind. She carries a lotus and scriptures in two of her hands and she plays music on the veena (an instrument similar to a sitar) with her other two hands. She rides on a white swan. Her white dress is a symbol for purity. The swan signifies that people should have the ability to discern good from evil. If the goddess is depicted sitting on a lotus, it is an indication of her wisdom and veracity. When the goddess is shown sitting on a peacock, it is a reminder that a strong ego can be held back by wisdom.

Vasant Panchami marks the end of the winter season and welcomes Spring. Yellow signifies the brilliance of the sun and the vibrancy of life. During the Vasant Panchami festival, India’s crop fields are filled with the color yellow, as the yellow mustard flowers at this time of the year. Hindus will prepare and feast on a special pastry called kesari halwa, which is made from flour, sugar, nuts, and cardamom powder and saffron strands. Saffron gives the sweetmeat a vibrant yellow color and its distinctive fragrance.

The holiday is celebrated with great splendour and affection in India and it is a public holiday. Government offices, schools, colleges are closed on this day. Some private offices are operational as is public transport, however, there is heavy traffic due to many processions at various places.
Posted by Intelliblog at 21:36