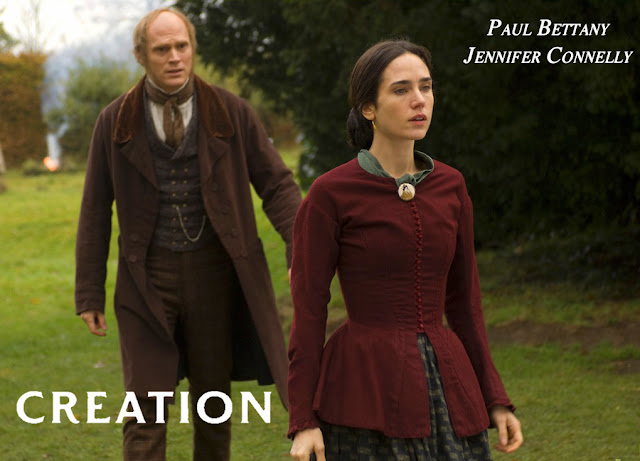 “All evolution in thought and conduct must at first appear as heresy and misconduct.” – George Bernard Shaw

We watched a good film at the weekend. It was a historical/biographical drama co-produced by the BBC, which usually does an excellent job of such productions in terms of scenery, detail, atmosphere and settings. It was Jon Amiel’s 2009 film “Creation”, which dealt with the part of Charles Darwin’s life relating to the death of his daughter and his psychological struggles to come to terms with it. It is very much an interpolation so, often, historical fact has been sacrificed in the name of poetic licence. The resulting film should therefore not be taken as gospel truth and thus it is not suitable for high school educational purposes (especially in the sciences). However, I found it quite suitable as film to be shown in relation to teaching psychology and counselling as the plot primarily revolves around the loss of a child and a family’s trials in dealing with this.

Darwin’s theory of evolution and his book “The Origin of the Species” (a masterpiece of scientific enquiry) transformed ideas about the creation of the world and many hailed it as evidence against the existence of God. This was not Darwin’s intention and the ideas represented in this book are not contrary to the existence of God, but rather it is a warning against taking the Bible literally. The book of Genesis is a magnificent allegorical creation myth, akin to the creation myths of other religions. Accepting Genesis as a creation myth does not preclude faith in God nor does being a scientist mean that one cannot be a true believer. Much of what we have produced in our literature, in our art, in our most beautiful and inspired of activities has been for the glory of God.

The film, however, does have as one of its strong subplots, the debate between creationism and evolution (anachronistically and with poetic licence) placed within the context of Darwin’s struggle to complete his book “The Origin of the Species”, while coping with the loss of his daughter. It makes a good movie, but most of what is depicted is far from reality. As long as one is aware of this and makes allowance for the inaccuracy, one can enjoy the film for what it is: A man’s struggle with the death of his child, his faltering relationship with his wife and his estrangement from his other children. All this, while he is debating within himself the existence of what seems to be a cruel, vindictive God who takes innocent lives without any reason. Darwin may have become an atheist, but this is not the subject of the movie.

Darwin’s famous voyages are referred to in the film, and there are tantalising flashbacks to anecdotes that he relates to his children, but so much more could have been made of these –then again the film would have been a long mini-series, not a 108 minute movie. On the matter of flashbacks, oh boy! This movie has flashbacks, flashforwards, dream sequences, sequences of altered perception of reality, so many, that we the poor viewers have to wonder sometimes what is going on, is it past, present, future, or part of Darwin’s tortured view of reality where he sees his daughter’s ghost. This is the director’s fault as he co-wrote the movie with John Collee, based on the novel “Annie’s Box” by Randal Keynes. It is “arty” and meant to keep our interest up while “educating us” in terms of our artistic development as cultured cinephiles, but it got to be quite annoying really…

There is much in the movie and some scenes are very repetitive, especially so Darwin’s “loss of mind” and his extreme grief in reaction to his daughter’s death. There could be much removed from these scenes without impacting on the movie, and there is so much more that could have been added to clarify our perception of “Darwin the Scientist” as opposed to “Darwin the Man”. Paul Bettany does a great job acting the part of Darwin and relishes every second of his screen time. There is much praise to be given to his performance, although he very nearly overacts on occasion. Jennifer Connelly as Darwin’s wife also does an admirable job and looks quite stunning in many scenes, which she plays with more restraint. Top honours to Martha West who plays the ill-fated Annie Darwin, their young daughter. A winsome performance played with gusto and the right touch of poignancy.

The music by Christopher Young was saccharine for the most part and designed to twang the heart-strings, often verging on the maudlin. I enjoyed more the apt classical pieces that were used appropriately as Mrs Darwin was playing the piano and exteriorising her emotions. Overall, though, an enjoyable film which I recommend highly, provided one is aware of its shortcomings on the historical front and the business of flashing (forward and backward). The atmosphere is right and the film looks wonderfully authentic. It is touching and tender in parts, while at the same time psychologically tense and suspenseful in others.
Posted by Intelliblog at 21:58