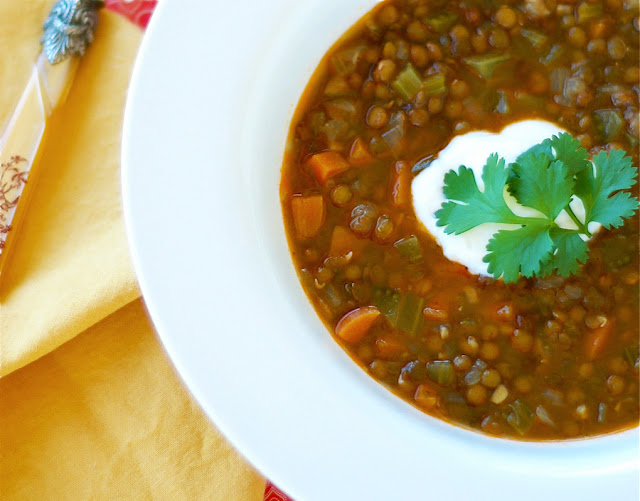 Lentils are a wonderful food – packed with nutrients, easy to cook in a variety of ways, easily complemented by many different flavours, they are a staple food in many cultures and available year-round. Lentils, like beans and peas, are legumes and are full of protein, fibre and micronutrients like molybdenum, manganese, iron, magnesium and copper. Their high content of fibre lowers cholesterol actively, and they aid in managing blood-sugar disorders since their high fibre content prevents blood sugar levels from rising rapidly after a meal. Lentils also provide good amounts of two B-vitamins with virtually no fat.

Lentils originated in central Asia, having been consumed there since prehistoric times, and are one of the first foods to have ever been cultivated. Lentil seeds dating back 8000 years have been found at archaeological sites in the Middle East. Lentils were mentioned in the Bible both as the item that Jacob traded to Esau for his birthright and as a part of a bread that was made during the Babylonian captivity of the Jewish people. Before the 1st century AD, they were introduced into India, a country whose traditional cuisine still treasures a spiced lentil dish known as “dal”. In many Catholic countries, lentils have long been used as a staple food during Lent. Currently, the leading commercial producers of lentils include India, Turkey, Canada, China and Syria.

Lentils came to mind today as there is a restaurant chain in Melbourne known as “Lentil as Anything”. The good thing about these eateries is that not only do they provide good and nutritious food that is vegetarian and organic, but that what you pay depends solely on you, the customer! You pay what you think the food is worth and what you can afford. It is a fantastic idea and this non-profit food chain provides training and educational opportunities for marginalised people, as well as tasty vegetarian food for its customers. All funds collected by the operations goes to a range of services that help new migrants, refugees, people with disabilities and the long-term unemployed. Most people do not abuse the privilege of being allowed to donate what they can afford into the collection box and you pay what you can in a collection box, anonymously. Most people who eat there are generous and honest, but unfortunately there are some rat bags too…

This is the case in an incident that happened to Ousman Ngom, the manager of the Footscray branch of “Lentil as Anything” on Wednesday evening. While he was out shopping for the restaurant, two men set upon him with a knife and left a 10 cm gash from his ear to his mouth. He had to have plastic surgery. The attack is thought to have had a “revenge” motive as the two attackers were told the previous night to leave the restaurant as they were using foul language and being disruptive. It is sad that the attackers, who were arrested by police, are teenagers 18 and 19 years old.

Unfortunately, this is not an isolated incident in the Footscray branch of the chain, which has had many incidents of violence and disruptive behaviour. The general manager even toyed witht eh idea of getting a security guard! As this was one of the most violent and cowardly of attacks, the future of the restaurant in Footscray is now uncertain. It may well close. It goes to show that even when some people go out of their way to help their fellow human beings, they spend their lives doing good, being what each one of us should be, they may find themselves reaping violence and ingratitude as a reward for their good deeds. Some humans are inhuman, regrettably…

Here is a web page that has a wealth of different lentil recipes.
Posted by Intelliblog at 00:14