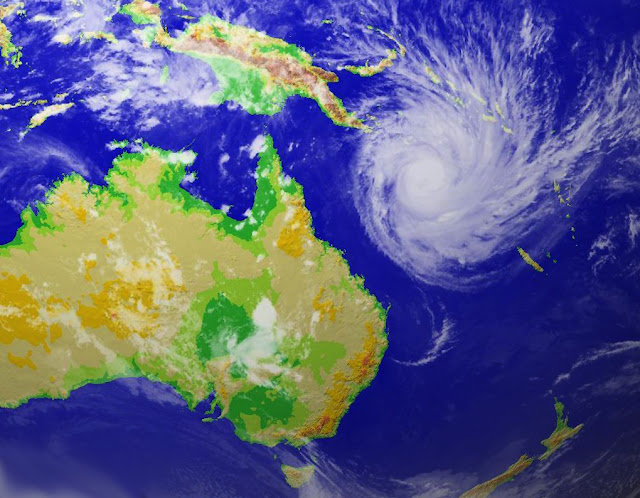 “The insufferable arrogance of human beings to think that Nature was made solely for their benefit, as if it was conceivable that the sun had been set afire merely to ripen men's apples and head their cabbages.” - Savinien de Cyrano de Bergerac

Another natural disaster has wrought havoc in Queensland. This time the might of a tropical cyclone has all but destroyed one town (Tully) as its fury was unleashed on the coast and havoc was wrought once again on a state that was already suffering the effects of the deadly floods a couple of weeks ago. The fortunate thing about this disaster (if fortunate can be used in this context…) was that at least the cities of Townsville and Cairns were spared and to date there have been no reports of deaths, although a man is missing.

On the news this morning, there was a flash flooding warning as the forecast was for thunderstorms and possible heavy rains in localised areas. News from the USA tell of massive storms that have covered half the country in record snow fall. Reports from other parts of the world also have news of extreme conditions and unruly weather phenomena that have not been experienced within living memory.

These extreme weather disruptions seem to be occurring with alarming frequency these past few years, fuelling the climate change debate. The firm believers of the theory that the earth has started to undergo changes consistent with the greenhouse effect due to excess carbon dioxide in the atmosphere produced by human activity, point to the changing weather as evidence. Skeptics of the theory point to statistics that go back (in some cases) for many decades or centuries, and the climatological evidence locked in sedimentary rocks, thousand-year-old ice deposits in the polar regions and to the fossil record going back for millennia that all demonstrate extreme weather conditions are a cyclical occurrence and we humans have to accept that we live on a friendly, yet whimsical planet!

I mentioned above the phrase “living memory”. This is such an anthropocentric and flippant yardstick when one looks at conditions that affect our planet and have cycles that recur every 10,000 or every 100,000 years – both of these time periods a mere fractions of a second (relatively speaking) on a cosmic scale. In earth’s 4.5 billion year history there have been so many extreme upheavals – in weather, geology, biology – that we puny humans, a late arrival in earth’s history, talk about events in “living memory” and ignore the evidence of billions of years and think in terms of the human lifespan. How insignificant we are, in cosmic terms!

When looking at the weather conditions in the last 10,000 years we are really blessed. Before that, our distant ancestors had to cope with an ice age that lasted for centuries. The big thaw was followed by weather that has been remarkably temperate. It is no surprise that now we are seeing some extremes. Perhaps over the next 500 or 1000 years our planet will experience yet another cyclic ice age (long overdue according to some scientists) –whatever we may choose to do or not do.

It is true that as species we are biologically successful. Within a remarkably small time period (three million years is a mere wink on a cosmic scale, remember) we have become the dominant species on earth. We have altered our environment on a massive scale and have forced thousands upon thousands of other species into extinction. We have selectively created conditions that favoured other species, while using up natural resources on an unprecedented scale – especially so in the last 100 years or so. As a species, we are resourceful and inventive, adaptable and intelligent, but unfortunately not wise (at least collectively speaking).

We pride ourselves on the technology that we have created and which allows us to have control over most of the processes and events around the planet, but compared to the might of Mother Nature, our power is risible. We may have sent man to the moon, yet we cannot control a category five tropical cyclone as it pummels into the shore. We may update our Facebook account and ring each other on iPhones, but we cannot control flood and drought. We may stage decadent, elaborate banquets or transmit the inanity of Master Chef programs on TV, yet millions of our own kind die of starvation annually…

My word for today is fittingly:

hubris |ˈ(h)yoōbris| noun
Excessive pride or self-confidence. Hubris often indicates being out of touch with reality and overestimating one’s own competence or capabilities, especially used in the context of people in positions of power.
• (In Greek tragedy) excessive pride toward or defiance of the gods, leading to nemesis.
DERIVATIVES
hubristic |(h)yoōˈbristik| adjective
ORIGIN Greek - ὕβρις
Posted by Intelliblog at 09:39