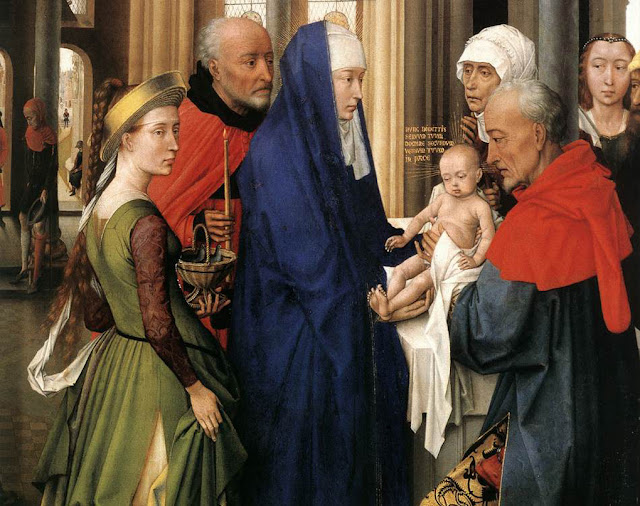 Today is Candlemas (and/or Groundhog Day if you are in North America). Candlemas is officially known as the Feast of the Presentation, and commemorates the purification of the Blessed Virgin Mary and the presentation of Christ in the Temple, which took place 40 days after His birth as Jewish law required. According to Mosaic Law, a mother who had given birth to a boy was considered ‘unclean’ for seven days. Also, she was to remain 33 days ‘in the blood of her purification’.

In Luke there is a passage quoting Exodus 13:2,12, that Mary and Joseph took Jesus to Jerusalem because every firstborn child was to be dedicated to the Lord. They also went to sacrifice a pair of doves, showing that Mary and Joseph were poor. Once in the Temple, Jesus was purified by the prayer of Simeon, in the presence of Anna the prophetess. Simeon, upon seeing the Messiah, gave thanks to the Lord, singing a hymn now called the Nunc Dimittis:

Lord, now you let your servant go in peace,
Your word has been fulfilled:
My own eyes have seen the salvation,
Which you have prepared in the sight of every people:
A light to reveal you to the nations
And the glory of your people Israel.

The common name for the feast, Candlemas, comes from the activities associated with the feast. It came to be known as the Candle Mass. In the Western Church, a procession with lighted candles is the distinctive rite. According to post Vatican-II discipline, (if possible) the beeswax candles are to be blessed somewhere other than where the Mass is held. During the procession to the church, the Nunc Dimittis is sung, with the antiphon ‘Lumen ad revelationem’ (Luke 2:32). This procession into the church for Mass commemorates Christ’s entrance into the temple. Since Vatican II, the feast is reckoned a feast of the Lord (as opposed to a feast of Mary), and officially designated “The presentation of the Lord”.

“If Candlemas Day is bright and clear,
there’ll be two winters in the year.”

Every February 2nd, people gather at Gobbler’s Knob, a wooded knoll just outside of Punxsutawney, in Pennsylvania, USA. They observe a humble groundhog (dubbed ‘Phil’) as it comes out of its burrow, and observe it to see whether it casts a shadow or not. This event in Punxsutawney was held in secret from 1887 until 1966, and only Phil’s ‘prediction’ was revealed to the public. Since 1966, Phil’s forecast has been widely broadcast by the media.

The groundhog comes out of his electrically heated burrow, looks for his shadow and ‘utters’ his prediction to a Groundhog Club representative. The representative then ‘translates’ the prediction for the general public. If Punxsutawney Phil sees his shadow, it means six more weeks of winter. If he does not see his shadow, it means spring is just around the corner. Approximately 90% of the time, Phil sees his shadow.
Posted by Intelliblog at 21:03