A SONG FOR THE OLYMPICS 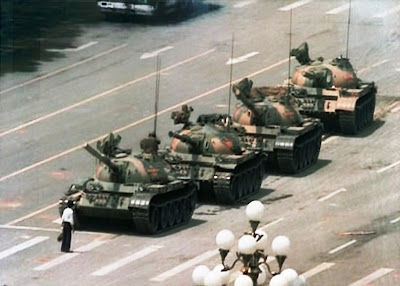 “Peace is not a passive but an active condition, not a negation but an affirmation.”  - Mary Roberts Rinehart

The world has its eyes turned toward Beijing, watching the brilliant displays of pyrotechnics from the Olympic Stadium. A magnificent spectacle, an ancient civilisation showcased, thousands of people giving their all to present to the world a culture and a power worthy of any of the great empires that have been and gone on earth. A cavalcade of the Olympic ideals of noble competition, peace, culture and humanity at its best. The bright lights, the spectacular dancing, the songs, the fireworks, the wild shouting of the bewitched crowds all so infectious. The wild exhilaration draws attention away from the world’s problems. People are willing once again to rush towards circuses and bread in an attempt to forget…

The huge expanse of the Square of Heavenly Peace – are there any traces of blood still remaining on the pavement or have the shuffling feet of the dancing multitudes expunged every trace? The gaols of the regimes that have been – how many people were tortured, killed, forever vanished as though they never existed? Further to the West, Tibet an open wound… Georgia and Russia have their own games to play as soldiers ignite their deadly versions of fireworks. The Middle East with its incessant suicide bombings, the maimed and injured mingling with the dead. Africa and its painful sores, where internecine warfare robs its lifeblood, ill-afforded waste as deadly disease is a more powerful enemy. Shaky world economies and uncertain futures as global climate change threatens a whole planet, are all forgotten as we enjoy the show that cost $8,500 per second!

Folly of follies, as steroid-enhanced athletes break records as if they were crystal goblets. Madness, as people are carried away by the nationalistic pride that swells as gold medals are claimed. Gross stupidity as overweight couch potatoes consume take-away pizza, drink beer and shout encouragement to athletic heroes they vicariously live through. Idiocy of athletes who live a false life chasing elusive fame and fortune in the stadium, the swimming pool the track. Empty heads and beautiful, well-trained bodies living the life of easy pleasure and drinking the heady wine of success…

Oh, if only each of us had what we each lacked!

Here is François Villon’s Prayer as set to music by Bulat Okudzhava and sung by Zhanna Bichevskaya.

The Prayer of François Villon

While the world is still turning, and while daylight is still broad,
Oh Lord, please give everyone what they lack.
Give the timid man a horse to ride, give the wise one a full head,
Give the fortunate one some money, and don't forget about me.

While the world is still turning, Lord, You are omnipotent,
Let those striving for power, wield it to their heart's content.
Give a break to the generous, at least for a day or two,
Pray, give Cain repentance, and remember me too.

I know You are almighty, and I believe You are wise;
Like a soldier killed in a battle believes he's in paradise.
Like every creature believes, oh, my Lord, in You,
Like we believe, doing something, not knowing what we do.

Oh Lord, oh my sweet Lord, my blue-eyed Lord, You're good!
While the world is still turning, wondering, why it should,
While it has got sufficient fire and time, as You see,
Give to each a little something and don’t forget about me!

Posted by Intelliblog at 03:09 0 comments 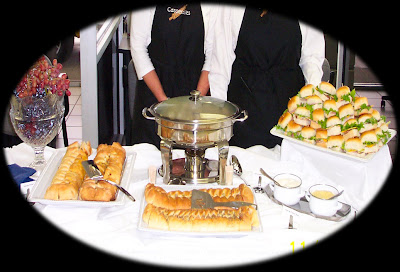 "The ambition of every good cook must be to make something very good with the fewest possible ingredients." - Urbain Dubois

Do you ever get the days when you feel like having a nice meal, you couldn’t be bothered going to a restaurant, you dislike fast food that you get at the take-away places of phone for and yet you don’t have the energy or inclination to cook a meal from scratch? We do, and it is those days that “Cheaters’ Cuisine” comes to the rescue. I call “Cheaters’ Cuisine” the kind of food that looks and tastes as though you’ve spent ages cooking it, yet it is very simple to prepare, provided you cheat a little and you buy some ingredients ready cooked, processed or packaged. Here is a winter warmer, perfect for the weekend…

Let the chicken cool and remove the skin and bones. Take the meat and chop it in small bite-sized pieces in a casserole pot, shredding the stuffing over the meat. Add the mushrooms, corn (if you like it – I’m not very partial to it) and the cream. Dissolve the soup in some water and add it to the casserole. Season with the herbs, spices, salt and pepper. Stir well, cover the casserole and bake in a preheated oven at 180-200˚C for ≈30-45 minutes until well cooked.

Serve over boiled rice, cous cous or polenta. Sure it’s not lo-cal, but it’s winter and we need the energy!
Have a great weekend!
Posted by Intelliblog at 02:59 0 comments 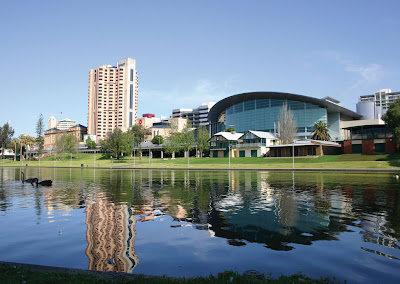 I am in Adelaide, South Australia today for work and it has been a good day full of negotiations, meetings and discussions, which all went well. Travelling for work can leave one a little drained, but I enjoy the fast pace and as I am a good flier and pack light, travel is quite satisfying for me. It pays to be organised and make every little bit of time count. One can then enjoy the business part of the trip and have some time available for some shopping, sightseeing or other personal time.

I always enjoy my trips to Adelaide as it is a gracious city, well planned and of a slightly slower pace than Melbourne or Brisbane. One of the great things about Adelaide is that the CBD is completely ringed by parks and gardens, effectively separating the centre of the city from the suburbs. There are wonderful 19th century public buildings and there are several beautiful beaches and sea-side suburbs, such as Glenelg, with a lively cosmopolitan feel to them. The suburbs are also attractive with the signature stone houses surrounded by gardens on tree-lined streets.

A delightful area is by the river where there are numerous parks and gardens as well as the Adelaide Performing Arts Centre. Adelaide is sometimes described as the City of Churches, but one does not often see this nowadays except in travel articles where the journalist writing it has used “Adelaide” too many times in the same paragraph…
Posted by Intelliblog at 21:02 0 comments 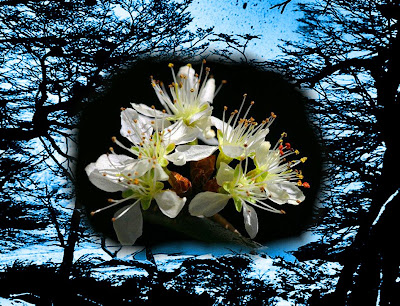 “It's time to renew our commitment to the world around us.” - Christopher Dodd

Well, I’m back with a new logic board and replaced firmware that had somehow got fried in my computer. This is the first serious hardware malfunction that I have had with my computer and considering it’s over 30 years that I have been using computers, I am considering myself very lucky. The other piece of luck was that the data on my hard disk had not been affected in the least, so it’s back to business, as usual. The need to constantly back-up data on one’s computer was highlighted by this little episode and I was thinking of whether I had lost the previous three weeks or so of work on it. I think from now on, a regular back-up is in order.

Poetry Wednesday today is dedicated to new starts, renewals and regeneration. It was a glorious Spring day here in Melbourne, a promise of the season well ahead and a sunny reaffirmation of September’s approach, even if rain and cold is promised for tomorrow and the day after.

Even if Winter’s cold will burn the blades of grass,
The roots beneath the soil abide their time,
Their sleeping juices waiting for the call of Spring.
Grief and black melancholy may overtake us,
But if the heart still beats strong, there’s hope
And life will ease the sorrow.

Even if flesh is cut and blood is lost,
The living force within the tissue swells,
It heals, it scars, regenerates the damaged parts.
The cheap betrayals, all the petty squabbles,
Will wash over a generous soul that still believes
In human goodness, kindness, love.

Even if leafless twigs look dead, covered in snow,
The swelling buds throng with hidden, green energy
And the promised flowers await the beckoning of longer days.
Separation, long silences, lost intimacies and misunderstandings
Will all evaporate, as the renewed bonds are forged,
Now stronger than before.
Posted by Intelliblog at 01:28 0 comments