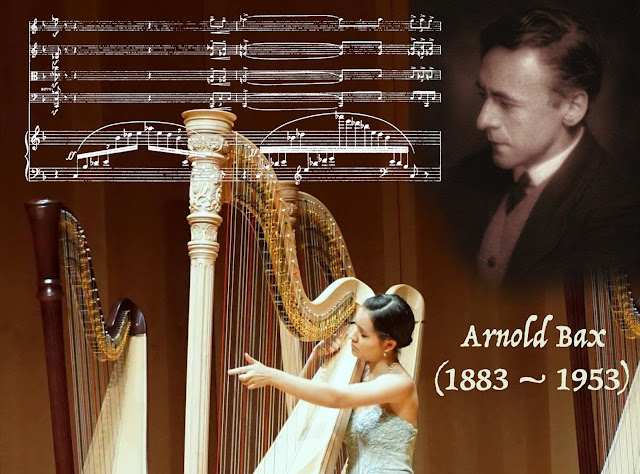 “And tears are heard within the harp I touch.” - Petrarch

Bax was born in the London suburb of Streatham to a prosperous family. He was encouraged by his parents to pursue a career in music, and his private income enabled him to follow his own path as a composer without regard for fashion or orthodoxy. Consequently, he came to be regarded in musical circles as an important but isolated figure. While still a student at the Royal Academy of Music Bax became fascinated with Ireland and Celtic culture, which became a strong influence on his early development. In the years before the First World War he lived in Ireland and became a member of Dublin literary circles, writing fiction and verse under the pseudonym Dermot O’Byrne.

Later, he developed an affinity with Nordic culture, which for a time superseded his Celtic influences in the years after the First World War. Between 1910 and 1920 Bax wrote a large amount of music, including the symphonic poem ‘Tintagel’, his best-known work. During this period he formed a lifelong association with the pianist Harriet Cohen – at first an affair, then a friendship, and always a close professional relationship. In the 1920s he began the series of seven symphonies, which form the heart of his orchestral output.

In 1942 Bax was appointed Master of the King’s Music, but composed little in that capacity. In his last years he found his music regarded as old-fashioned, and after his death it was generally neglected. From the 1960s onwards, mainly through a growing number of commercial recordings, his music was gradually rediscovered, although little of it is regularly heard in the concert hall.

Here is his ‘Quintet for harp and strings’ (1919). This is a single-movement work for harp and string quartet written at the time of his first visit to Ireland following the First World War. This visit led to Bax’s lifelong fascination with Ireland and Irish mythology. It is played by the Mobius Ensemble (Philippe Honoré, Maya Iwabuchi [violins], Vicci Wardman [viola], Sally Pendlebury [cello], Alison Nicholls harp]).
Posted by Intelliblog at 18:00 0 comments 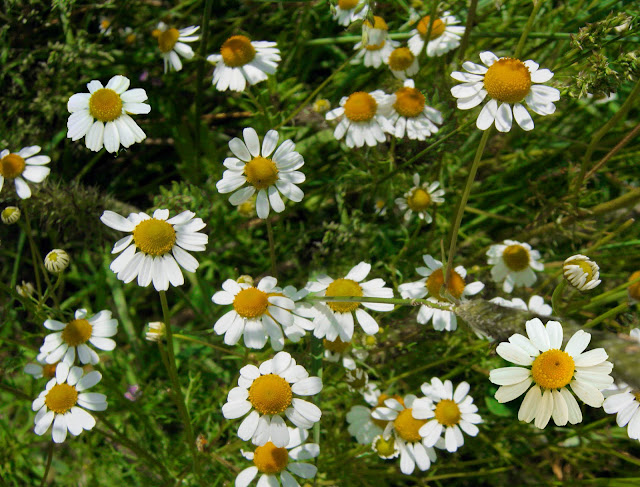 “How the Doctor’s brow should smile, crown’d with wreaths of camomile.” - Thomas Moore

The word ‘chamomile’ derives, via French and Latin, from Greek χαμαίμηλον (khamaimēlon), i.e. ‘earth apple’, from χαμαί (khamai) ‘on the ground’ and μῆλον (mēlon) ‘apple’. The more common British spelling ‘camomile’, is the older one in English, while the spelling ‘chamomile’ corresponds to the Latin and Greek source.

Matricaria chamomilla (synonym: Matricaria recutita), is the so-called German chamomile, which is most commonly used in herbal tisanes and is an annual plant with the familiar daisy-like flowers and feathery leaves. Chamaemelum nobile commonly known as Roman chamomile, is a low perennial plant found in dry fields and around gardens and cultivated grounds in Europe, North America, and in Argentina. C. nobile is, along with Matricaria chamomilla, an important source of the herbal product known as ‘chamomile’.

Chamomile tisane is a herbal infusion made from dried chamomile flowers and hot water, though does not contain black, green, yellow or white tea (Camellia sinensis). Either German chamomile or Roman chamomile dried flowers may be used to make the tisane, or sometimes a mixture of both.

A wide variety of chemical compounds derived from both types of chamomile have been isolated and studied. They possess significant pharmacological actions, including antispasmodic, antidiarrhoeal, anti-inflammatory, antineoplastic, anticoagulant and anxiolytic effects. This may explain the traditional uses of chamomile in herbal medicine for treatment of inflammation associated with haemorrhoids when topically applied. There is level B evidence that German chamomile possesses anti-anxiety properties and could be used to treat stress and insomnia.

Chamomile is frequently added to skin cosmetics to serve as an emollient, and for its anti-inflammatory effects. Chamomile is also often used to enhance the colour of blonde hair and is used as a rinser after shampooing to this effect. German chamomile oil is used as a diffuser for aromatherapy benefits; and is also used to treat wounds and be blended with other essential oils such as lavender and rose.

People who are allergic to ragweed (also in the daisy family) may also be allergic to chamomile, due to cross-reactivity. However, there is still some debate as to whether people with reported allergies to chamomile were actually exposed to chamomile and not a plant of similar appearance. It is also important to realise that use of chamomile and its products medicinally may interact adversely with several pharmacological drugs that the patient may be also using. Also, because chamomile has been known to cause uterine contractions that can invoke miscarriage, the U.S. National Institutes of Health recommends that pregnant and nursing mothers not consume Roman chamomile (Chamaemelum nobile). A doctor can provide suitable advice.

In the language of flowers, German chamomile means: “Have patience and find sources of energy in your adversity”. A sprig of Roman chamomile implies: “Take heart and find resources to support your enterprise”.
Posted by Intelliblog at 19:52 0 comments