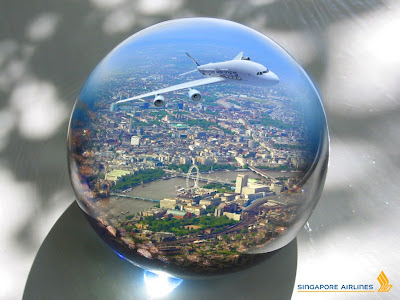 "Travelling is almost like talking with men of other centuries." -- René Descartes

This is the beginning of our travels for this year. Presently sitting in one of the lounges at Singapore Airport, which is I think one of the best in the world. It is a very relaxing atmosphere and one gets a chance to do all sorts of things and not even have to go near one of the duty free shops. Duty free is rather a misnomer nowadays as the goods there are seldom any cheaper than may find in a good department store at home. Still, it is surprising to see how many people are buying, buying, buying all over the place.

Airports are interesting places and it is always revealing just sitting and watching the people go by. Thousands of faces and each with its own story. Some travel for pleasure, some for work, some for family, some because of special reasons for all kinds. Some faces happy, some sad, some apathetic, many showing the fatigue of travel.

Our flight from Melbourne was uneventful, although the service on board is steadily declining with each trip one makes. However, the plane was absolutely full and one puts up with the inconvenience of the long flight because of the destination and all it promises…
Posted by Intelliblog at 04:28 2 comments 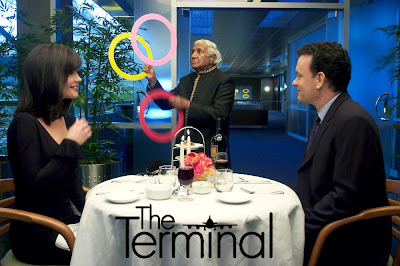 “If we were to wake up some morning and find that everyone was the same race, creed and color, we would find some other cause for prejudice by noon.” - George Aiken

We are about to go off on our trip to Greece again this year (leaving tomorrow, in fact), so it is apt to review a wonderful film about airports today. We watched this yesterday and it is one of the most touching and heartwarming movies we’ve watched lately. It is Steven Spielberg’s 2004 film “The Terminal” with Tom Hanks. It is a comedy/drama with moments of pure comedic invention, sequences of pathos and emotion, romance and moral equivocation.

Tom Hanks play Viktor Navorski, an Eastern European from the fictitious country of Krakozhia, who is visiting New York City on a special mission (watch that special can of peanuts he has with him). During his arrival at Kennedy Airport, his country is overtaken by a military coup and all passports are suspended. Navorski becomes stranded in the airport terminal, unable to go back to Krakozhia, but also unable to enter the USA.

The film traces his months of residency inside the terminal building, his burgeoning friendships with staff, his struggle for survival as he learns English and his patient forbearance in adversity. In the terminal, he finds a job, meets his dream woman but also makes some enemies in high places. It is a microcosm that reflects society and also is a statement about our prejudices and our way of looking at people with suspicion when they are different from us. We question their motives, suspect hidden agendas and we are prepared to do our utmost to frustrate their supposed nefarious activities.

The film criticizes contemporary American society to the extent of making a statement about the USA and how it may not be as desirable a destination for everyone who reaches its shores and makes (for an American film) the almost heretical point that perhaps there are other better countries around the world that you would prefer to live in. The part of the film where Viktor is being advised to demand political asylum is quite poignant…

The acting was very good, with Hanks giving a great performance. Some of the supporting roles were excellent and Catherine Zeta-Jones playing the fragile flight attendant was well cast. Stanley Tucci played the villain very well and a particularly nice touch was Kumar Pallana playing the suspicious cleaner with the mean streak.

It’s a sentimental, understated, enjoyable character study, which despite is length (just over two hours) manages to captivate the viewers and holds their attention. Well worth watching!
Posted by Intelliblog at 01:48 0 comments 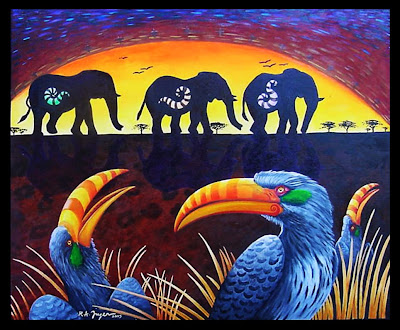 The painting above is by Roy Astley Fryer of South Africa and encapsulates the spirit of the great continent.
Posted by Intelliblog at 02:54 0 comments