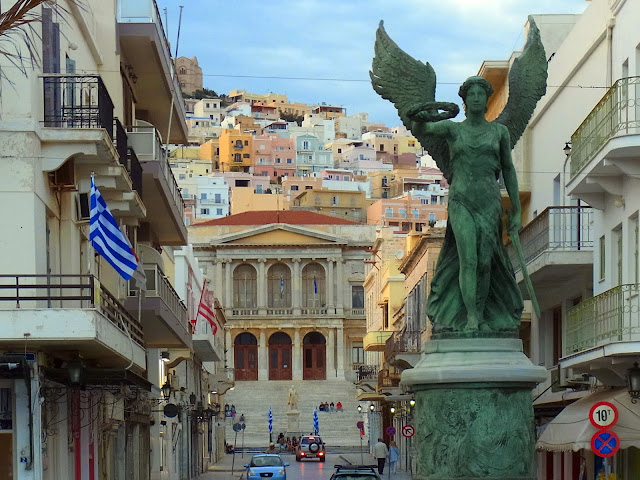 “The centre of Western culture is Greece, and we have never lost our ties with the architectural concepts of that ancient civilisation.” - Stephen Gardiner

Ermoupoli (Greek: Ερμούπολη), also known by the formal older name Ermoupolis or Hermoupolis (Greek: Ἑρμούπολις < Ἑρμοῦ πόλις “Town of Hermes”), is a town and former municipality on the island of Syros, in the Cyclades, Greece. Since the 2011 local government reform, it is part of the municipality Syros-Ermoupoli, of which it is the seat and a municipal unit. It is also the capital of the South Aegean region. The municipal unit has an area of 11.181 km2.

Ermoupoli was founded during the Greek Revolution in the 1820s, as an extension to the existing Ano Syros township, by war refugees from other Greek islands. It soon became the leading commercial and industrial centre of Greece, as well as its main port. The renowned Greek Steamship Company was founded in the city in 1856. Thousands of ships were built in the various Syros shipyards. Eventually Ermoupoli was eclipsed by Piraeus in the late 19th century. In the following decades the city declined. Recently, its economy has greatly improved, based on the service industry.

Ermoupoli is sited on a naturally amphitheatrical site, with neo-classical buildings, old mansions and traditional island houses cascading down to the harbour. The City Hall, on Miaoulis Square is ringed by cafes and seating areas under palm trees. The “City of Hermes” has numerous churches, including Metamorphosis, Koimisis, St. Demetrius, Three Hierarchs, Anastasis, Evangelistria and St. Nicholas. The Archaeological Museum has many significant exhibits and the Municipal Library contains numerous books, including some rare editions. The quarter of the town known as Vaporia is where the sea captains lived. Along its narrow streets, stand many neo-classical mansions of rich and significant architecture.

Ano Syros is the second town of Syros and was built by the Venetians at the beginning of the 13th century on the hill of San Giorgio, north-west of Ermoupoli. Ano Syros maintains a medieval atmosphere. Innumerable steps between narrow streets and houses with brightly coloured doors lead to the top of the town. The medieval settlement of Ano Syros is accessible by car, although the town is served mostly by marble steps. The distance from the harbour up to the main entry point of the town is approximately 1000 metres. The Catholic cathedral of Saint George dominates Ano Syros. The cathedral church was constructed during the 13th century. From the cathedral visitors have a panoramic view of the neighbouring islands of Tinos, Delos, Mykonos, Paros, Andros and Naxos.

This post is part of the Our World Tuesday meme,
and also part of the Wordless Wednesday meme.
Posted by Intelliblog at 03:46 6 comments