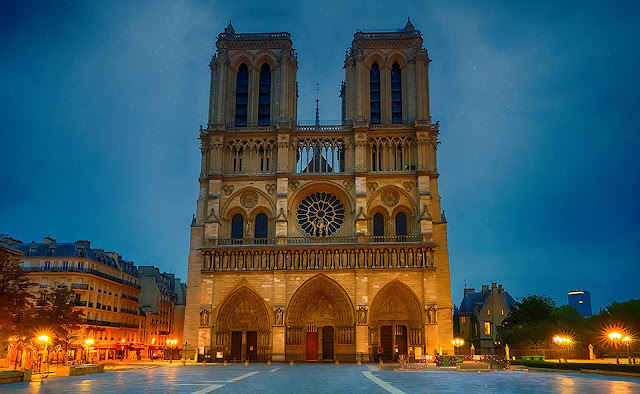 “I beg you take courage; the brave soul can mend even disaster.” - Catherine the Great

Paris is the capital and most populous city of France. It has an area of 105 square kilometres and a population of 2,229,621 in 2013 within its administrative limits The city is both a commune and department and forms the centre and headquarters of the Île-de-France, or Paris Region, which has an area of 12,012 square kilometres and a population in 2016 of 12,142,802, comprising roughly 18 percent of the population of France. By the 17th century, Paris was one of Europe's major centres of finance, commerce, fashion, science, and the arts, and it retains that position still today. The Paris Region had a GDP of €624 billion (US $687 billion) in 2012, accounting for 30.0 percent of the GDP of France and ranking it as one of the wealthiest regions in Europe.

Notre-Dame de Paris ("Our Lady of Paris"), also known as Notre-Dame Cathedral or simply Notre-Dame, is a medieval Catholic cathedral on the Île de la Cité in the fourth arrondissement of Paris, France. The cathedral is widely considered to be one of the finest examples of French Gothic architecture, and it is among the largest and most well-known church buildings in the world. The naturalism of its sculptures and stained glass are in contrast with earlier Romanesque architecture. As the cathedral of the Archdiocese of Paris, Notre-Dame contains the cathedra of the Archbishop of Paris, currently Cardinal Michel Christian Alain Aupetit.

The cathedral treasury contains a reliquary, which houses some of Catholicism's most important relics, including the purported Crown of Thorns, a fragment of the True Cross, and one of the Holy Nails. In the 1790s, Notre-Dame suffered desecration in the radical phase of the French Revolution when much of its religious imagery was damaged or destroyed. An extensive restoration supervised by Eugène Viollet-le-Duc began in 1845. A project of further restoration and maintenance began in 1991.

While undergoing renovation and restoration, the cathedral caught fire on 15 April 2019 and sustained significant damage, including the destruction of two-thirds of the roof and the spire. The world watched in disbelief as this cultural monument of humankind was devastated by flames. All cultured human beings mourned with the French for the loss of this basion of Western civilisation. French President Emmanuel Macron announced that Notre-Dame will be rebuilt, stating “It’s part of the fate, the destiny of France, and our common project over the coming years. And I am committed to it.”

We stand united with Parisians and all civilised people around the world, sharing their loss of one of the great cultural monuments of the world, the Nôtre Dame of Paris. The cathedral will arise anew from its ashes and continue to symbolise culture and civilisation, faith and enlightenment, sensitivity and broad-mindedness.

You are invited to the Inlinkz link party!
Click here to enter
Posted by Intelliblog at 02:05 9 comments