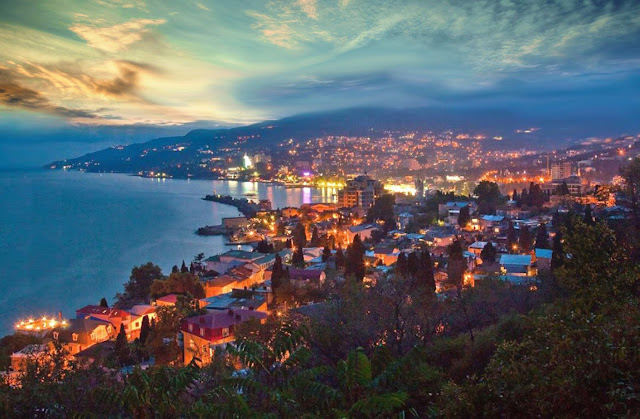 “... those Yalta nights, with extraordinary women who could drink vodka without swooning until six in the morning and sweaty young people from the Association of Proletarian Writers of Crimea who came to ask for literary advice at four in the afternoon.” ― Roberto Bolaño

Yalta (Russian: Я́лта) is a resort city on the south coast of the Crimean Peninsula surrounded by the Black Sea. It serves as the administrative centre of Yalta Municipality, one of the regions within Crimea. Population: 76,746 (2014 Census). The city is located on the site of an ancient Greek colony, said to have been founded by the Greek conquerors who were looking for a safe shore (γιαλός – yalos in Greek) on which to land.

Yalta is situated on a deep bay facing south towards the Black Sea, surrounded by the mountain range Ai-Petri. It has a warm humid subtropical climate and surrounded by numerous vineyards and orchards. The term "Greater Yalta" is used to designate a part of the Crimean southern coast spanning from Foros in the west to Gurzuf in the east and including the city of Yalta and multiple adjacent urban settlements.