IF MUSIC BE THE FOOD OF LOVE... 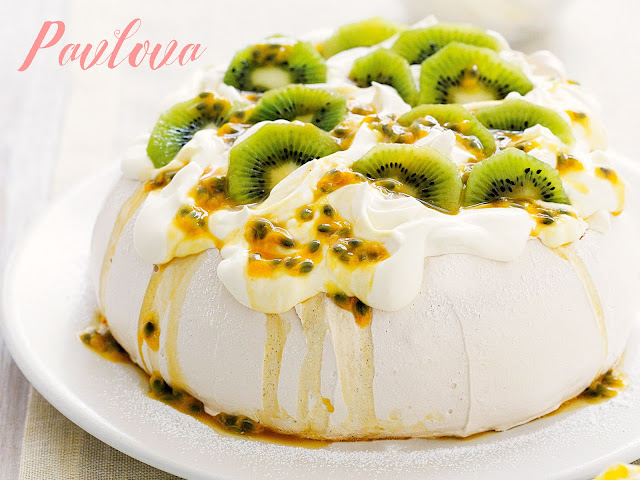 Then dance must be its sweet dessert...


“The silver swan, who, living had no note, When death approached unlocked her silent throat.” - Orlando Gibbons

Pavlova is a meringue-based dessert named after the Russian ballerina Anna Pavlova (February 12 1881 – January 23, 1931). It is a meringue dessert with a crisp crust and soft, light inside, usually topped with fruit and whipped cream. The dessert is believed to have been created in honour of the dancer either during or after one of her tours to Australia and New Zealand in the 1920s. The nationality of its creator has been a source of argument between the two nations for many years.

In 2008, Helen Leach published “The Pavlova Story: A Slice of New Zealand’s Culinary History”, in which she argued that the earliest known recipe was published in New Zealand. Later research by Andrew Wood and Annabelle Utrecht suggested the dessert originated in the United States and was based on an earlier German dish. The dessert is a popular dish and an important part of the national cuisine of both Australia and New Zealand, and with its simple recipe, is frequently served during celebratory and holiday meals.

It is a dessert most identified with the summer time and popularly eaten during that period including at Christmas time, however it is also eaten all year round in many Australian and New Zealand homes.

Here is a recipe for Pavlova:

Method
Preheat oven to 120°C. Line an oven tray with foil. Brush with melted butter and dust with cornflour, shaking off excess. Mark a 24cm-diameter circle on foil.
Use an electric mixer to whisk egg whites in a clean dry bowl until soft peaks form. Gradually add sugar, 1 tablespoon at a time, beating well after each addition, until meringue is thick and glossy and sugar dissolved. Rub a little meringue between fingers. If still "gritty" with sugar, continue to whisk until sugar dissolves. Add cornflour, vinegar and vanilla and whisk until just combined.
Spoon meringue onto the foil, using the marked circle as a guide. Smooth sides and top of pavlova. Use a small spatula to forms little peaks around edge of pavlova. Bake in oven for 11/2 hours or until pavlova is dry to the touch. Turn off oven. Leave pavlova in oven with the door ajar to cool completely. When completely cold, transfer to serving plate or store in an airtight container until required.
Boil the water in a cup in a microwave and dissolve the gelatin in it, adding the passionfruit pulp. Let this cool until it is just beginning to set.
Meanwhile, use an electric mixer to whisk the cream and icing sugar in a medium bowl until firm peaks form. Spoon cream onto the top of pavlova. Pour the passionfruit jelly mixture on top and decorate pavlova with fruit.

And here is Anna Pavlova dancing the Dying Swan to music by Camille Saint Saëns.

Posted by Intelliblog at 18:05 0 comments 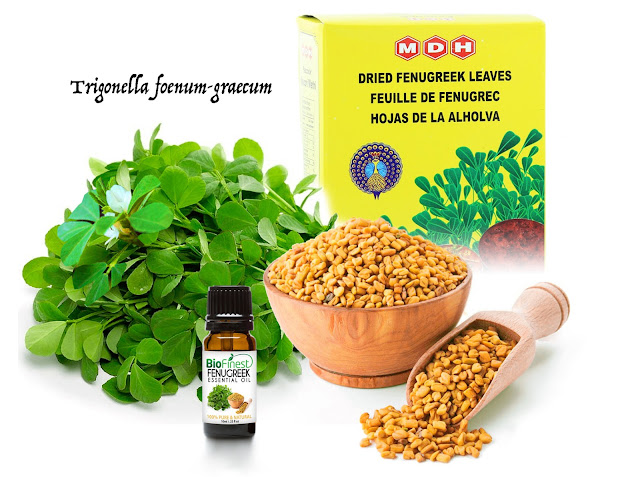 “I grow my own vegetables and herbs. I like being able to tell people that the lunch I'm serving started out as a seed in my yard.” - Curtis Stone

Fenugreek (Trigonella foenum-graecum) is an annual plant in the family Fabaceae, with leaves consisting of three small obovate to oblong leaflets. It is cultivated worldwide as a semiarid crop. Its seeds and its leaves are common ingredients in dishes from South Asia. The English name derives via Middle French fenugrec from Latin faenugraecum, faenum Graecum meaning “Greek hay”.

Fenugreek is believed to have been brought into cultivation in the Near East. Charred fenugreek seeds have been recovered from Tell Halal, Iraq, (carbon dated to 4000 BC) and Bronze Age levels of Lachish and desiccated seeds from the tomb of Tutankhamen. Cato the Elder lists fenugreek with clover and vetch as crops grown to feed cattle. In one first-century A.D. recipe, the Romans flavoured wine with fenugreek. In the 1st century AD, in Galilee, it was grown as a food staple, as Josephus mentions it in his book, the Wars of the Jews. A compendium of Jewish oral law known as the Mishnah (compiled in the 2nd century) mentions the plant under its Hebrew name, tiltan.

Fenugreek is used as a herb (dried or fresh leaves), spice (seeds), and vegetable (fresh leaves, sprouts, and microgreens). Sotolon is the chemical responsible for fenugreek’s distinctive sweet smell. Cuboid-shaped, yellow- to amber-coloured fenugreek seeds are frequently encountered in the cuisines of the Indian subcontinent, used both whole and powdered in the preparation of pickles, vegetable dishes, dal, and spice mixes such as panch phoron and sambar powder. They are often roasted to reduce bitterness and enhance flavour.

Fresh fenugreek leaves are an ingredient in some Indian curries. Sprouted seeds and microgreens are used in salads. When harvested as microgreens, fenugreek is known as samudra methi in Maharashtra, especially in and around Mumbai, where it is often grown in sandy tracts near the sea, hence the name samudra, “ocean” in Sanskrit. Samudra methi is also grown in dry river beds in the Gangetic plains. When sold as a vegetable in India, the young plants are harvested with their roots still attached and sold in small bundles in the markets and bazaars. Any remaining soil is washed off to extend their shelf life.

In Turkish cuisine, fenugreek seeds are used for making a paste known as çemen. Cumin, black pepper, and other spices are added into it, especially to make pastırma. In Persian cuisine, fenugreek leaves are called shanbalile. They are the key ingredient and one of several greens incorporated into ghormeh sabzi and eshkeneh, often said to be the Iranian national dishes. In Egyptian cuisine, peasants in Upper Egypt add fenugreek seeds and maize to their pita bread to produce aish merahrah, a staple of their diet.

Fenugreek is used in Eritrean and Ethiopian cuisine. The word for fenugreek in Amharic is abesh, and the seed is used in Ethiopia as a natural herbal medicine in the treatment of diabetes. Yemenite Jews following the interpretation of Rabbi Shelomo Yitzchak (Rashi) believe fenugreek (which they call hilbeh, hilba, helba, or halba) to be the Talmudic rubia.  When the seed kernels are ground and mixed with water they greatly expand; hot spices, turmeric and lemon juice are added to produce a frothy relish eaten with a sop. The relish is also called hilbeh; it is reminiscent of curry. It is eaten daily and ceremonially during the meal of the first and/or second night of the Jewish New Year, Rosh Hashana.
Posted by Intelliblog at 19:39 0 comments 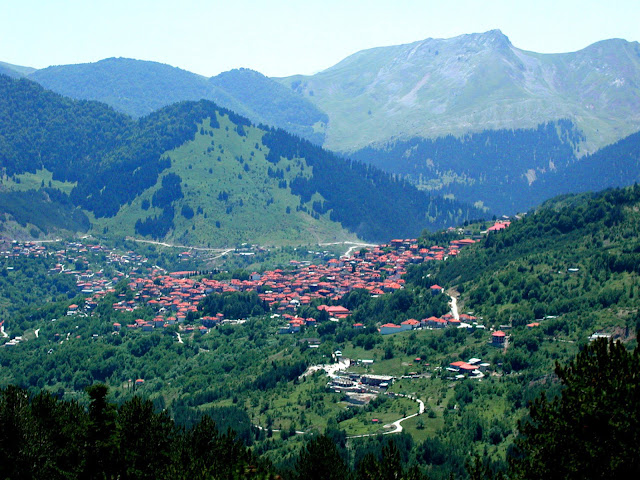 “I believe in traditions; I believe in the idea of things being passed between generations and the slow transmission of cultural values through tradition.” - Graham Moore

Metsovo is a town in Epirus on the mountains of Pindus in northern Greece, between Ioannina to the north and Metéora to the south. The largest centre of Vlach life in Greece, Metsovo is served by GR-6 Roadway and also by Egnatia Odos Motorway. This one of the most picturesque towns in Greece, its traditional stone houses nestling on the steep mountainside. It is the largest Vlach town in Greece and one can her the Vlach language spoken here as well as Greek.

Metsovo is found at 1200 m altitude in an impressive verdant landscape, on the spot that North and South Pindos Mountains separate. Despite the radical growth of tourism in the latest years, the area has not lost its traditional character. It harmoniously combines the past with the present and it is an ideal shelter not only in winter when you will probably see it in snow and enjoy winter sports, but it has much to offer during all of the seasons of the year.

Being the birthplace of some of some of the most important Greek National Benefactors, Metsovo could not but be famous for its great cultural development. You will admire its museums, the mansions made of stone, the monasteries, the twenty traditional fountains and the cobbled streets. You may also have the chance to attend one of the many cultural events that are organised in the well-appointed conference centre. In addition, you can walk around and enjoy your meal, coffee or snacks in the central square that is surrounded by restaurants and pretty cafés.

More than 200 paintings and sculptures by the great Greek artists of the 19th and 20th century are exhibited in the Averoff Gallery, the most significant cultural space in Epirus. Lytras, Gyzis, Volanakis, Parthenis, Hatzikiriakos-Gikas, Tsarouhis, Moralis, Fasianos, are just a few of the famous artists with works in the collection, housed in a spectacular building with three floors behind the town’s main square.

Finally, there are several areas around Metsovo, each of which has something special to offer. You can visit Anthochori, which has an open air museum of water-driven machinery, Chrisovitsa with Panagia Monastery and its famous potatoes, the villages Anilio and Votonosi, as well as the traditional settlement of Milia on the borders of the National Forest.