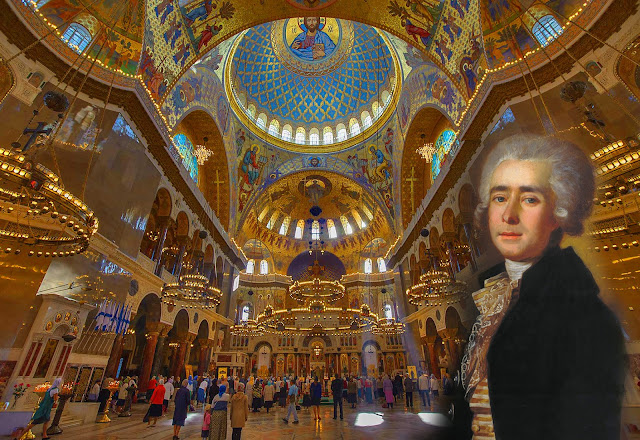 “Prayer does not change God, but it changes him who prays.” - Søren Kierkegaard

Dmytro Stepanovych Bortniansky (Ukrainian: Дмитрiй Степанович Бортнянський) or Dmitry Stepanovych Bortniansky (Russian: Дмитрий Степанович Бортнянский; 28 October 1751–10 October [O.S. 28 September] 1825) was a Russian composer and conductor of Ukrainian origin. Bortniansky is best known today for his liturgical works and his prolific contributions to the genre of choral concertos. He was one of the “Golden Three” of his era, along with Artem Vedel and Maksym Berezovsky. Bortniansky composed in many different musical styles, including choral compositions in French, Italian, Latin, German and Church Slavonic.

Bortniansky was born on 28 October 1751 in the city of Glukhov (in present-day Ukraine), then a part of the autonomous Cossack Hetmanate within the Russian Empire, into the family of Stefan Skurat (or Shkurat), a Lemko-Rusyn Orthodox religious refugee from the village of Bortne in the Malopolska region (he was entered in the Cossack register at Glukhov in 1755). At the age of seven, Dmytro’s prodigious talent at the local church choir afforded him the opportunity to go the capital of the empire and sing with the Imperial Chapel Choir in St. Petersburg. There he studied music and composition under the director of the Imperial Chapel Choir, the Italian master Baldassare Galuppi. When Galuppi left for Italy in 1769, he took the boy with him. In Italy, Bortniansky gained considerable success composing operas: ‘Creonte’ (1776) and ‘Alcide’ (1778) in Venice, and ‘Quinto Fabio’ (1779) at Modena. He also composed sacred works in Latin and German, both a cappella and with orchestral accompaniment (including an Ave Maria for two voices and orchestra).

Bortniansky returned to the Saint Petersburg Court Capella in 1779 and flourished creatively. He composed at least four more operas (all in French, with libretti by Franz-Hermann Lafermière): ‘Le Faucon’ (1786), ‘La fête du seigneur’ (1786), ‘Don Carlos’ (1786), and ‘Le fils-rival’ ou ‘La moderne Stratonice’ (1787). Bortniansky wrote a number of instrumental works at this time, including piano sonatas and a piano quintet with harp, and a cycle of French songs. He also composed liturgical music for the Orthodox Church, combining the Eastern and Western European styles of sacred music, incorporating the polyphony he learned in Italy; some works were polychoral, using a style descended from the Venetian polychoral technique of the Gabrielis.

After a while, Bortniansky's genius proved too great to ignore, and in 1796 he was appointed Director of the Imperial Chapel Choir, the first director not to have been imported from outside of the Russian Empire. With such a great instrument at his disposal, he produced scores upon scores of compositions, including over 100 religious works, sacred concertos (35 for four-part mixed choir, 10 for double choruses), cantatas, and hymns. Dmytro Bortniansky died in St. Petersburg on 10 October 1825, and was interred at the Smolensky Cemetery in St. Petersburg. His remains were transferred to the Alexander Nevsky Monastery in the 20th century.

In 1882, Tchaikovsky edited the liturgical works of Bortniansky, which were published in ten volumes. While Bortniansky wrote operas and instrumental compositions, it is his sacred choral works that are performed most often today. This vast body of work remains central not only to understanding 18th-century Orthodox sacred music, but also served as inspiration to his fellow Ukrainian composers in the 19th century. The tune he wrote for the Latin hymn ‘Tantum Ergo’ eventually became known in Slavic lands as Коль славен (Kol slaven), in which form it is still sung as a church hymn today.

The tune was also popular with freemasons. It travelled to English-speaking countries and came to be known by the names Russia, St. Petersburg or Wells. In Germany, the song was paired with a text by Gerhard Tersteegen, and became a well-known chorale and traditional part of the military ceremony Großer Zapfenstreich (the Grand Tattoo), the highest ceremonial act of the German army, rendered as an honour for distinguished persons on special occasions. Prior to the October revolution in 1917, the tune was played by the Moscow Kremlin carillon every day at midday. James Blish, who novelized many episodes of the original series of Star Trek, noted in one story, Whom Gods Destroy, that Bortniansky’s ‘Ich bete an die Macht der Liebe’ was the theme “to which all Starfleet Academy classes marched to their graduation.” Bortniansky also composed “The Angel Greeted the Gracious One” (hymn to the Mother of God used at Pascha) as a trio used by many Orthodox churches in the Easter season.

Here are some of his Choral Concertos (Sacred Concertos No. 24-29), with the Russian State Symphonic Cappella conducted by Valeri Polyansky, recorded in the Dormition Cathedral of Smolensk and St Sophia’s Cathedral, Polotsk 1989-90.

Posted by Intelliblog at 10:56 0 comments 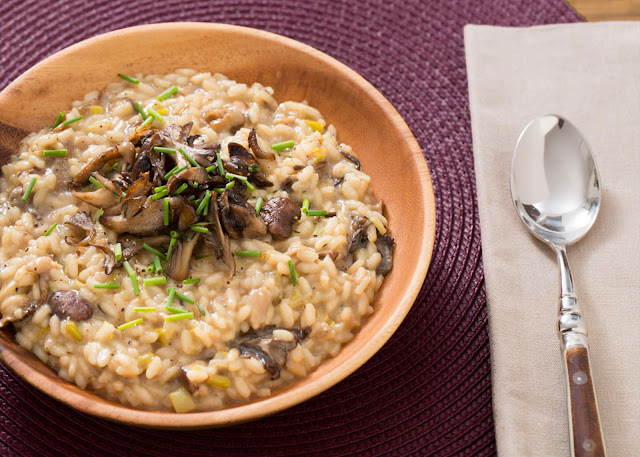 Rice is an important food crop and is grown and harvested on every continent except Antarctica, where conditions make its growth impossible (not much is grown as a crop in Antarctica!). The majority of all rice produced comes from India, China, Japan, Indonesia, Thailand, Burma, and Bangladesh. Asian farmers still account for 92% of the world's total rice production. Talking with a Chinese colleague, I was told that rice in Asian countries is viewed very much as bread is viewed by the European. Just as in the Southern Mediterranean countries bread was the basis of every meal, in Asian countries boiled or steamed rice is the basis of every meal.

Rice and its by-products are used for making straw and rope, paper, wine, crackers, beer, cosmetics, packing material, and even toothpaste! Now for that risotto recipe. Risotto is a classic dish of Italy prepared with special varieties of rice rich in starch, especially the Arborio type, and there are a multitude of recipes and variations. They all have as common feature the toasting of the rice with butter or olive oil, before broth is added to cook the grains thoroughly.

Method
Put the butter and two tbsp of the oil in a frying pan over medium-high heat. Add mushrooms and cook for about 5 minutes. Add the wine, bring to a boil, and reduce liquid by half, about 3-4 minutes. Lower heat to medium, add cream, and simmer 5 minutes. Remove skillet from heat and set aside.
Boil the stock and then reduce to a simmer in a saucepan.
In another deep, heavy, saucepan, heat the second lot of oil and butter. Add the onions and cook until soft. Add the rice and ground mace, and stir to coat with butter and oil, toasting for two to three minutes. Add the simmering stock, stirring to keep the rice from sticking to the edges of the pan. The stock should be almost completely absorbed in about 20 minutes. The rice should be cooked and creamy, but still in separate grains.
Stir in the mushroom mixture and the Parmesan cheese. Season to taste with salt and pepper and garnish with parsley if desired.
Posted by Intelliblog at 19:44 0 comments 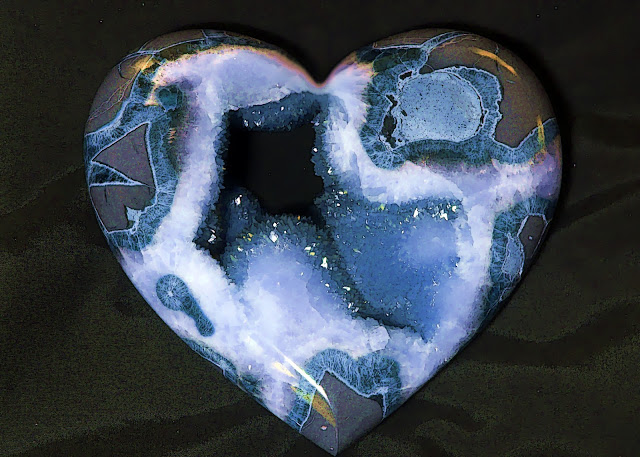 “Keep love in your heart. A life without it is like a sunless garden when the flowers are dead.” – Oscar Wilde

I have been very busy working hard these past few weeks and hence have had little spare time that has to be apportioned very sparingly according to a strict set of priorities. Nevertheless, late at night behind the closed door of my study, when I can shut everyone and everything out, I allow myself a little latitude and I can take some time to be creative.

Here is a poem just written for the Poets United Midweek Motif challenge, which this week is all about “Space”.

There is a space in my heart: To Let –
Ever since you left,
A huge, echoing space the size of the universe
All enclosed in that small, fist-sized organ
Of shuddering flesh,
That is my empty heart.

There is a space in my heart: To Let –
Ever since you left,
I have been walking in there endlessly
And my footsteps echo hollow,
Each step taking great effort,
Each step leaving behind great pain.

There is a space in my heart: To Let –
It is very clean,
And quiet; warm in Winter, cool in Summer,
Of Northerly aspect – and the best of all,
It has a garden with great potential –
A little care will make it bloom.

There is a space in my heart: To Let –
Going cheaply –
In fact no money need change hands –
All that I need to fill it is sincerity,
Some affection, tenderness, understanding.
Love may enter as a sub-letter later.
Posted by Intelliblog at 01:53 16 comments 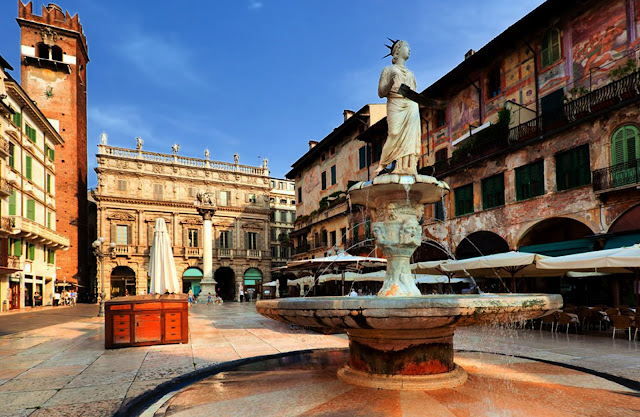 “Wisely and slow; they stumble that run fast.” ― William Shakespeare

Verona is a city on the Adige river in Veneto, northern Italy, with approximately 265,000 inhabitants and one of the seven provincial capitals of the region. It is the second largest city municipality in the region and the third largest in northeast Italy. The metropolitan area of Verona covers an area of 1,426 km2 and has a population of 714,274 inhabitants.

It is one of the main tourist destinations in northern Italy, owing to its artistic heritage, several annual fairs, shows, and operas, such as the lyrical season in the Arena, the ancient amphitheatre built by the Romans, which is well preserved and forms a centrepiece for city life.

Three of Shakespeare's plays are set in Verona: 'Romeo and Juliet', 'The Two Gentlemen of Verona', and 'The Taming of the Shrew'. It is unknown if Shakespeare ever visited Verona or Italy at all, but his plays have lured many visitors to Verona and surrounding cities many times over. The city has been awarded World Heritage Site status by UNESCO because of its urban structure and architecture. The photo above is taken at the Piazza delle Erbe.

This post is part of the Our World Tuesday meme.

Posted by Intelliblog at 00:55 3 comments