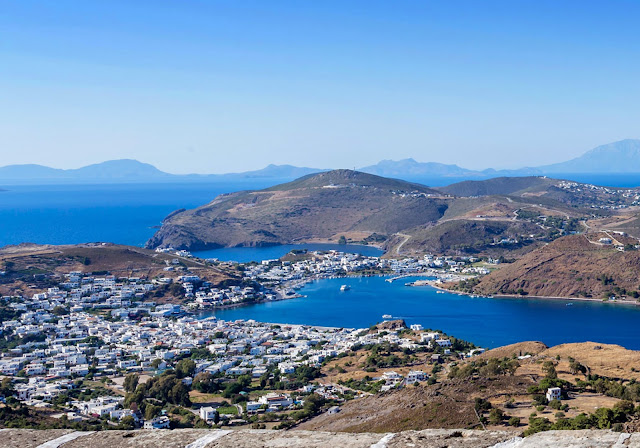 “Do you wish to see clearly? First  shed your tears so that your heart is cleansed; then open your eyes wide, and unstop your ears. Extend your hands and offer to anyone in need whatever you have and can hardly spare. The world in all its beauty will reveal itself to you in its crystal clarity.” - NJV

Patmos (Greek, Πάτμος; Italian: Patmo) is a small Greek island in the Aegean Sea. One of the northernmost islands of the Dodecanese complex, it has a population of 2,998 and an area of 34.05 km2. The highest point is Profitis Ilias, 269 metres above sea level. The Municipality of Patmos, which includes the offshore islands of Arkoi (pop. 44), Marathos (pop. 5), and several uninhabited islets, has a total population of 3,047 (2011 census) and a combined land area of 45.039 square kilometres.

Forbes in a 2009 research has named Patmos as Europe's Most Idyllic Place to live, due to the fact that: “Patmos has evolved over the centuries but has not lost its air of quiet tranquillity, which is one reason why people that know it return again and again.”

Patmos is mentioned in the Book of Revelation, the last book of the Christian Bible. The book’s introduction states that its author, John, was on Patmos when he was given (and recorded) a vision from Jesus. Early Christian tradition identified this writer John of Patmos as John the Apostle. For this reason, Patmos is a destination for Christian pilgrimage.

Visitors can see the cave where John is said to have received his Revelation (the Cave of the Apocalypse), and several monasteries on the island are dedicated to Saint John. After the death of John of Patmos, possibly around 100, a number of Early Christian basilicas were erected on Patmos. Among these was a Grand Royal Basilica in honour of Saint John, built c. 300–350 at the location where the Monastery of Saint John the Theologian stands today.

Click here to enter
Posted by Intelliblog at 02:10 6 comments