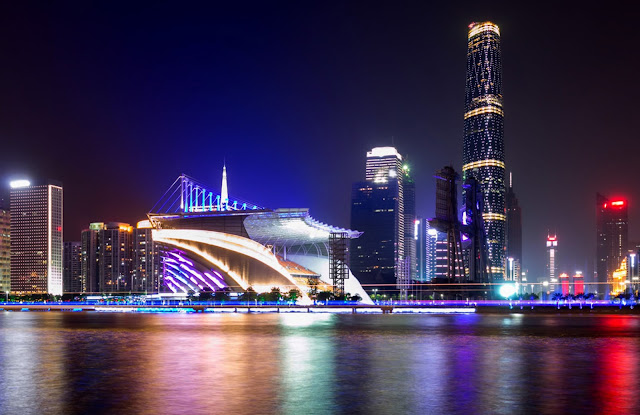 “I'll love you, dear, I'll love you till China and Africa meet and the river jumps over the mountain and the salmon sing in the street.” - W. H. Auden

Guangzhou (simplified Chinese: 广州; traditional Chinese: 廣州), traditionally romanised as Canton, is the capital and most populous city of the province of Guangdong in southern China. Located on the Pearl River about 120 km north-northwest of Hong Kong and 145 km north of Macau, Guangzhou has a history of over 2,200 years and was a major terminus of the maritime Silk Road and continues to serve as a major port and transportation hub today.

Guangzhou is situated at the heart of the most-populous built-up metropolitan area in mainland China, an area that extends into the neighbouring cities of Foshan, Dongguan, and Shenzhen, forming one of the largest urban agglomerations on the planet. Administratively, the city holds sub-provincial status; and is one of China's five National Central Cities. In 2015 the city's administrative area was estimated to have a population of 13,501,100. Guangzhou is ranked as an Alpha- Global city.

In recent years, there has been a rapidly increasing number of foreign residents and immigrants from Southeast Asia, the Middle East, Eastern Europe, and especially from Africa. This has led to it being dubbed the "Capital of the Third World". The migrant population from other provinces of China in Guangzhou was 40 percent of the city's total population in 2008. Together with Shanghai, Beijing and Shenzhen, Guangzhou has one of the most expensive real estate markets in China.

Guangzhou has a comparatively recent history of two centuries related to its importance for foreign trade. Long the only Chinese port accessible to foreign traders, the city fell to the British during the First Opium War. No longer enjoying a monopoly after the war, it lost trade to other ports such as Hong Kong (which is close by) and Shanghai, but continued to serve as a major entrepôt. In modern commerce, Guangzhou is best known for its annual Canton Fair, the oldest and largest trade fair in China. For the three consecutive years 2013–2015, Forbes ranked Guangzhou as the best commercial city on the Chinese mainland.

Click here to enter
Posted by Intelliblog at 01:06 5 comments