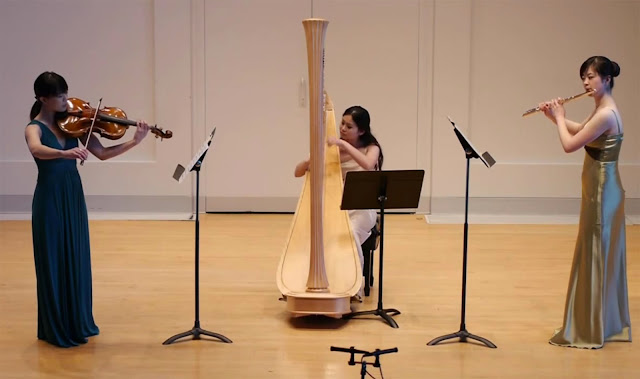 Bax was born in the London suburb of Streatham to a prosperous family. He was encouraged by his parents to pursue a career in music, and his private income enabled him to follow his own path as a composer without regard for fashion or orthodoxy. Consequently, he came to be regarded in musical circles as an important but isolated figure. While still a student at the Royal Academy of Music Bax became fascinated with Ireland and Celtic culture, which became a strong influence on his early development. In the years before the First World War he lived in Ireland and became a member of Dublin literary circles, writing fiction and verse under the pseudonym Dermot O’Byrne. Later, he developed an affinity with Nordic culture, which for a time superseded his Celtic influences in the years after the First World War.

Between 1910 and 1920 Bax wrote a large amount of music, including the symphonic poem Tintagel, his best-known work. During this period he formed a lifelong association with the pianist Harriet Cohen – at first an affair, then a friendship, and always a close professional relationship. In the 1920s he began the series of seven symphonies, which form the heart of his orchestral output. In 1942 Bax was appointed Master of the King's Music, but composed little in that capacity. In his last years he found his music regarded as old-fashioned, and after his death it was generally neglected. From the 1960s onwards, mainly through a growing number of commercial recordings, his music was gradually rediscovered, although little of it is regularly heard in the concert hall.

Here is his “Elegiac Trio” played by the “Formosa Trio” (Viola - Tze-Ying Wu; Harp - Joy Yeh; Flute- Pei-San Chiu) in a performance on March 28, 2012, at the Ford-Crawford Hall, Indiana University Bloomington- Jacobs School of Music.
Posted by Intelliblog at 18:53 0 comments 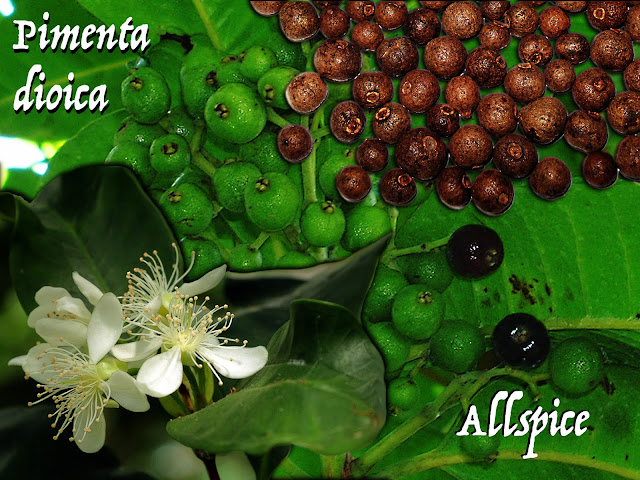 “Variety’s the very spice of life, That gives it all its flavour.” - William Cowper

Allspice is the dried fruit of the P. dioica plant. The fruits are picked when green and unripe and are traditionally dried in the sun. When dry, they are brown and resemble large, brown, smooth peppercorns. The whole fruits have a longer shelf life than the powdered product, and produce a more aromatic product when freshly ground before use.

Fresh leaves are used where available. They are similar in texture to bay leaves, thus are infused during cooking and then removed before serving. Unlike bay leaves, they lose much flavour when dried and stored, so are not available commercially. The leaves and wood are often used for smoking meats where allspice is a local crop. Allspice can also be found in essential oil form.

Allspice is one of the most important ingredients of Caribbean cuisine. It is used in Caribbean jerk seasoning (the wood is used to smoke jerk in Jamaica, although the spice is a good substitute), in moles, and in pickling; it is also an ingredient in commercial sausage preparations and curry powders. Allspice is also indispensable in Middle Eastern cuisine, particularly in the Levant, where it is used to flavour a variety of stews and meat dishes. In Arab cuisine, for example, many main dishes call for allspice as the sole spice added for flavouring.

In the USA, it is used mostly in desserts, but it is also responsible for giving Cincinnati-style chili its distinctive aroma and flavour. Allspice is commonly used in Great Britain, and appears in many dishes, including cakes. Even in many countries where allspice is not very popular in the household, as in Germany, it is used in large amounts by commercial sausage makers. In the West Indies, an allspice liqueur called “pimento dram”, is produced. In Greece and Turkey allspice is often used to flavour beef dishes stewed with ripe fresh tomatoes, onions (yahni/yahnisi = “ragout”) and any of a variety of seasonal vegetables.

The allspice tree, classified as an evergreen shrub, can reach 10–18 m in height, although commonly allspice can be a small, scrubby tree, quite similar to the bay laurel in size and form. It can also be a tall, canopy tree, sometimes grown to provide shade for coffee trees planted underneath it. It can be grown outdoors in the tropics and subtropics with normal garden soil and watering. Smaller plants can be killed by frost, although larger plants are more tolerant. It adapts well to container culture and can be kept as a houseplant or in a greenhouse.

To protect the pimenta trade, the plant was guarded against export from Jamaica. Many attempts at growing the pimenta from seeds were reported, but all failed. At one time, the plant was thought to grow nowhere except in Jamaica, where the plant was readily spread by birds. Experiments were then performed using the constituents of bird droppings; however, these were also totally unsuccessful. Eventually, passage through the avian gut, whether due to the acidity or the elevated temperature, was found to be essential for germinating the seeds. Today, pimenta is spread by birds in Tonga and Hawaii, where it has become naturalised on Kauaʻi and Maui.

Allspice was encountered by Christopher Columbus on the island of Jamaica during his second voyage to the New World, and named by Dr Diego Álvarez Chanca. It was introduced into European and Mediterranean cuisines in the 16th century. It continued to be grown primarily in Jamaica, though a few other Central American countries produced allspice in comparatively small quantities.

Volatile oils found in the plant contain eugenol, a weak antimicrobial agent. Other constituents are caryophyllene, methyl eugenol, glycosides, tannins, quercetin, resin, and sesquiterpenes. At the processing units, these volatile essential oils are obtained through distillation process using this spice corn. The outer coat of the allspice berries is believed to have the greatest concentration of some of these medicinally important compounds. Allspice oil has been used as a deodorant component.

The active principles in the allspice increase the motility of the gastrointestinal tract. They also aid in the digestion through facilitating enzyme secretions inside the stomach and intestines. Allspice also has anti-inflammatory, rubefacient (warming and soothing action), carminative (anti-flatulence) properties. The spice also contains a good amount of minerals like potassium, manganese, iron, copper, selenium, and magnesium. There is also a considerable amount of vitamin A, vitamin B-6 (pyridoxine), riboflavin, niacin, and vitamin-C.

In the language of flowers, bouquets adorned with strings of allspice berries indicate “compassion – my heart feels compassion for you”. A rare bouquet containing allspice flowers means “your heart and is tender and compassionate”.

This post is part of the Floral Friday Fotos meme.
Posted by Intelliblog at 14:40 0 comments 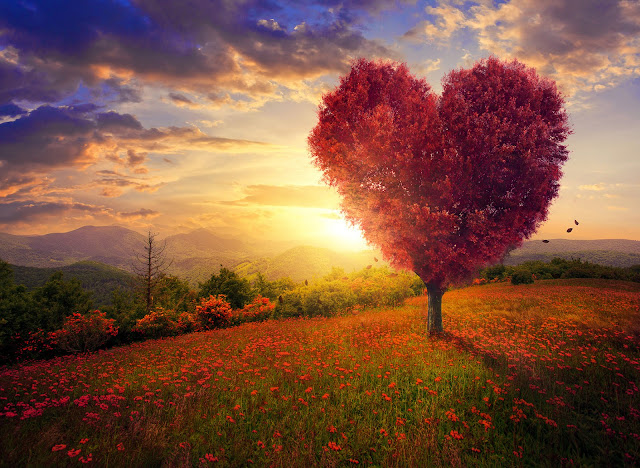 “If you wish to be loved – love!” - Lucius Annaeus Seneca

Poets United this week (quite aptly with Valentine’s Day just celebrated) has as its Midweek Motif the theme of “love”. Here is my contribution:

What a feeling... Almost nothing,
In my mind and in my heart;
It is nothing or it’s something;
But it makes me jump and start...

What could I be lacking now?
What I need and what I want
Would my sweetest fate allow,
Or its lack my dreams to haunt?

Is it hunger, is it thirst?
No, my stomach wildly turns.
What to wish for, should I, first?

Ease of mind, for which it yearns?
Or peace of heart, about to burst?
Sweet this feeling, but how it burns!
Posted by Intelliblog at 01:32 14 comments 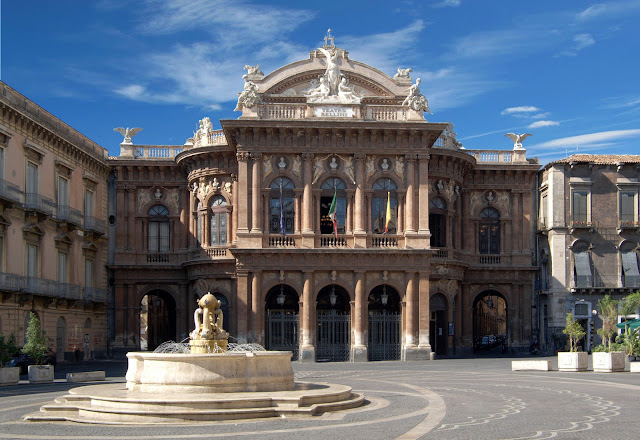 “Sicily is the pearl of this country. Since old times, travellers from the most far away country boast of its merits, praise its territory, rave about its extraordinary beauty, and highlight its strengths, because it brings together the best aspects from every other country.” - Al-Idrisi

Catania is well known for its historical earthquakes, having been destroyed by catastrophic earthquakes in 1169 and 1693, and for several volcanic eruptions from the neighbouring Mount Etna, the most violent of which was in 1669.

Catania has had a long and eventful history, having been founded in the 8th century BC. In 1434, the first university in Sicily was founded in the city. In the 14th century and into the Renaissance period, Catania was one of Italy's most important cultural, artistic and political centres. The city has a rich culture and history, hosting many museums, restaurants, churches, parks and theatres. Catania is well known for its street food.

The opera composer Vincenzo Bellini (1801 – 1835) was born in Catania, and a museum exists at his birthplace. The Teatro Massimo "Vincenzo Bellini" (in the photo above), which opened in 1890, is named after the composer. The opera house presents a variety of operas through a season, which run from December to May, many of which are the work of Bellini.

Posted by Intelliblog at 02:10 6 comments