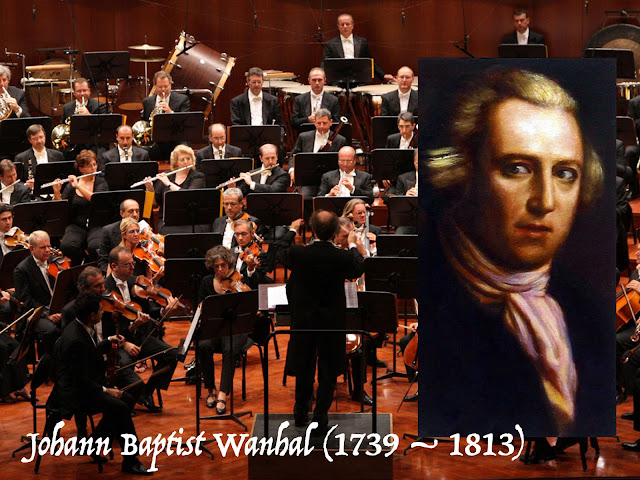 “Vienna is the gate to Eastern Europe.” - Niki Lauda

Johann Baptist Wanhal (May 12, 1739 – August 20, 1813), also spelled Waṅhal (the spelling the composer himself and at least one of his publishers used), Wanhall, Vanhal and Van Hall (the modern Czech form Jan Křtitel Vaňhal was introduced in the 20th century), was an important Czech classical music composer. He was born in Nechanice, Bohemia, and died in Vienna.

Wanhal was born in Nechanice, Bohemia, into serfdom in a Czech peasant family. He received his first musical training from his family and local musicians, excelling at the violin and organ from an early age. From these humble beginnings he was able to earn a living as a village organist and choirmaster. He was also taught German from an early age, as this was required for someone wishing to make a career in music within the Habsburg empire.

In 1760, at the age of 21 Wanhal must have been well under way to become a skilled performer and composer, as his patron, the Countess Schaffgotsch, took him to Vienna as part of her personal train. There he quickly established himself as a teacher of singing, violin and piano to the high nobility, and he was invited to conduct his symphonies for illustrious patrons such as the Erdődy families and Baron Isaac von Riesch of Dresden. During the years 1762-63, he is supposed to have been the student of Karl Ditters von Dittersdorf, even though they were born the same year. Baron Riesch sponsored a trip to Italy in 1769, so that Wanhal could learn the Italian style of composition, which was very much in fashion. To return the favour, Wanhal was supposed to become Riesch’s Kapellmeister.

The details of Wanhal’s journey to Italy (1769–1771) are scant, but it is known that he met his fellow Bohemians Gluck and Florian Gassmann in Venice and Rome respectively. The Italian journeys present the only knowledge we have of Wanhal writing operas: He is supposed either to have written operas over the Metastasian operas Il Trionfo di Clelia and Demofonte, either by himself, or as a cooperation with Gassmann, where Wanhal supplied some or all of the arias; these works have been lost. In additions to his documented travels in northern and central Italy, Wanhal was supposed to travel to Naples – arguably the most important centre of music in Italy at the time – but never seems to have gotten there.

After his journey to Italy, Wanhal returned to Vienna in 1771 rather than to go to Riesch in Dresden. Claims have been made that Wanhal became heavily depressed or even insane, but these claims are likely to have been overstated. During this period he is supposed to occasionally have worked as a de facto Kapellmeister for Count Erdődy in Varaždin, although the small number of compositions by him remaining there suggests that this was not the full-time employment that would have been expected from Riesch, which may have been why he preferred it. There is no evidence of visits after 1779.

Around 1780, Wanhal stopped writing symphonies and string quartets, focusing instead on music for piano and small-scale chamber ensembles, and Masses and other church music. The former, written for a growing middle class, supplied him with the means to live a modest, economically independent life; for the last 30 years of his life he did not work under any patron, probably being the first Viennese composer to do so. During these years, more than 270 of his works were published. In the beginning of the period he was still an active participant in Viennese musical life, as is witnessed in Michael Kelly’s legendary account of the string quartet Wanhal played in together with Haydn, Mozart and Dittersdorf in 1784. After 1787 or so, however, he seems to have ceased performing in public, but he nevertheless was economically secure, living in good quarters near St. Stephen’s Cathedral. He died in 1813, an elderly composer whose music was still recognized by the Viennese public.

Wanhal had to be a prolific writer to meet the demands made upon him, and attributed to him are 100 quartets, at least 73 symphonies, 95 sacred works, and a large number of instrumental and vocal works. The symphonies, in particular, have been committed increasingly often to compact disc in recent times, and the best of them are comparable with many of Haydn’s. Many of Wanhals symphonies are in minor keys and are considered highly influential to the “Sturm und Drang” movement of his time.

Around 1780 Wanhal seems to have stopped writing large-scale instrumental music, and rather contented himself with writing piano music for the growing middle class, and church music. In the former category his programmatic pieces, often related to recent events such as “The Battle of Würzburg”, “The Battle of Abukir”, and “The Return of Francis II in 1809”. Judging from the number of extant manuscripts available, these works must have been highly popular. Wanhal was also the most prolific writer of Masses and other Catholic church music of his generation in Vienna. Despite this, it appears that he was never in the employ of any religious institution. This means that his late Masses are both testaments to a genuine personal faith, and evidence of how lucrative his focus on incidental piano music must have been. 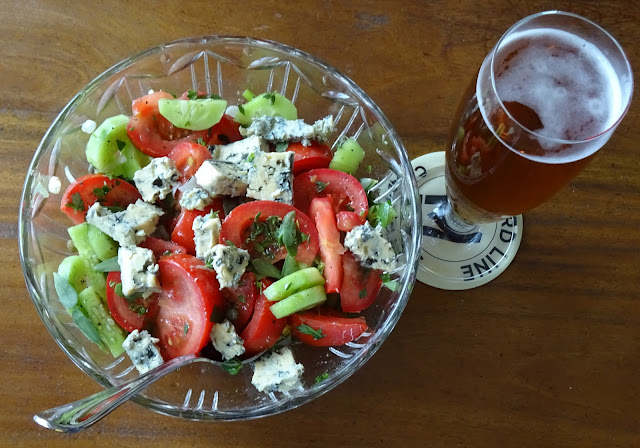 “It’s difficult to think anything but pleasant thoughts while eating a homegrown tomato.” - Lewis Grizzard

Our weather here in Melbourne has suddenly turned very hot with temperatures in the mid- to high 30s. Meals tend to be quickly prepared and salads are very much de rigueur! A friend of ours gave us some home-grown tomatoes and cucumbers so we took advantage of this delicious produce that were sun-ripened on the vine and made a Summer Salad.

Method
Wash the vegetables and chop them up. Add the washed purslane by picking off tops and tender leaves and discarding the lower stems.
Make the dressing by mixing 2 tbsp olive with 1 tbsp vinegar and adding salt and pepper to taste.
Add the cheese and toss the salad at the table, just before serving.


This post is part of Marie's Food Friday meme.
Posted by Intelliblog at 19:28 1 comments 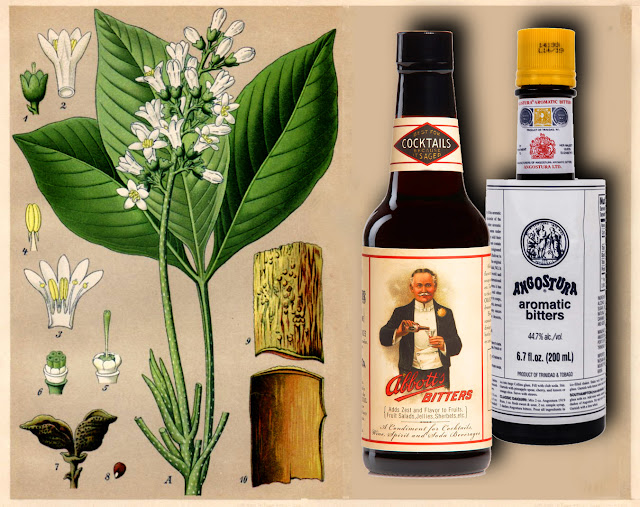 “In Old Havana, the names of the streets before the revolution provided a glimpse into the city's state of mind. You might have known someone who lived on the corner of Soul and Bitterness, Solitude and Hope, or Light and Avocado.” - Brin-JonathanButler

Angostura trifoliata or Galipea cusparia, known as angostura, cuspa, galipea or chuspa, is a species of medicinal plant, a tree of the Rutaceae family originating in South America, originally from Venezuela. Its bark is used for its bitter principles.

This plant was known in Spain and Europe by various botanists in the post-colonial period, the greatest spread being from the Catalan Capuchins of Angostura (Orinoco-Caroní), who were exporting the bark to their sister convents in Spain. When Humboldt and Bonpland visited these missions in the early 1800s, the Capuchins identified the tree from which angostura bark was obtained. Humboldt recommended naming the plant to honour his friend Bonpland (hence the synonym Bonplandia trifoliata).

Angostura trifoliata is a tree about 15 to 25 m high with tripartite leaves up to 60 cm long, on long petioles, possessing an unpleasant, pungent odour. The leaves are ovo-lanceolate, sessile, pointed and have white spots on the stem. The flowers appear in long axillary clusters, white and with plumes hairy on the outside. The bark is brownish-gray. The angostura plant has been studied for its antibiotic potential and cytotoxic activity. The bark is the main source of these medicinal properties. Natives make use of the bark by grinding it and spraying the powder in the water, which is used to stun the fish, which are then collected.

The bark is used in various preparations as a bitter tonic, an aromatic flavouring, a respiratory stimulant, a febrifuge and a carminative. In higher doses it is emetic and laxative. In natural medicine it is used in the treatment of chronic gastritis, dyspepsia, lack of appetite, gastric hypoacidity.

Although it shares its name with Angostura Bitters, which was named in honour of the city of Angostura, Venezuela and does not contain angostura bark. The exact formula of Angostura bitters is a closely guarded secret, with only five people knowing the whole recipe. It is a concentrated bitters, or botanically infused alcoholic mixture, made of water, 44.7% ethanol, gentian, herbs and spices.

Abbot’s Bitters is a brand of aromatic/medicinal bitters popular in the 1920s and produced up until the mid-1950s. It has been resurrected along with a reproduction of the label and what is thought to be a close recreation by the team at Tempus Fugit Spirits Company.

In cocktails the use of very small quantities of bitters is much appreciated, and they introduce a complexity of flavour that enhances the taste of characteristic drinks, such as the Manhattan or pink gin. 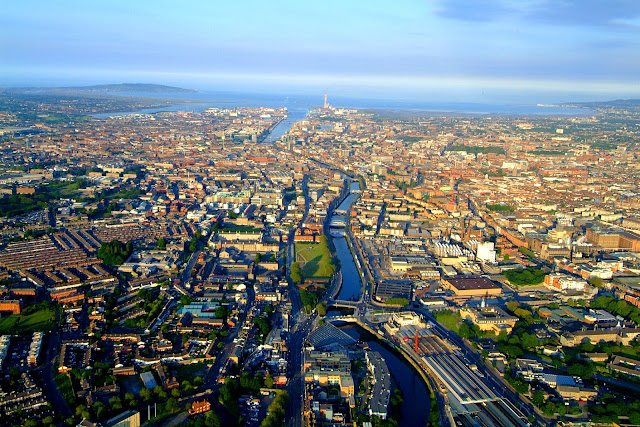 “We may have bad weather in Ireland, but the sun shines in the hearts of the people and that keeps us all warm.” - Marianne Williamson
Welcome to the Travel Tuesday meme! Join me every Tuesday and showcase your creativity in photography, painting and drawing, music, poetry, creative writing or a plain old natter about Travel!

Dublin (Irish: Baile Átha Cliath) is the capital and largest city of Ireland. Dublin is in the province of Leinster on Ireland's east coast, at the mouth of the River Liffey. The city has an urban area population of 1,345,402. The population of the Greater Dublin Area, as of 2016, was 1,904,806 people.

Founded as a Viking settlement, the Kingdom of Dublin became Ireland's principal city following the Norman invasion. The city expanded rapidly from the 17th century and was briefly the second largest city in the British Empire before the Acts of Union in 1800. Following the partition of Ireland in 1922, Dublin became the capital of the Irish Free State, later renamed Ireland.

Dublin is administered by a City Council. The city is listed by the Globalisation and World Cities Research Network (GaWC) as a global city, with a ranking of “Alpha-“, which places it amongst the top thirty cities in the world. It is a historical and contemporary centre for education, the arts, administration, economy and industry.

Posted by Intelliblog at 02:52 9 comments