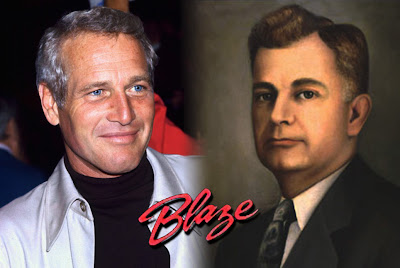 “We'd all like to vote for the best man, but he's never a candidate.” - Frank McKinney "Kin" Hubbard

I am travelling for work again and this time it’s lovely Adelaide. However, as it is Movie Monday, here is a brief review of a film we watched last weekend. It is Ron Shelton’s 1989 movie “Blaze”, with Paul Newman and Lolita Davidovich. It is a biographical comedy/drama of the life and times of Earl K. Long, three-time Governor of the US state of Louisiana between 1939 and 1960. His affair with Blaze Starr, a stripper dominates the story and the title of the movie shifts the emphasis a little from the politician to the “entertainer”. It is a romanticized and somewhat sanitised version of the truth, but one may have difficulty in determining what indeed may be the real truth. Especially where politicians are concerned…

The film was mildly amusing and the two leads played tolerably well, although Newman’s brilliance is lacking and the film suffers from pedestrian direction and predictable story-telling in a plot that is formulaic despite the real-life steamy hot mix that was available to the screenplay writer (Ron Shelton). The film lacks a clear theme. It starts out as a biographical drama of Blaze’s life, then the larger-than-life Earl comes into the scene, and there is a half-baked attempt at making the film relevant to equal rights issues. A very strange mix that doesn’t work particularly well, but which has a few good moments and is saved by the acting of the leads.

A sin of omission (and commission) in this movie is that Earl was married to Blanche Revere Long while he was having his affair with Starr. In the film he is a bachelor who is a bit of a dirty old man. It was in fact Blanche that got him committed to a mental asylum, from which (bizarre as it may seem) he continues to run the state as there was no law at the time to prevent a mentally incapacitated governor to continue his office. Real life Blaze Starr herself has a small part in the movie (as Lily).

There are a few good one liners in the movie and one may chuckle here and there. However, for a two-hour long movie, it fails to deliver what could have been made into an engrossing (seemingly short) Long-tale. Earl K. Long was certainly a colourful character and I am sure that fact must surely have been stranger than fiction in his case. If you come across the movie have a look at it, but don’t go out of your way to specifically look for it.

Have a good week!
Posted by Intelliblog at 00:32