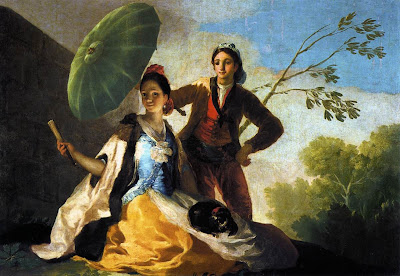 “Every artist dips his brush in his own soul, and paints his own nature into his pictures.” - Henry Ward Beecher
Francisco de Goya y Lucientes (1746-1828) is one of the greatest artists that Spain has ever produced and is considered the “Father of Modern Art”. His works, which are world renowned, changed the way artists saw the world. His work spanning 60 years from about the last half of the 18th century to the first quarter of the 19th century portray a celebration of life and a realistic view of the world.

Goya was born in the province of Zaragoza. When he was a teenager, he entered the service of a local artist. Later on, he travelled to Madrid, where he was greatly influenced by the last of the great Venetian painters. After several failed attempts to enrol in the Royal Academy of San Fernando, Goya went to Rome. Returning to Spain in the decade of the 1770s, Goya painted frescoes in several churches of his native province.

After his wedding, Goya began to rise in fame, working under Mengs, and then finally joining the royal academy and becoming King Charles III’s court painter. In 1799, Goya became the official painter of King Charles IV. But by this time he had suffered an illness, which left him deaf, and his alienation from the pomposity of the Court began. He produced dark works at this time. Goya with his wild imagination portrayed sordid images of a surreal world. Unable to present his works to his usual clientele, he is forced, under the threat of the Inquisition, to withdraw his works. Meanwhile he continued with his services as court painter.

By this time political and social upheaval connected with the Napoleonic kidnap of the Spanish crown and the invasion of Spain, Goya produced the famous painting “2nd of May of 1808”, and other pieces in which the artist epitomised the suffering and the realism of war as never before seen. Ferdinand VII, King of Spain, appoints Goya as the court painter again after the war, but by this time the artist’s convictions lead him to witness the vanity of court life. This begins his period known as the black paintings. A decade later, after having witnessed the excesses and the attempt to enforce an absolutist regime by Ferdinand VII, Goya decides to leave Spain to settle in Southern France where he died.

Because of the richness of works from Goya, one can witness how his attitude towards life and the world evolves and changes, as the socio-political events surrounding him shift. Goya is considered, with El Greco and Diego Velázquez, one of the greatest Spanish masters. Just as Goya found inspiration in the work of Velázquez, so Goya in turn inspired Edouard Manet and Pablo Picasso. He left no immediate followers of consequence, but his influence was strongly felt in mid-19th-century painting and printmaking and in 20th-century art.

Here is one of Goya’s lightest and breeziest paintings from early in his career. It is called “The Parasol” (1776-8) and evokes sunny carefree days of youth and insouciance. The artist’s wonderful sense of colour and light is already apparent in this canvas and his composition is masterly.
Posted by Intelliblog at 00:42