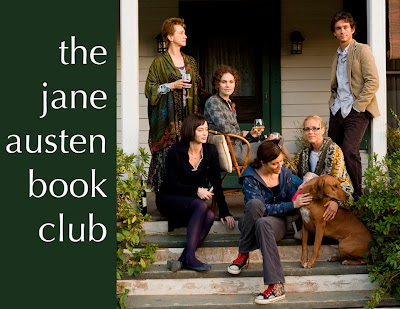 “Having your book turned into a movie is like seeing your oxen turned into bouillon cubes.” - John LeCarre

Films made from novels can be a real mess, especially if the novel is one you have enjoyed reading very much. It is seldom that a novel can give rise to a good movie, but I have seen some such films, proving that if the sensitivity is there, a film-maker can do justice to the author. The film we watched last weekend was an interesting concept, which was a film based on a novel, which novel was based on six other novels. Highly derivative, and here I am writing about it, adding yet another layer on top of everything.

Authors have always been inspired by other authors and novels have inspired other novels. Quite fashionable in the last few years are “reading group novels”, where the novel revolves around a group of people who take part in a book club that discusses a new novel every month. I recently read one by Elizabeth Noble called “The Reading Group”, which was rather soppy and not worth bothering with. Before that I read “Reading Lolita in Tehran” by Azar Nafisi, which was much better, and quite enjoyable. Now this film based on a book I haven’t read (nor do I wish to read, now that I have seen the film), the book being “The Jane Austen Book Club” by Karen Joy Fowler.

The film of “The Jane Austen Book Club” was made in 2007 by Robin Swicord, who also wrote the screenplay. Let me warn you, this is a classic “chic flick”, which is all about a group of six Californians who get together to discuss Jane Austen’s novels, one a month for six months. There are five women and one man, all at some crisis point in their lives and all identifying with characters and plots out of Jane Austen’s books. Although there are references to Austen’s novels in the film, even if you haven’t read the novels you can follow the film and I promise it won’t spoil your reading of Austen.

There is a lot of talking in the movie – a couple of witty lines, but also a lot of plain old gas-bagging. Some of the characters are very unlikeable and although the acting is good, the plot is quite trite and the ending gratuitously out of fantasyland. The characters the actors portray are very shallow and there is little genuineness in the film, whether it’s turns in the plot, depth of characterisation, or even a token tragic ending for one of the couples (in the film they all end up deliriously happy).

It was pleasant enough to watch, but I would not watch it again, nor would I recommend it highly to anyone else to watch, unless it’s on cable and you have 106 minutes to kill. I guess it was a bit like a soap opera, brain junk food – of little nutritive value but moderately toothsome at the time of consumption. Some of the excellent film adaptations of Jane Austen’s novels would be better to watch and infinitely more enjoyable.

I wonder if anybody reading this has read the novel from which the movie was made? Perhaps you can tell us about it, whether it was better than the film…
Posted by Intelliblog at 21:06