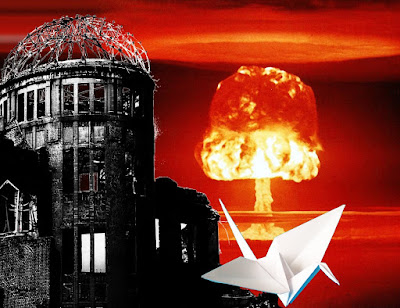 August 6th marks the day of a sad anniversary, that of the destruction of Hiroshima in Japan, after the first atomic bomb was dropped there by US war planes towards the end of World War II, at 8:15 am on Monday August 6th, 1945. This was on order of President Truman who was reacting to the Showa Regime ignoring his ultimatum. The bomb killed about 140,000 people in Hiroshima from injuries or the combined effects of flash burns, trauma, and radiation burns, compounded by illness, malnutrition and radiation sickness. In survivors, leukaemia and solid cancers occurred with much greater incidence than in the general population and this is attributed to exposure to radiation released by the bombs. The majority of the dead were civilians. Including many women and children. A second bomb was dropped over Nagasaki on August 9th killing 80,000 people.

The survivors of the bombings are called hibakusha (“explosion-affected people”). The shock and great suffering in the wake of the bombings caused Japan to seek the abolition of nuclear weapons from the world ever since, putting in place one of the world’s most committed and extensive non-nuclear policies. More than 400,000 hibakusha (258,310 in Hiroshima and 145,984 in Nagasaki) are recorded in Japan.

nuclear age |ˈn(y)oōklēər; āj| noun
The period in history usually considered to have begun with the first use of the atomic bomb in 1945. It is characterised by nuclear energy as a military, industrial, and sociopolitical factor. Also called “atomic age”.
ORIGIN: Early 18th century: From Latin, literally ‘kernel, inner part,’ diminutive of nux, nuc- ‘nut’ and, Middle English: From Old French, based on Latin aetas, aetat-, from aevum ‘age, era.’
USAGE: A variant pronunciation, |ˈn(y)oōkyələr|, has been used by many (even the famous…), but is widely regarded as unacceptable…

Jacqui BB is hosting Word Thursday.
Posted by Intelliblog at 01:08