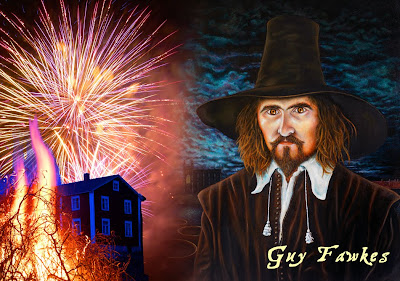 “Treason and murder ever kept together, As two yoke-devils sworn to either's purpose, Working so grossly in a natural cause That admiration did not whoop at them; But thou, 'gainst all proportion, didst bring in Wonder to wait on treason and on murder; And whatsoever cunning fiend it was That wrought upon thee so preposterously Hath got the voice in hell for excellence.” – William Shakespeare


Please to remember    The Fifth of November,    Gunpowder treason and plot;     I see no reason    Why gunpowder treason    Should ever be forgot.        ‘Twas God’s mercy to be sent    To save our King and Parliament    Three score barrels laid below,    For old England’s overthrow    With a lighted candle, with a lighted match    Boom, boom to let him in.
Anonymous Hertfordshire Rhyme

November 5th is the anniversary of the Gunpowder Plot, which was a conspiracy to blow up the English Parliament and King James I in 1605, the day set for the king to officially open Parliament. This act of treason was intended to be the beginning of a great uprising of English Catholics, who were distressed by the increased severity of penal laws against the practice of their religion. The conspirators, who began plotting early in 1604, expanded their number to a point where secrecy was impossible.

Thomas Percy hired a cellar under the House of Lords, in which 36 barrels of gunpowder, overlaid with iron bars and firewood, were secretly stored. The conspiracy was brought to light through a mysterious letter received by Lord Monteagle, a brother-in-law of Tresham, on October 26, urging him not to attend Parliament on the opening day. This anonymous letter read:

“My lord, out of the love I bear to some of your friends, I have a care for your preservation. Therefore I would advise you, as you tender your life, to devise some excuse to shift of your attendance of this Parliament, for God and man hath concurred to punish the wickedness of this time. And think not slightly of this advertisement but retire yourself into your country, where you may expect the event in safety, for though there be no appearance of any stir, yet I say they shall receive a terrible blow, the Parliament, and yet they shall not see who hurts them. This counsel is not to be contemned, because it may do you good and can do you know harm, for the danger is past as soon as you have burnt the latter: and I hope God will give you the grace to make good use of it, to whose holy protection I commend you.”

The 1st earl of Salisbury and others, to whom the plot was made known, took steps leading to the discovery of the materials and the arrest of Fawkes as he entered the cellar. Other conspirators, overtaken in flight or seized afterward, were killed outright, imprisoned, or executed.

Among those executed was Henry Garnett, the superior of the English Jesuits, who had known of the conspiracy. While the plot was the work of a small number of men, it provoked hostility against all English Catholics and led to an increase in the harshness of laws against them. Guy Fawkes Day, November 5, is still celebrated in England with fireworks and bonfires, on which effigies of the conspirator, called “guys”, are burned. The word came to mean any strange-looking person and later came to be applied in a derogatory sense to any man (some American lexicographers, however, derive ‘guy’ from a Spanish word).

treason |ˈtrēzən| noun (also high treason)
the crime of betraying one's country, esp. by attempting to kill the sovereign or overthrow the government : they were convicted of treason.
• the action of betraying someone or something : doubt is the ultimate treason against faith.
• ( petty treason) historical the crime of murdering someone to whom the murderer owed allegiance, such as a master or husband.

ORIGIN Middle English : from Anglo-Norman French treisoun, from Latin traditio(n-) ‘handing over,’ from the verb tradere.
Posted by Intelliblog at 00:41