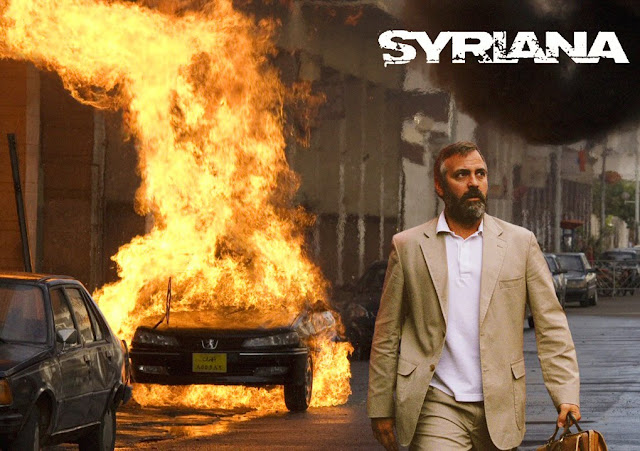 “The cure for boredom is curiosity. There is no cure for curiosity.” - Dorothy Parker

We watched Stephen Gaghan’s 2005 film “Syriana” at the weekend. The cast featured George Clooney, Matt Damon, William Hurt and Christopher Plummer. The idea was admirable and the plot ever topical and worthy of coverage. However, this was one of the most boring movies we have watched in the last few months. The writer/director is well out of his depth and the result is a film that we “all have to see because it concerns us” but which unfortunately causes great distress not because of the subject matter but because of the pedestrian way in which it has been made. Add to that a director who wants to gain “avant-garde brownie points” – hence perhaps the disjointed nature of the narrative.

I was completely interested in the subject matter, I am aware of the dirty games that are played with oil around the world, I have read about the corrupt politics and have seen documentaries that deal with the issues. I looked forward to the film, especially after having read some of the favourable reviews of the movie. Imagine my disappointment when I spent over two hours trying desperately to become involved in this convoluted and overly didactic film. I was repelled by all the characters and could not sympathise with anyone – not even the supposed good guys! That’s bad in a movie!

The film set out to be a whistle blower of CIA’s involvement in supporting America’s big business interests (surprise?) It was also to show that by meddling in the very complex politics of the region, the CIA continually creates the very problems it is trying to “resolve” and therefore contributes to the continuing lack of stability in the Middle East and which result in, for example, terrorism (oh, really?!). The battle to control the US (and therefore world) supply of oil is the main theme of the movie, but references are also made to the global arms and drug trades (hmmm, they’re related, are they?). There are token references to human relationships and some dialogue that attempts to join the disjointed mess of the plot together. The actors try very hard, but unfortunately end up being very trying.

I wanted this movie to be a hard-hitting, involving, clear and incisive exposé of an important cluster of interrelated international issues. However, all I got out of it was a muddled, very poorly written, rambling attempt to “disclose” something that we all knew and it did it in a patronising and boring manner. The acting was dull and I fail to see how George Clooney won a best supporting actor Oscar for it! The filmmaker failed in delivering an engaging and interesting movie. I was not involved, the film did not draw out an emotional response from me. I neither laughed nor cried, was not amused, was definitely not captivating.

I cannot recommend that you see this film. It is full of self-importance and pats itself on the back too hard and too loudly. Empty vessels make the loudest noises…
Posted by Intelliblog at 01:42