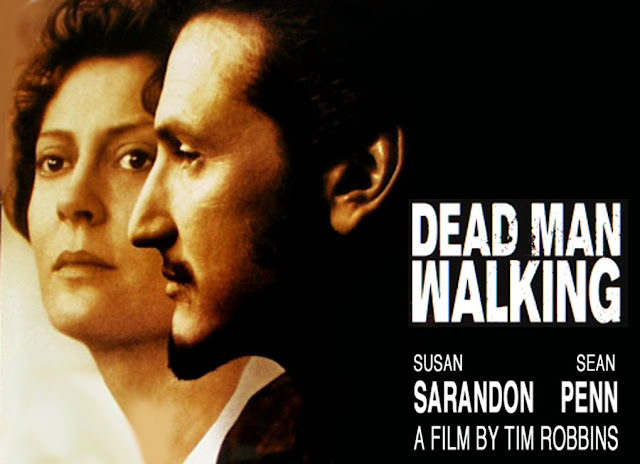 “Only the man who has enough good in him to feel the justice of the penalty can be punished.” - William Ernest Hocking

Today was the Queen’s Birthday holiday here in Australia and we went for a drive in the morning to the City. There were relatively few people around and not much traffic, most people making most of the long weekend to go away, it seems. We then came back home for lunch and afterwards worked in the garden, pruning some rosebushes. We have over 70 rosebushes in the back and taking care of them is hard work. The abundant roses we have for quite a few months of the year makes the hard work worthwhile. Thorns and all…

This evening we watched a 1995 film directed by Tim Robbins, based on the autobiographical book by Sister Helen Prejean, “Dead Man Walking”. This was quite a harrowing film and at just under two hours it made watching it rather gruelling. Nevertheless it was an excellent film that explored some valid questions about crime and punishment, redemption, vengeance, religion, forgiveness and unconditional love. Susan Sarandon received a best actress Oscar for her sterling performance in this role and both Sean Penn and Tim Robbins were also nominated for best actor and best director. Both nominations well-deserved.

The plot of the film concerns Sister Helen Prejean (Sarandon), who works in the poor African-American St. Thomas Projects of New Orleans, doing much to educate and enlighten the children in this slum. She receives a desperate letter from the convicted murderer, Matthew Poncelet (Penn), on death row, who is trying to find help to avoid his execution for murder. She responds to Poncelet’s letter, which leads her to visit him in gaol. Sister Prejean is completely inexperienced in criminal chaplaincy, but his plight and her doubt over his guilt persuade her to be Poncelet’s spiritual counsellor. She gets Poncelet a lawyer, Hilton Barber, who helps Poncelet appeal his conviction with the State Board of Capital Punishment, Governor Benedict of Louisiana, and the State of Louisiana Supreme Court. However, all these interventions are without success and Poncelet remains on death row.

As the nun gets to know the convict, she begins to feel empathy, not only for the criminal, but also for the victims and their families. The families cannot understand how the nun can help a man who committed such heinous crimes, killing a young man and woman and raping the woman before he killed her. The anguish the nun feels while attempting to make the murderer become spiritually aware and take responsibility for his actions, achieving redemption, while trying to care for the victims of crime makes for a confronting film.

The major point of the film is the whether capital punishment can ever be justified and it makes the viewers examine their own views on this topic. The shocking images of the actual crime are intercut with Sister Prejean’s attempt to make Poncelet achieve a state of contrition and redemption. This is heart-rending, especially as the parents of the murdered teenagers talk lovingly of their murdered children to the nun, who is also the spiritual counsellor of the rapist and murderer. The murder’s mother and his brothers are also superimposed on the action, and their reactions further add to the pathos of the situation.

We found ourselves, as we watched, debating the type of punishment that society must mete out to such hardened criminals. Whether capital punishment is ever an answer and whether the Old Testament “an eye for eye and a tooth for tooth” is ever justified, given the New Testament’s emphasis on forgiveness and redemption. Religion aside, sociologically one considers the terrible dilemma we find ourselves in: The shocking cruelty and heinous violence of the crime committed, the everlasting pain of the victims’ families that makes one really think on what can possibly be a suitable punishment for the perpetrators. This is especially true if one is morally opposed to capital punishment.

One of the most chilling scenes in the movie we found to be the execution of Poncelet, with the parents of the murdered teenagers watching on as the lethal injection is administered. The figure of the murderer splayed out like a man crucified waiting to die while the parents watch on, as justice is being done, sent shivers down my spine. Yet, the man was guilty by his own admission and no amount of contrition could bring those who were foully murdered back. I kept feeling that this punishment was unjust, perhaps because the criminal had his misery cut short. There was no time for him to dwell on his remorse…

I recommend this film most highly. It is an intelligent one, made with care and gives due consideration to both the criminal and his victims of his crime. The insurmountable problems that our society has in dealing with such situations is personified in Sister Prejean who has to deal with the conflicting emotions of mercy, forgiveness, religious clemency and her rising anguish, disgust and horror as she confronts the magnitude of the crime and its effects on the families of the survivors as well as the murderer’s own family. The music of the film provides an excellent counterpoint to the action and the direction is extremely good.
Posted by Intelliblog at 02:13