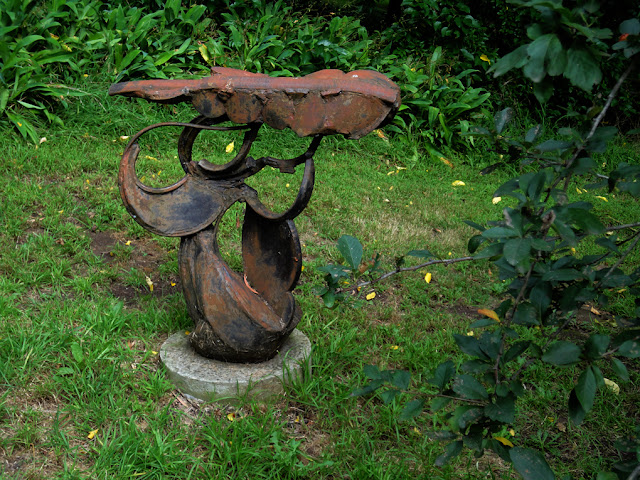 “Sculpture is the best comment that a painter can make on painting.” - Pablo Picasso

It turned out to be a beautiful autumn day today. Sunny, mild and calm. We went out for a drive and after visiting a market we went to the Heide Art Gallery, but rather than confine ourselves to the interior and the exhibition of some rather freaky Albert Tucker Australian modernist paintings, we decided to spend the whole of the beautiful day on the grounds. It seems that many people had the same idea as there were visitors all over the place, people having picnics, tourists, families with children and elderly couples out for a stroll.

There is a huge range of sculptures on show on the grounds and one can find all sorts of styles, but largely the theme is modern art, with some outrageously cheeky pieces, as well as some horrific concoctions that make the wonderful art there even better. Nevertheless, as much as one enjoys the art, nature is the supreme artist on the grounds and every season one can find a number of blooms on show, as well as various fruits and magnificent trees, herbs, ground covers and wildflowers displayed in the way that only nature can.

One of the best places to start from is the kitchen garden, with its rows of seasonal vegetables, herbs and flowers, which offers not only a crop for the table, but also delights the senses with wonderful colours, forms, rich smells and delightful textures. Even in autumn this garden was beautiful and we enjoyed rambling around its paths and admiring the plethora of plants growing there. There were ripe figs (delicious as we sampled them), acorns, wild strawberries, rose hips, haws, seeds of every kind ripening on the spent flower stalks. There cleomes in bloom, geraniums and sage, mallows, jack-in-the-pulpit, late roses, callistemons, naked lady lilies, bachelors’ buttons, cyclamens, and many kinds of daisies and asters.

For Art Sunday, here is a sculpture from the Heide grounds. It is David Wilson’s “Small Sculpture for my Grandmother’s Vase”, created in 1990. David Wilson arrived in Australia in 1965 having studied painting at the Harrow School of Art in England. He completed his Associate Diploma in Sculpture from the National Gallery School, in Melbourne in 1970. Much of his earlier sculptural works were very much within the welded steel tradition often associated with the work of Anthony Caro. From the 1980s onwards, texture and later paint became key elements in his work. With a painter’s eye, he uses colour for constructing space and volume.

I like this particular sculpture as it is compact and reminds me of something familiar and homey, although one cannot quite say what it is exactly. It looks like a table, or maybe even a chair or a stool, a magazine rack, or a letterbox. At the same time it’s quite fluid, graceful, organic and almost floral in its arrangement. Truly something fit for a vase. It is pleasing and perfect for the garden setting it is in.

The artist has this to say about his sculptures:

“Much of the inspiration for both forms and colours comes from observations of landscape and skyscape, particularly the skies which I often photograph as a source material. The look of the sky seems to be one of our few remaining daily surroundings unblemished by human interference - it is distant, uncompromised, both innocent and indifferent – and it is these aspects of its character which make it so suitable a source for an artist who has become somewhat contemptuous of our culture’s preoccupation with itself. A kind of incest where humanity and its delusions are treated as the measure of all things. The look of the sky, shapes and colours, seems untouched and invulnerable to our conceits. I want my sculptures’ physical presence and painterly textured surfaces to seem to share that cited innocence and indifference, to be unequivocally ‘there’ and ‘here’, but apart, never really known except in the experiencing of them, alluding to things natural, without ever being able to be placed.”
Posted by Intelliblog at 00:38