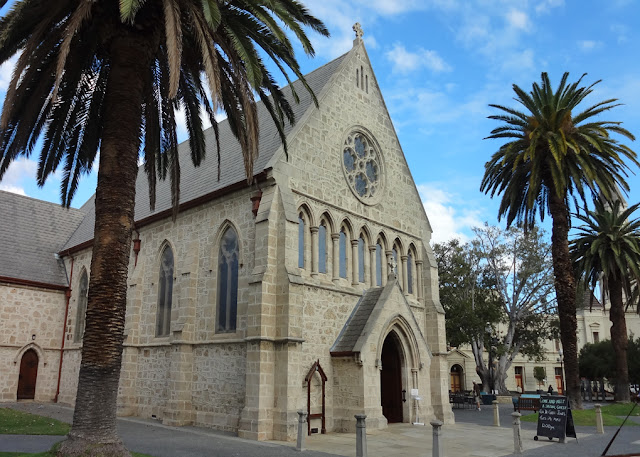 “I have found out that there ain’t no surer way to find out whether you like people or hate them than to travel with them.” - Mark Twain

I had a full morning at the conference again today, but fortunately the afternoon was spent having some respite. It was good to go out and relax and forget about work for a while. Decided to go to Fremantle for the afternoon, which proved to be an excellent idea, as the weather was good. We took the train (at $9 for a family return ticket was excellent value) and in 30 minutes we were there. Initially the train was packed as the football was on in the Subiaco Oval and the West Coast Eagles, the home team, was playing.

Fremantle or “Freo” as the locals call it, has a character all of its own and it is so different from that of Perth. There are many fine old buildings that are well preserved and restored to their former glory and one can sense history pervading every street corner when one walks around. The town boasts the best preserved example of a 19th century port streetscape in the world with its world-famous heritage buildings and a fascinating maritime and convict history. Fremantle is a still a busy port and for many people, their first experience of Australia.

The back streets are dotted with dockworkers’ cottages, warehouses converted into trendy apartments and off-the-beaten track local haunts.  Essential stops on the Fremantle WA history trail include WA’s earliest convict jail, the “Roundhouse”, the more substantial Fremantle Prison and the WA Maritime Museum. The Town Hall is a fine example of civic architecture and there are also a number of beautiful old churches.

Supporting this rich history is a strong creative streak that can be sampled in the local arts, crafts, jewellery and hearty food available in the renowned Fremantle Markets. High Street for fashion from local designers, art galleries and Aboriginal crafts and homewares. Most of all, Freo is about soaking up the laid-back ambience; chilling out in a street cafe; enjoying fish and chips fresh off the boat at Fishing Boat Harbour; or enjoying a pale ale at an award winning microbrewery.  Once one is finished relaxing, the town is transformed at night when the street cafes, bars and nightclubs crank up.

The picture is St John’s Anglican Church in Fremantle, a beautiful 130 year-old church with wonderful architecture, magnificent stained glass windows and numerous sculptures both inside and outside the church.
Posted by Intelliblog at 15:27