SOCRATES ON BEING EDUCATED 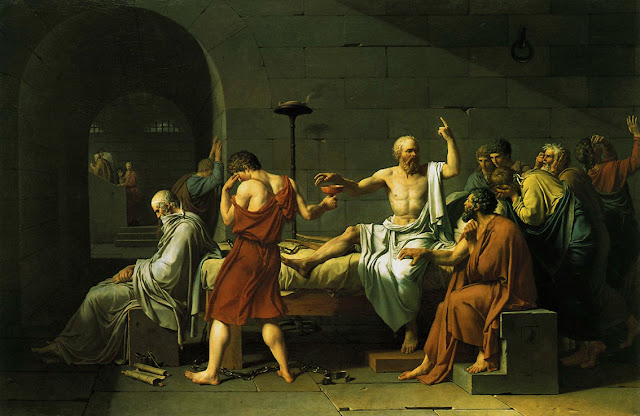 “As for me, all I know is that I know nothing.” - Socrates

To be well educated is a goal that many people aspire to, but especially so if they are parents and they wish to provide what is best for their children. It is quite interesting that most people when asked what a good education is, generally respond with answers that can be summed up as “the collection of a great number of facts in one’s head”… Learning seems to be equated with memorisation of bits and pieces of information. A “smart” person is one that people see as rattling off hundreds of facts (often trivial) and “factoids”. Which needless to say is rather sad!

Others may equate “education” with some lofty activity confined in an ivory tower and engaged in by gowned academics who invariably are balding and wear glasses (amazing also how many people equate wearing glasses with being “brainy”, but that’s another matter…). These university types are far removed from the real world and engage in research and teaching, commonly are absent-minded and disengaged from everyday cares and concerns. They are a fount of knowledge and ostensibly “well-educated”.

My dictionary defines the word “educate” as:
educate |ˈejəˌkāt| verb [ with obj. ]
Give intellectual, moral, and social instruction to (someone, especially a child), typically at a school or university: She was educated at a boarding school.
• Provide or pay for instruction for (one’s child), especially at a school.
• Give (someone) training in or information on a particular field: The need to educate people to conserve water | A plan to educate the young on the dangers of drug-taking.
ORIGIN: Late Middle English: From Latin educat- ‘led out,’ from the verb educare, related to educere ‘lead out’.

Many of us that work in education reflect frequently on the above definition and try to understand our role in the system whereby we provide the context within our students can learn. As an educator I have tried to limit my teaching role and rather provide an environment in which students can learn in a manner that is best suited for them personally. Frequently I find that I am learning as much as they are, while facilitating their learning. Education is an exercise in clear thinking and an enabling of the learners to do the right thing. Good teaching is a facilitation of learning and the best learning comes from self-discovery of one’s own ignorance, the more one learns.

I have often thought of education, teaching and learning through the analogy of a banquet. I as the educator am the cook and host. I provide on the banquet table a selection of healthful, fresh, nutritious and attractive dishes. I ensure that they are served at their best so as to tempt my guests. It is up to them to come in, look at the feast and fill their plate with a balanced, nutritious and well-serving meal…

It may be worthy to consider what Socrates answered when he was asked what a good education was. His response didn’t mention at all the accumulation of facts, but rather it hinged on behaviour. He regarded “well-educated people” as those who:
•    Actively control difficult situations rather than being controlled by them
•    Deal with and face all events with logic and courage
•    Are honest and fair in all of their dealings with other people
•    Face difficult situations, and interact with unpleasant people, in a well-intentioned and pleasant manner
•    Keep a check on their personal desires and control their self-indulgences
•    Are not overcome by their defeats and ill-luck; and finally (and perhaps most importantly),
•    Have not been spoilt by their successes and fame.

Greek philosopher Socrates was tried, convicted, and executed in Athens, Greece, in 399 B.C. In the case of Socrates, the legal proceedings began when Meletus, a poet, delivered an oral summons to Socrates in the presence of witnesses. The summons required Socrates to appear before the legal magistrate, King Archon to answer charges of impiety and corrupting the youth

The preliminary hearing before the magistrate at the Royal Stoa began with the reading of the written charge by Meletus. Socrates answered the charge. The magistrate questioned both Meletus and Socrates, then gave both the accuser and defendant an opportunity to question each other. Having found merit in the accusation against Socrates, the magistrate drew up formal charges.

The document containing the charges against Socrates survived until at least the second century C.E. Diogenes Laertius reports the charges as recorded in the now-lost document: “This indictment and affidavit is sworn by Meletus, the son of Meletus of Pitthos, against Socrates, the son of Sophroniscus of Alopece: Socrates is guilty of refusing to recognise the gods recognized by the state, and of introducing new divinities. He is also guilty of corrupting the youth. The penalty demanded is death.”

Socrates spent his final hours in a cell in the Athens gaol. The ruins of the gaol remain today.  The hemlock that ended his life did not do so quickly or painlessly, but rather by producing a gradual paralysis of the central nervous system. The trial of Socrates, produced the first martyr for free speech. As I. F. Stone observed, just as Jesus Christ needed the cross to fulfil his mission, Socrates needed his hemlock to fulfil his (image above is “The Death of Socrates” by Jacques-Louis David - 1787).

I have blogged about this today as I had an interesting discussion yesterday with a fellow academic and his views differed from my own, and from Socrates’. He did have a bit of a swollen head and his self-importance prevented him from acknowledging something that was obvious to some observers of the conversation. What do you think? Do you agree with Socrates’ views of a well-educated person?
Posted by Intelliblog at 13:40