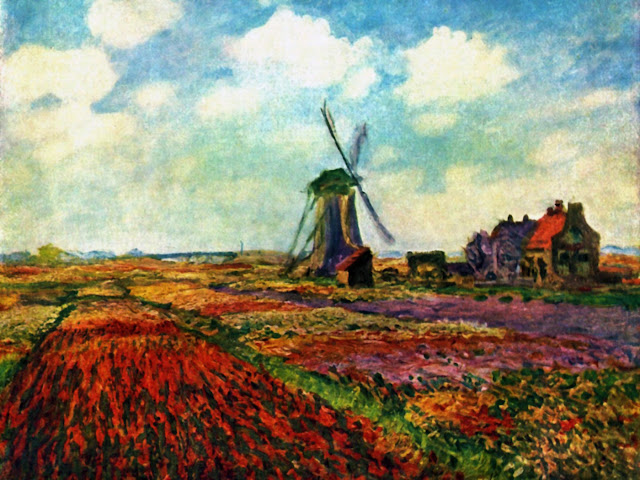 Today we went to the Tulip Festival in Silvan, in the Dandenongs, which is an annual event held at Tesselaar’s Bulb Farm. The paddocks had burst into bloom with over a 150 different tulip varieties on display and over a million spring flowering bulbs. It was a glorious Spring day and the Festival was very well attended with hundreds of people filing through and admiring the fields of spring bulbs, but especially so the tulips, of course. The Dutch Tesselaar family has had a nursery business since 1939 and they have become one of the prime bulb nurseries here in Victoria. It was a fantastic display of blooms, which inspired today’s Art Sunday offering.

Frenchman Claude Monet (1840 –1926) was the prime exponent of impressionism and his oeuvre is replete with colourful canvases, many of which have flowers as a theme. During a visit to The Hague in the Spring of 1886, Monet painted the tulip fields close to Sassenheim, between Leiden and Lisse. Prominent in these polders is the archetypal feature of Dutch landscapes, windmills! Monet was enchanted by the tulip fields and windmills, but as he communicated to his friends, he found the vibrancy and colour of the tulip fields maddening to render on canvas.

Born in Paris, the son of a grocer, Monet grew up in Le Havre. Contact with Eugène Boudin in about 1856 introduced Monet to painting from nature. He was in Paris in 1859 and three years later he entered the studio of Charles Gleyre, where he met Pierre-Auguste Renoir, Alfred Sisley and Frédéric Bazille. Edouard Manet was an influence on his figure compositions of the 1860s, while the informal style of his later landscapes originated in works such as 'Bathers at La Grenouillère', painted in 1869 when Monet worked with Renoir at Bougival.

Monet was the leading French Impressionist landscape painter. Like Camille Pissarro and Charles-François Daubigny, Monet moved to London during the Franco-Prussian war (1870-1871). After his return to France he lived at Argenteuil (1871- 1878). He exhibited in most of the Impressionist exhibitions, beginning in 1874, where the title of one of his paintings led to the naming of the movement. A period of travel followed in the 1880s, and in 1883 he acquired a property at Giverny, north-west of Paris. Thereafter Monet concentrated on the production of the famous series showing a single subject in different lighting conditions, including poplars, haystacks, Rouen Cathedral, and his own garden at Giverny.
Posted by Intelliblog at 15:42