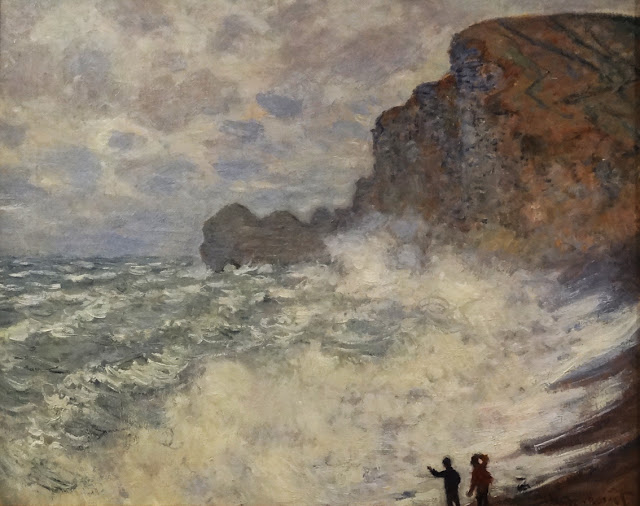 “What is art? Nature concentrated.” - Honoré de Balzac
Claude Monet (1840-1926) was the chief proponent of Impressionism, one of the major art movements of the 19th century, which shook the foundations of the art world and prepared the ground for the wave of modern art schools in its wake. For Art Sunday today I am highlighting one of his works from 1883, which is to be found in the National Gallery of Victoria in Melbourne. It is the “Gros Temps à Étretat” (Rough Weather at Étretat), oil on canvas.
In the 19th century, Étretat was a popular seaside resort on the Normandy coast and Monet visited it in January 1883 for a “working holiday”, influenced perhaps by the location’s recreational reputation. Étretat is located directly above the beach, immediately to the right of the view depicted in this painting, however, no indication is given here of the bustling resort town.
Instead, Monet frames his viewpoint to focus on the awesome power of nature with the wild waves and stormy skies on the left counterbalanced by the massive rock formations on the right. Between the two and pivotal in the composition are the two human figures in silhouette on the lower right. The one on the left is pointing out to sea – a gesture of awesome admiration, while the second figure is more interested in keeping his hat on! A comment perhaps on the romantic versus the pragmatic in human nature.
The walkers are a reminder of the recreational activities at Éntretat, further underlined by the zigzag lines on the cliffs in the distance, representing the relentless tourist paths beaten around Éntretat by the steps of the tourists and holiday-makers that have worked these walking trails on the landscape.
The painting is a magnificent portrayal of a moment in time and space, an acknowledgment of the majesty of nature, an impression of the interaction of human beings interacting with their environment. The scale of comparison that Monet makes underscores man’s puny stature when compared to the gigantic scale of natural forces at play in his environment. A deeply satisfying and beautiful work!
Please join me here on the Art Sunday meme if you have a post on Art in your blog.
Posted by Intelliblog at 10:03