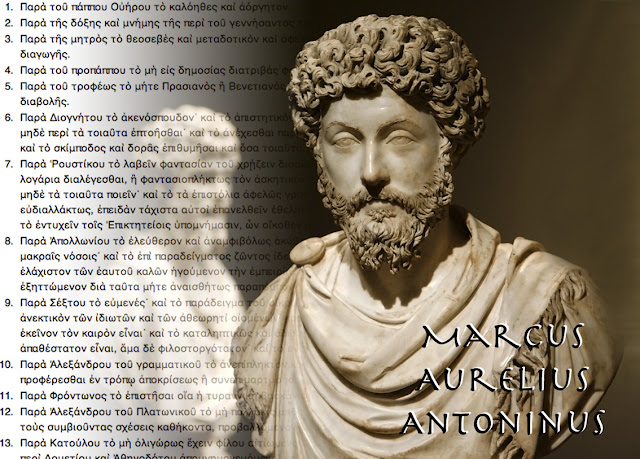 “Do not act as if you shall live ten thousand years. Death hangs over you. While you live, while it is in your power, be good.” - Marcus Aurelius
April 26th is the birthday of Marcus Aurelius Antoninus Augustus (April 26, A.D. 121 - March 17, A.D. 180). His parents were Annius Verus and Domitia Lucilla, although he was adopted by Emperor Antoninus Pius when at the age of 17 or 18 as part of an agreement Antoninus Pius had made with Emperor Hadrian. Marcus Aurelius' wife was Faustina, daughter of Hadrian, and they had 13 children, including Commodus Marcus Aurelius.

I have rather a lot of time for this Roman Emperor, as firstly he was a Stoic philosopher and secondly one of the “five good Roman emperors”, reigning as Caesar between A.D. 161 and A.D. 180. His Stoic philosophical writings are known as the “Meditations of Marcus Aurelius”. He was considered the last of the five good emperors and was succeeded by his son the infamous Roman emperor Commodus. It was during the reign of Marcus Aurelius that the Marcomannic War broke out at the northern frontier of the empire. It was also the time of the important physician Galen who wrote about a particularly virulent pandemic that was given Marcus Aurelius' family name.

The Augustan History says that it was when Marcus was adopted as heir that he was first called “Aurelius” instead of “Annius', which was his birth name. Antoninus Pius made Marcus consul and Caesar in A.D. 139. In 145, Aurelius married his sister by adoption, Faustina, daughter of Pius. After they had a daughter, he was granted tribunical power and imperium outside Rome. When Antoninus Pius died in 161, the Senate awarded the imperial power to Marcus Aurelius, however, Marcus Aurelius gave joint power to his brother (by adoption) and called him Lucius Aurelius Verus Commodus. The two co-ruling brothers are referred to as Antonines (as in the Antonine plague of 165-180).

As Marcus Aurelius was preparing for the Marcommanic War (along the Danube, between Germanic tribes and Rome), a plague broke out killing thousands. The Antonini (Marcus Aurelius and his co-emperor/brother-by adoption) helped with burial expenses. Marcus Aurelius also aided the Romans in time of famine and so is thought of as a particularly benevolent ruler.

Marcus Aurelius died in March A.D. 180. Before his funeral he had already been declared a god. When his wife, Faustina, had died in 176, Marcus Aurelius asked the Senate to deify her and built her a temple. The Augustan History (always a good read as it is gossipy and entertaining) states that Faustina had not been a chaste wife and that it was considered a stain on Marcus Aurelius' reputation that he promoted her lovers. Marcus Aurelius' ashes were put in Hadrian's mausoleum. Marcus Aurelius was succeeded by his biological heir, in contradistinction to the previous four good emperors.

"Meditations" (“Τὰ εἰς ἑαυτόν”, - Ta eis heauton, literally “[thoughts/writings] addressed to oneself”) is a series of personal writings by Marcus Aurelius, setting forth his ideas on Stoic philosophy. They are written in a highly educated and elegant form of Koiné Greek, current at the time and spoken/read by educated Romans. The “Meditations” is divided into twelve books that chronicle different periods of Marcus' life. Each book is not in chronological order and was written for no one but the emperor himself. The style of writing that permeates the text is one that is simplified, straightforward, and perhaps reflecting Marcus' Stoic perspective on the text itself.

Marcus' style is not viewed as anything regal, but rather a style a man adopts when among other men, which allows the reader to relate to the wisdom divulged. A central theme to the “Meditations” is to analyse one's judgement of self and others and to thus develop a cosmic perspective. He states: “You have the power to strip away many superfluous troubles located wholly in your judgement, and to possess a large room for yourself embracing in thought the whole cosmos, to consider everlasting time, to think of the rapid change in the parts of each thing, of how short it is from birth until dissolution, and how the void before birth and that after dissolution are equally infinite.”

His central thesis is to find one's place in the universe and as he states that everything came from nature, he concludes that everything shall return to it in due time. Another strong theme is of being focussed and being without distraction, all the while maintaining strong ethical principles such as “Being a good man”. His Stoic ideas often involve avoiding indulgence in sensory affections, a skill he says, will free a man from the pains and pleasures of the material world. He claims that the only way a man can be harmed by others is to allow his reaction to overpower him. An order or logos permeates existence. Rationality and clear-mindedness allow one to live in harmony with the world. This allows one to rise above faulty perceptions of “good” and “bad”.
Posted by Intelliblog at 17:48