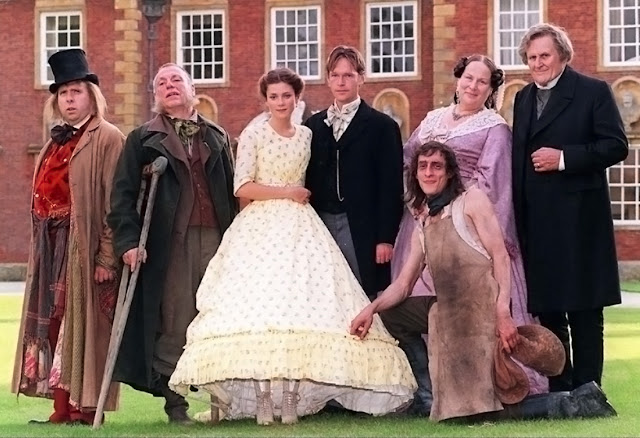 “Have a heart that never hardens, and a temper that never tires, and a touch that never hurts.” - Charles Dickens
We watched a BBC miniseries at the weekend, which in its four episodes did justice to the Charles Dickens novel it was based on. It was the 1998 production of “Our Mutual Friend" directed by Julian Farino, with an excellent screenplay by Sandy Welch. The British do period dramas very well and this was a fine example of this genre produced by the very experienced and pernickety BBC. It starred Paul McGann, Keeley Hawes, Steven Mackintosh, Anna Friel and Peter Vaughan, supported by a host of other able and well-selected supporting actors.
Dickens was a literary giant of 19th century England and his novels can be trusted upon to supply lots of drama, romance, excitement, thrilling vicissitudes of fortune and of course quite a bit of moralising as Dickens was a firm advocate of social justice and was active in bettering the lot of the poor and desperate citizens of the lowermost classes. Although he is not as popular today as he was in the past (compare his declining popularity with the rising star of Jane Austen, for example), his novels have always provided me with a very enjoyable read and his pages are full of interesting characters, humour and drama, vivid descriptions and many a twist and turn of plot.
The plot of this novel revolves around the contrasting fates and fortunes of London’s very poor underclass of “watermen” who make their living in London’s waterways (not always legally!) and the upper class of London’s “high society” of the rich and famous. The gossips of high society begin to tattle when a young man called John Harmon is found dead in the River Thames. He was the heir of a very rich dustman who had made his fortune on London’s dustheaps. To inherit his riches depended on Harmon marrying someone he had never met, Bella Wilfer, a woman of humble origins but very beautiful and extremely mercenary upon her own admission. Following Harmon’s death, the fortune passes into the hands of the working-class Boffins, who as nouveau riche take into their new home both Bella Wilfer and a mysterious secretary known as John Rokesmith. Meanwhile, Lizzie Hexam, the beautiful and virtuous daughter of the boatman suspected of Harmon’s murder, is pursued by two suitors: The obsessive and self-righteous schoolmaster Bradley Headstone and the scampish and lethargic aristocrat Eugene Wrayburn. Many other interesting characters add to the tale with rich subplots and as Dickens weaves his story, there are some surprises, and of course a happy end where everyone get exactly what they deserve.
This is a wonderful adaptation of this Dickens novel, which is powerful and full of the rage he expresses in documenting social injustice. He makes a comment on class barriers and the innate “worth” of people that is clearly independent of class. He spins a tale about love, both unrequited and fulfilled. The story has as its backdrop London’s waterways and dustheaps where the poor scratch out a living, contrasting strongly with the vacuous pastimes of high society and its snobbish members who mostly are ignorant of the lower class or when confronted by them are not loth to express their disgust and contempt. The screen is filled with great scenes and haunting images. The casting is exceptional, as one would expect from any good BBC adaptation. Stephen Mackintosh brings complexity and sensitivity to his John Rokesmith; Paul McGann has great fun delivering the best lines; while the two heroines (Keeley Hawes as Lizzie Hexham and Anna Friel as Bella Wilfer) are contrasted well and their characters show a satisfying development as the story unwinds. The murky hovels by the riverside full of dirty, dispirited and wayward people are contrasted beautifully with the glittering, luxurious and extremely sensual world of high society where fashion, money, connections and class are all that matters.
We would recommend this mini series wholeheartedly as it is an excellent adaptation of the novel, has high production values, is well acted and directed and looks very authentic.
Posted by Intelliblog at 21:59