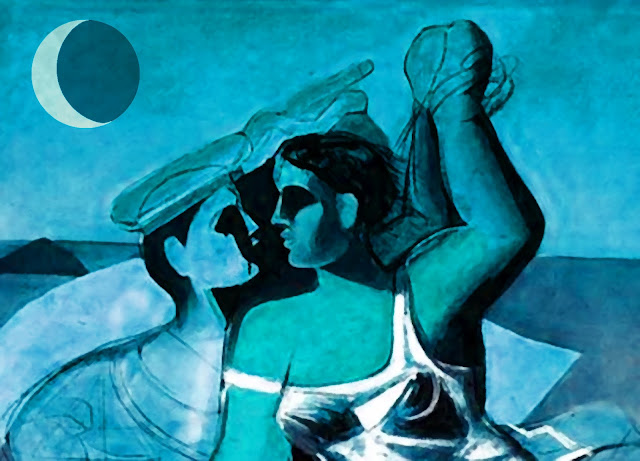 Magpie Tales this week has chosen Salvador Dalí’s “Venus and The Sailor” of 1925 as the stimulus for sparking the imagination of participants in her creative writing meme. Although Dalí is predominantly known for his surrealistic paintings, this particular work shows clear evidence of Picasso’s cubist influences.

Salvador Dali (Born: 11 May 1904; Figueres, Spain, Died: 23 January 1989; Figueres, Spain) had an artistic repertoire that included sculpture, painting, photography, multimedia work, and collaborations with other artists, most notably independent surrealist film-makers. Dali was born into a quasi-surreal existence. His brother, also named Salvador, died as a toddler, nine months before Dali’s birth. His parents told him he was the reincarnation of his older brother, which he also came to believe.

As a child, Dali attended drawing school, and by the age of thirteen, Dali’s father was arranging exhibitions of his charcoal drawings. In 1922, Dali went to study at the School of Fine Arts in San Fernando, where he was known as a bit of a dandy, wearing long hair and sideburns, and stockings with knee breeches in the style of 19th century aesthetes.  During his stay at the academy, Dali tried his hand in cubism and dada. But his stay was short lived, after he was expelled a few weeks before final exams, for stating that no one in the school was qualified enough to examine him.

After his expulsion, he travelled to Paris, where he met Pablo Picasso and Joan Miró, who heavily influenced his painting styles. Dali continually borrowed from many painting styles. From impressionism to renaissance works, he combined all elements into single compositions, raising interesting critiques from art critics, who were unsure as how to received his works.

Always a dandy, Dali grew a large moustache, which was a trademark of his appearance for the rest of his life.   In 1929, Dali began a relationship with the woman who would later become his wife, Gala. His father disapproved, and saw his connection with surrealism as a demoralising influence on his son. Upon hearing reports that Dali had created a work with an inscription insulting his mother, who had died eight years earlier of breast cancer, the elder Dali disowned and disinherited his son, telling him never to return home. Dali then married Gala and moved into a house at Port Lligat.

Dali spent the middle and late years of his life between the United States and his beloved Catalonia, Spain, collaborating with other artists, canoodling with social elites, and creating many stories for the newspapers. After his wife’s death in 1982, Dali lost much of his will to live, and purposely dehydrated himself almost to the point of death. There was also a mysterious fire in his apartment in 1984, from which he was saved, but many thought was a suicide attempt. He died of heart failure five years later at the age of 84 years.

I have “tampered” a little with Dalí’s painting, cropping it and changing the colour scheme and adding the moon, which was there even though Dalí was not looking at it. I am sure he wouldn’t mind…

A Flower in the Moonlight

We started playing with words again tonight,
The singer articulating softly our innermost desires,
Our hearts vocalising dumbly our sweetest bitter dreams.
The room so small, the light so dim,
The night so deep, the short space between us,
So immense it could in light years be measured...
We’ve played this scene so many times before,
Two actors on the stage fumbling with props
Struggling with our lines, trying inarticulately to improvise
Forgotten speeches that we would not dare to speak
Even if we had remembered them.
Your eyes avoid mine while a flower blooms in your hand.
Above us the air a prism, and a hundred light-bulb stars shine on a celluloid sky
A room with walls of music, the pasteboard moon for ceiling.
If we could only bridge the gap, dissolve the ice
If you could touch me now, think of what would be gained!

You stretch your hand, as years of silence crumble
A thousand nights, dead, are resurrected
And at last, this time on cue, you offer me
A flower in the moonlight.
Posted by Intelliblog at 11:00