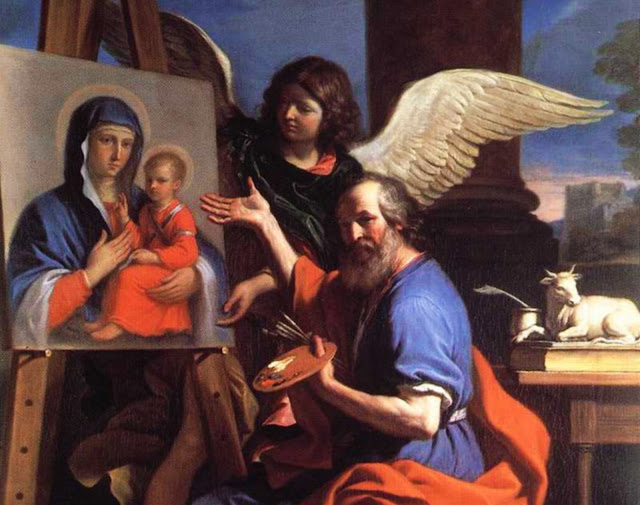 “To give light to them that sit in darkness and in the shadow of death, to guide our feet into the way of peace.” - St. Luke, 1. 79

Today is St Luke’s Feast Day, celebrated by the Roman Catholic Church, the Orthodox Church, the Eastern Catholic Churches, the Anglican Church, the Lutheran Church, and some other Protestant Churches. St Luke was the Greek writer of the third Gospel and its sequel, the Acts of the Apostles.  He was a physician but also a painter.  He is traditionally reputed to have painted a portrait of the Virgin.  He is therefore the patron saint of artists and doctors, but he is also venerated as a patron saint of surgeons, students and butchers!

He accompanied St Paul on his second missionary journey and went with him to Rome.  He died a martyr. His symbol as an evangelist is an ox.  The Gospel according to St Luke was written in the 1st century AD and has been ascribed to Luke from the 2nd century.  It is a literary composition, showing a thoughtful working over of the events it describes and shows the influence of St Paul, and derives some of its material from the Gospel of St Mark.

St Luke was considered to be a saint lucky for lovers. Young girls prepared an ointment of marigold flowers, marjoram, thyme and wormwood all simmered in vinegar and honey on the night of his feast day.  They smeared this mess on their abdomen and chanted the following rhyme on his feast day while lying down to sleep:
St Luke, St Luke, be kind to me,
In dreams let me my true love see!

Their lover would then appear in their dreams.  If he was going to be a good husband to them he would be smiling and cheerful.  If he was to be a bad husband and was likely to be unfaithful he would appear rude and churlish.  It was customary for lovers around this time to exchange love tokens, and set the wedding date.  September to January were popular months to marry in:
Marry in September’s shine
Your living will be rich and fine.
If in October you do marry
Love will come but riches tarry.
If you wed in bleak November
Only joy will come, remember.
When December’s showers fall fast
Marry and true love will last.

Around St Luke’s Feast Day, the weather in the Northern Hemisphere may improve somewhat and the weather may be mild, especially in Southern England and Europe. This respite in the bad autumn weather is known as “St Luke’s Little Summer”.

The painting above is a detail from Guercino's "St Luke Displaying a Portrait of the Virgin".
Posted by Intelliblog at 00:21