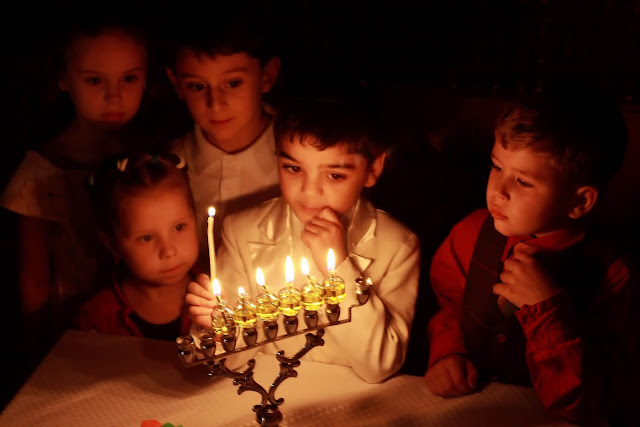 The festival of the Hanukkah is one of the most popular and joyous of the Jewish festivals, celebrated for eight days and nights. It starts on the 25th of the Jewish month of Kislev, which coincides with late November-late December on the secular calendar. In Hebrew, the word “hanukkah” means “dedication”. The name reminds us that this holiday commemorates the re-dedication of the holy Temple in Jerusalem following the Jewish victory over the Syrian-Greeks in 165 B.C. At that time, the armies of Judas Maccabaeus (the “Hammer”) had routed the forces of Antiochus IV.

As a mark of favour of the Chosen People, there was a miraculous relighting of the perpetual light in the Temple in Jerusalem.  The ritual oil that kept the light burning had run out and only enough was left for one day. However, miraculously, the light kept burning for eight days. To commemorate that event, candles are lit in synagogues and homes. The menorah is the special candelabrum used for this ritual, called for this festival the hanukkiyah. One candle is lit every night in each of the seven nights of the festival.

While the Hanukkah lights are burning parties are held, games are played, gifts are exchanged and various other entertainments and plays are featured.  This is as close to Christmas as the Jewish faith gets! Tradition limits work only during the time that the Hanukkah candles are lit.

Every Jewish community of the diaspora has its own unique Hanukkah traditions, but there are some traditions that are almost universally practiced. They are: Lighting the hanukkiyah, spinning the dreidel and eating fried foods.

Lighting the hanukkiyah: Every year it is customary to commemorate the miracle of the Hanukkah oil by lighting candles on a hanukkiyah. The hanukkiyah is lit every night for eight nights.
Spinning the dreidel: A popular Hanukkah game is spinning the dreidel, which is a four-sided top with Hebrew letters written on each side. Gelt, which are chocolate coins covered with tin foil, are part of this spinning dreidel game.
Eating fried foods: Because Hanukkah celebrates the miracle of oil, it is traditional to eat fried foods such as latkes and sufganiyot during the holiday. Latkes are pancakes made out of potatoes and onions, which are fried in oil and then served with applesauce. Sufganiyot (singular: sufganiyah) are jam-filled donuts that are fried and sometimes dusted with confectioners’ sugar before eating.

Happy Hanukkah to all who celebrate it!