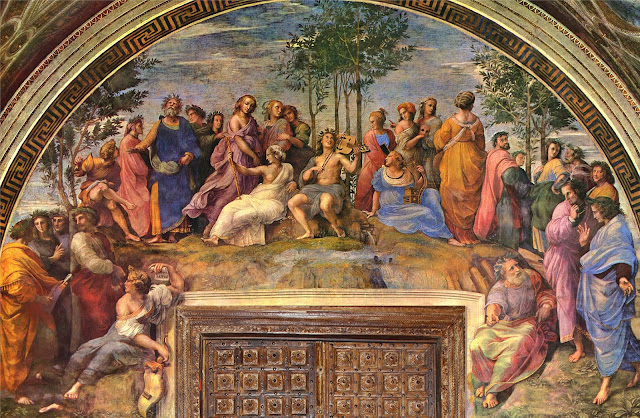 “Sing, O Muse, of the anger of Achilles son of Peleus, that brought countless ills upon the Achaeans. Many a brave soul did it send hurrying down to Hades, and many a hero did it yield a prey to dogs and vultures, for so were the counsels of Zeus fulfilled from the day on which the son of Atreus, king of men, and great Achilles, first fell out with one another…” – Homer, Iliad

The Muses of Greek mythology are the daughters of Zeus and the titaness Mnemosyne, who personified memory. The nine Muses are the nymphs of the arts and sciences, and as such inspire all artists, poets, philosophers, and musicians. They are the companions of Apollo, the god of the sun, light, the arts, music, poetry and healing. In his role, as leader of the Muses, Apollo is given the name Musagetes – ‘Muse Leader’. Each Muse presides over a particular form of literature, art or science.

To begin with, the Muses were probably a vague collections of deities, undifferentiated within the group, which are characteristic of certain, probably early, strata of Greek religion. Differentiation is a matter of mythological systematisation rather than of cult, and began with the 8th-century-BC poet Hesiod, who mentioned by names all nine muses, as well as their tutelary attributes.

According to the Greek Myths, in his usual philandering manner, Olympian Zeus lusted after the young titaness Mnemosyne, the daughter of Gaia and Uranus. He overcame her and slept with her for nine consecutive nights. The result of their encounter was the Nine Muses, who were endowed with beauty, intellect and enormous talent in literature, the arts and the sciences.

Mnemosyne gave the babies to the nymph Eupheme to nurture, while Apollo was entrusted with their education. Apollo took them to beautiful Mount Helicon, where an old Temple of Zeus used to be. The Muses dedicated their lives to their arts. Ever since then, the Muses have supported and encouraged creation, enhancing the imagination and providing inspiration of artists.

Very little is known of the cult of the muses, but they had a festival every four years at Thespiae, near Helicon, and a contest (Múseia), presumably in singing and playing. They probably were originally the patron goddesses of poets (who in early times were also musicians, providing their own accompaniments), although later their range was extended to include all liberal arts and sciences—hence, their connection with such institutions as the Museum (Mouseíon, seat of the Muses) at Alexandria, Egypt.
Posted by Intelliblog at 14:28