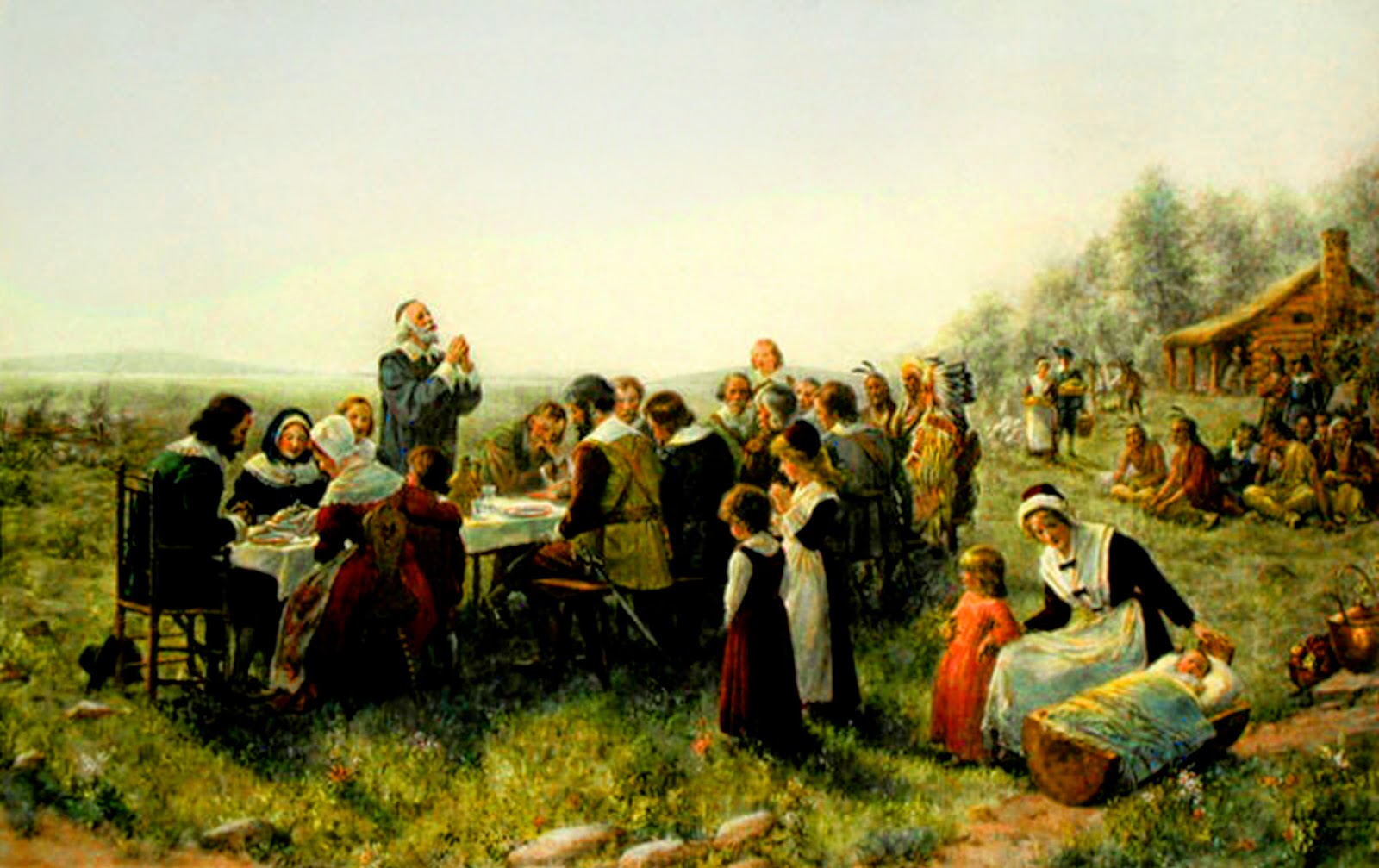 “Dear Lord, we beg but one boon more: Peace in the hearts of all men living, peace in the whole world this Thanksgiving.” - Joseph Auslander

Living in Australia where we celebrate no Thanksgiving holiday, I have had to educate myself regarding this American tradition. My lessons in history had certainly made me aware of the reasons why this holiday was celebrated and its special significance to the US, especially, but I must confess that I did not know much about this tradition until I read about it in detail.

The first Thanksgiving in America was celebrated in 1621 in the Plymouth Colony by the Puritans who came from England. Governor of the colony, William Bradford, proclaimed a day of thanksgiving to celebrate a good harvest after a particularly harsh growing year in the colony. The celebration was based on traditional English harvest festivals that were still fresh in the minds and hearts of the colonists. The local Wampanoag Indians were invited to this feast as a gesture of goodwill for their friendly attitude towards the colonists.

The colonists did not call their holiday a Thanksgiving but rather a harvest festival. Thanksgiving to their minds was a religious observance where one went to church to thank God for a victory in battle, for example. The first Thanksgiving was not celebrated every year afterwards, so it was not a tradition that too root immediately in the lives of the people. The original harvest feast took place sometime between September 21 and November 11, the English harvest festivals traditionally celebrated around the 29th of September. In the Plymouth Colony, in 1623 a day of fasting and prayer during a period of drought was changed to one of thanksgiving because the rain came during the prayers. Gradually the custom prevailed in New England of annually celebrating Thanksgiving after the harvest.

During the American Revolution an annual day of national Thanksgiving was suggested by the Continental Congress. In 1817 New York State adopted Thanksgiving Day as a recurrent annual holiday, and by the middle of the 19th century many other states had done the same. In 1863 President Abraham Lincoln appointed a day of thanksgiving as the last Thursday in November. Since then, each president issued a Thanksgiving Day proclamation. President Franklin D. Roosevelt set the date for Thanksgiving to the fourth Thursday of November in 1939 (approved by Congress in 1941).

What was on the menu of the first harvest feast of Thanksgiving? It’s almost certain that pumpkin pie and mashed potatoes weren’t on the menu. Venison and wild fowl are mentioned by contemporary writers and these are a certainty. Edward Winslow in 1621 writes in ‘A Journal of the Pilgrims at Plymouth’:
"Our harvest being gotten in, our governor sent four men on fowling, that so we might after a special manner rejoice together after we had gathered the fruit of our labors. They four in one day killed as much fowl as, with a little help beside, served the company almost a week. At which time, among other recreations, we exercised our arms, many of the Indians coming amongst us, and among the rest their greatest king Massasoit, with some ninety men, whom for three days we entertained and feasted, and they went out and killed five deer, which they brought to the plantation and bestowed upon our governor, and upon the captain, and others. And although it be not always so plentiful as it was at this time with us, yet by the goodness of God, we are so far from want that we often wish you partakers of our plenty.”

It is quite probable that various fish, lobster, seal and swan were also on the menu.  Most food was spit-roasted or boiled on an open fire as ovens weren’t at all commonplace. Vegetables were in short supply and the only ways to preserve food was by drying, smoking or pickling it. Salt was commonplace as a condiment, but pepper and spices were scarce and expensive. People had no forks and ate with their hands, spoons and knives. Seniority and social standing determined what you ate. As soon as the food was prepared, it was put on platters and placed on the table, the choicest being most accessible to the most important people. People tended to eat what was closest at hand and someone who was very low on the pecking order often had to make do with scraps and bones. Servants and children waited on the adults and then ate afterwards whatever left-overs they could get.

Pilgrims didn’t eat meals in courses as is done nowadays. All the foods were placed on the table concurrently and people ate in any order they chose. Sometimes there were two courses, but each of them would contain both meat dishes, puddings, and sweets. Sweets were a luxury item as sugar was in short supply and expensive. Spices such as cinnamon, ginger, pepper, nutmeg were used, but they were also expensive.

Some recipes have been handed down to us, and it appears that the 17th century cook was more reliant on improvisation, taste and experience rather than the following of a recipe. Many of the common people could neither read nor write, in any case! The biggest meal of the day for was eaten at noon and it was called noonmeat or dinner. Housewives would spend the better part of their morning cooking that meal. Supper was a smaller meal that they had at the end of the day. Breakfast tended to be leftovers from the previous day's noonmeat. The colonists and Wampanoag Indians ate very similar foods, but their eating patterns were different. While the colonists had set eating patterns, the Wampanoags tended to eat when they were hungry and had pots cooking throughout the day.

Here are a couple of 17th century recipes for Thanksgiving:
The Ancient New England standing dish.
But the Housewives manner is to slice them (pumpkin) when ripe, and cut them into dice, and so fill a pot with them of two or three Gallons, and stew them upon a gentle fire a whole day, and as they sink, they fill again with fresh Pompions, not putting any liquor to them; and when it is stew'd enough, it will look like bak'd Apples; this they Dish, putting Butter to it, and a little Vinegar, (with some Spice, as Ginger, &c.) which makes it tart like an Apple, and so serve it up to be eaten with Fish or Flesh: It provokes Urine extreamly and is very windy.

Here is the modern interpretation:
Mashed Pumpkin
4 cups of cooked (boiled, steamed or baked) pumpkin, roughly mashed
3 tablespoons butter
2 to 3 teaspoons cider vinegar
1 or 2 teaspoons ground ginger
1/2 teaspoon salt
In a saucepan over medium heat, stir and heat all the ingredients together. Adjust seasonings to taste, and serve hot.

Sauce for a Turkie
Take faire water and set it over the fire, then slice good store of Onions and put into it, and also Pepper and Salt, and good store of the gravy that comes from the Turkie, and boyle them very well together: then put to it a few fine crummes of grated bread to thicken it; a very little Sugar and some Vinegar, and so serve it up with the Turkey.
Gervase Markham , The English Huswife, 1623

Modern Interpretation:
Onion Sauce for Turkey
6 medium onions, sliced thinly
2 cups of water
2 teaspoons of coarsely ground pepper
1 teaspoon salt
1 tablespoon sugar
1/4 cup red wine vinegar
1/4 cup breadcrumbs (optional)
Follow your favourite recipe for roast turkey. Remove the turkey to a platter reserving the pan juices. Place thinly sliced onions in a pot with water and salt. Bring to a boil over medium high heat and cook until the onions are tender but not mushy. A good deal of the water should have boiled away. Set aside for a moment. Place the roasting pan over medium heat and stir to loosen any brown bits. Stir in the onion sauce, sugar, vinegar and breadcrumbs if desired. Add pepper to taste and adjust seasonings. To serve, pour over sliced turkey or serve alongside in a separate dish.

To all American friends, Happy Thanksgiving! May you have a peaceful and enjoyable day together with your family and friends. May you be thankful for all the good things in life and appreciate mostly each other on this special holiday.
Posted by Intelliblog at 02:58