HITCHCOCK HAVING A MANHATTAN 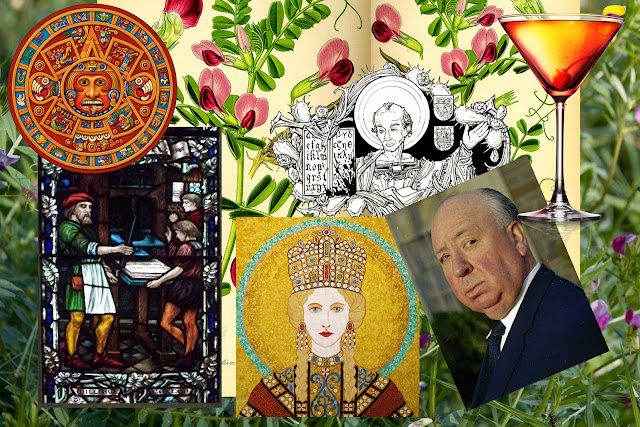 “We would often be sorry if our wishes were gratified.” - Aesop

The Catholic faith celebrates today St Hippolytus’s and St Cassian’s Feast Day. St Cassian was a very strict Christian schoolmaster in Imola near Ravenna, who was hated by his pagan students.  He found death after being stabbed to death by his pupils’ iron pen nibs.  He is therefore the patron saint of schoolteachers.
Greek Orthodox Christians celebrate Holy Maximus the Confessor’s Feast Day; St Irene the Queen’s Feast Day.

Vetch, Vicia sativa, is the birthday plant for today.  It was formerly grown extensively as fodder crop. It symbolises shyness.

A cocktail that I enjoy around this time of the year is the Manhattan. Here’s how I make it.

Method
Put the ice cubes in a glass jug and pour in the vermouth and the rum. Stir vigorously and strain into a chilled martini glass. Drop in the cherry and enjoy…

The Maya of Central America were an ancient people intrigued by and obsessed with time. Amongst the ancients, they had the most accurate calendar and they believed that time was finite with a definite starting and ending point.  This day in 3,114 BC, according to the Maya marked the creation of time and its ending was predicted to be the 23rd of December 2,012 AD. A new cycle would then begin with a new universe and a new order of things.
Posted by Intelliblog at 04:35