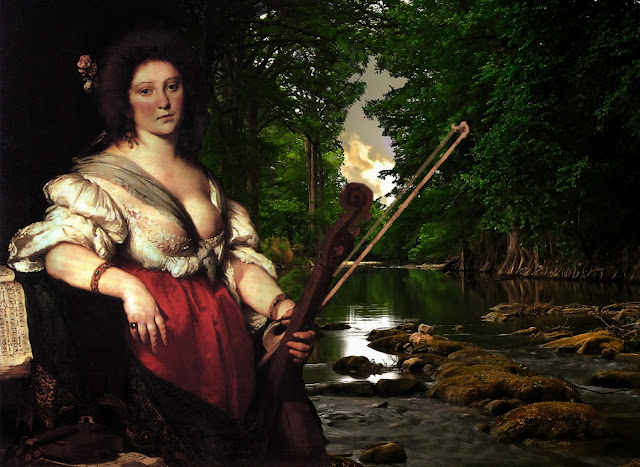 “The sweetest of all sounds is that of the voice of the woman we love.” - Jean de la Bruyère

Barbara Strozzi (also called Barbara Valle; baptised 6 August 1619  – 11 November 1677) was an Italian singer and composer. Her Baroque compositions were published in her lifetime.

Giulio Strozzi, a poet and librettist, recognised Barbara as his adopted daughter. She was most likely the illegitimate daughter of Strozzi and Isabella Garzon, his long-time servant and heir. She was baptised in the church of Santa Sofia in the Cannaregio district of Venice.

Giulio encouraged his daughter’s musical talent, even creating an academy in which Barbara’s performances could be validated and displayed publicly. He seemed to be interested in exhibiting her considerable vocal talents to a wider audience. However, her singing was not her only talent. She was also compositionally gifted, and her father arranged for her to study with composer Francesco Cavalli.

It is conceivable that Strozzi may have been a courtesan, however, she also may have merely been the target of jealous slander by her male contemporaries. She appears to have led a quiet, if not slightly unusual life; there is evidence that at least three of her four children were fathered by the same man, Giovanni Paolo Vidman. Vidman (also spelled Widmann) was a patron of the arts and supporter of early opera. After Vidman’s death it is likely that Strozzi supported herself by means of her investments and by her compositions. He did not, apparently, leave anything to her or her children in his will. Strozzi died in Padua in 1677 aged 58. Strozzi is believed to have been buried at Eremitani. When she died without leaving a will, her son Giulio Pietro claimed her inheritance.

Strozzi was said to be “the most prolific composer – man or woman – of printed secular vocal music in Venice in the Middle of the century.” Her output is also unique in that it only contains secular vocal music, with the exception of one volume of sacred songs. She was renowned for her poetic ability as well as her compositional talent. Her lyrics were often poetic and well-articulated.

Nearly three-quarters of her printed works were written for soprano, but she also published works for other voices. Her compositions are firmly rooted in the seconda pratica tradition. Strozzi’s music evokes the spirit of Cavalli, heir of Monteverdi. However, her style is more lyrical, and more dependent on sheer vocal sound. Many of the texts for her early pieces were written by her father Giulio. Later texts were written by her father’s colleagues, and for many compositions she may have written her own texts.

Here is her “Sino alla morte”, a cantata for soprano and basso continuo. It is performed by Roberta Invernizzi, soprano and the group Bizzarrie Armoniche with Elena Russo, violoncello and direction.
Posted by Intelliblog at 20:50