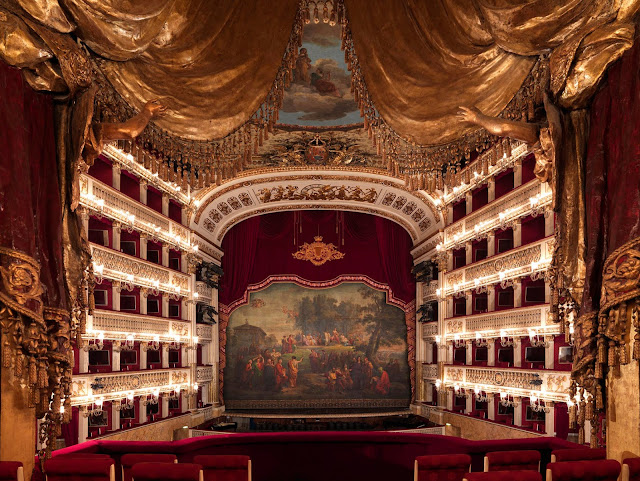 “Put a compass to paper and trace a circle. Then tell me which other country has such a concentration of places like Amalfi, Naples, Ischia, Procida, Sorrento, Positano, Pompeii, and Capri.” -  Diego Della Valle

The late Baroque Neapolitan composer Francesco Mancini (16 January 1672 – 22 September 1737), although somewhat obscure now, was second only to Alessandro Scarlatti in his day. His music represents a transitional period between the Baroque and Classical eras. Mancini was mainly an opera composer who served the insatiable Neapolitan market, writing as many as 30 works for the stage, plus numerous oratorios, and a body sacred vocal music that was granted wide distribution throughout Europe. He also composed a number of flute sonatas that are still considered important in the late-Baroque repertoire of that instrument.

He must have begun his musical training early in life, for at the age of 16 he entered the Conservatorio di Maria della Pietà dei Turchini to study organ under Francesco Provenzale and under Ursino. Six years later, he was working as an organist and by 1704, he was the principal organist of the royal chapel. Mancini's career as an opera composer was already underway. His first known composition, the opera “Il Nodo Sciolto”, was completed in 1692, his next, Ariovisto, in 1702. From that time on, through shifting fortunes, he was almost constantly occupied with arranging or conducting operas, apparently to the neglect of his other ambitions.

Scarlatti vacated his position as maestro di capella at the Conservatorio in 1708. Mancini then temporarily stepped into the maestro’s shoes only to be ousted and demoted to Scarlatti’s deputy when the elder returned to the position at the end of the same year. Mancini may have worked in Scarlatti’s shadow throughout his life, but his years as deputy to him were in fact his most productive ones. He seems to have been a man more interested in his own music than in his official appointments. Because of this preoccupation with his own work, his progress in that domain was slow and he had to wait until 1725 to again become maestro, though in 1718 he received a guarantee that he’d inherit the position once it became vacant.

He was made director (a position lower than maestro) of the Conservatorio in 1720. Although none of his students are now known, he must have had hundreds of them. Around this time, Mancini seems to have been deliberately courting a relationship with the English throne through the Consul General to the Reign of Naples, John Fleetwood, because he dedicated his collection of 12 flute sonatas to him. His successful and overt cultivation of Fleetwood resulted in those sonatas being published in London in 1724. In the following year, he at last succeeded Scarlatti as maestro di capella position at the Conservatorio, but wasn’t able to enjoy his official prestige for very long; in 1735 a stroke left him semi-paralysed and he died in 1737.

His works include 29 operas, sonatas, 7 serenatas, 12 oratorios and more than 200 secular cantatas in addition to assorted sacred music and a small amount of instrumental music. Today he is best known for his recorder sonatas.