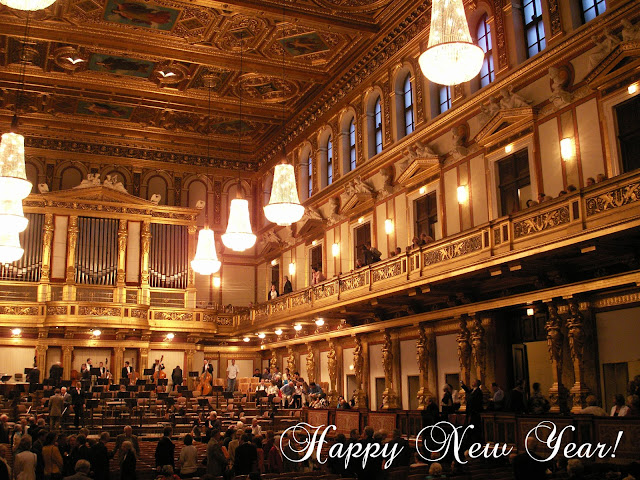 “Let our New Year's resolution be this: we will be there for one another as fellow members of humanity, in the finest sense of the word.” - Göran Persson

The Vienna New Year’s Concert (Neujahrskonzert der Wiener Philharmoniker) is a concert of classical music performed by the Vienna Philharmonic that takes place each year in the morning of New Year’s Day in Vienna, Austria. It is broadcast live around the world to an estimated audience of 50 million in 73 countries in 2012 and 90 countries in 2015.

There had been a tradition of concerts on New Year’s Day in Vienna since 1838, but not with music of the Strauss family. From 1928 to 1933 there were five New Year concerts in the Musikverein, conducted by Johann Strauss III. These concerts were broadcast by the RAVAG. In 1939, Clemens Krauss, with the support of Vienna Gauleiter Baldur von Schirach, devised a New Year concert which the orchestra dedicated to Kriegswinterhilfswerk (Winter War Relief), to improve morale at the front lines. After World War II, this concert survived, as the Nazi origins were largely forgotten, until more recently.

There are traditionally about a dozen compositions played, with an interval halfway through the concert and encores at the end. They include waltzes, polkas, mazurkas, and marches. Of the encores, the first is often a fast polka. The second is Johann Strauss II’s waltz “The Blue Danube”, whose introduction is interrupted by applause of recognition and a New Year greeting from the musicians to the audience. The last is Johann Strauss I’s Radetzky March, during which the audience claps along under the conductor’s direction. In this last piece, the tradition also calls for the conductor to start the orchestra as soon he steps onto the stage, before reaching the podium. The complete duration of the event is around two and a half hours.

The concerts have been held in the Großer Saal (Large Hall) of the Musikverein since 1939. The television broadcast is augmented by ballet performances in selected pieces during the second part of the programme. The dancers come from the Vienna State Opera Ballet and dance at different famous places in Austria, e.g. Schönbrunn Palace, Schloss Esterházy, the Vienna State Opera or the Wiener Musikverein itself. In 2013, the costumes were designed by Vivienne Westwood. From 1980 until 2013, the flowers that decorated the hall were a gift from the city of Sanremo, Liguria, Italy. In 2014, the flowers were provided by the Vienna Philharmonic itself. Since 2014, the flowers have been arranged by the Wiener Stadtgärten.

The concert is popular throughout Europe, and more recently around the world. The demand for tickets is so high that people have to pre-register one year in advance in order to participate in the drawing of tickets for the following year. Some seats are pre-registered by certain Austrian families and are passed down from generation to generation.

Here is the complete New Year Concert 2013, with the Wiener Philharmoniker under the direction of Franz Welser Moest.
Posted by Intelliblog at 18:21