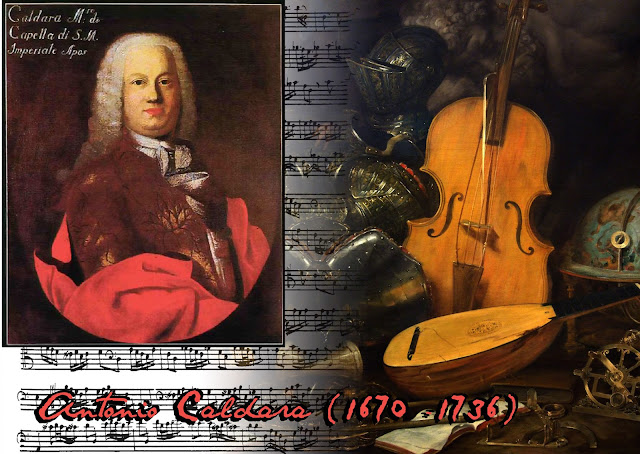 “Music, ultimately, is one of the great ways that we as humans have for coding internal life. It’s glue that joins people together.” – Yo-Yo Ma

Antonio Caldara (1670 – 28 December 1736) was an Italian Baroque composer. Caldara was born in Venice (exact date unknown), the son of a violinist. He became a chorister at St Mark’s in Venice, where he learned several instruments, probably under the instruction of Giovanni Legrenzi. In 1699 he relocated to Mantua, where he became maestro di cappella to the inept Charles IV, Duke of Mantua, a pensionary of France with a French wife, who took the French side in the War of the Spanish Succession.

Caldara left Mantua in 1707, after the French were expelled from Italy, then moved on to Barcelona as chamber composer to Charles III, the pretender to the Spanish throne (following the death of Charles II of Spain in 1700 without any direct heir) and who kept a royal court at Barcelona. There, he wrote some operas that are the first Italian operas performed in Spain. He next moved on to Rome, becoming maestro di cappella to Francesco Maria Marescotti Ruspoli, 1st Prince of Cerveteri. While there he wrote in 1710 “La costanza in amor vince l’inganno” (Faithfulness in Love Defeats Treachery) for the public theatre at Macerata.

With the unexpected death of Emperor Joseph I from smallpox at the age of 32 in April 1711, Caldara deemed it prudent to renew his connections with Charles III (soon to become Holy Roman Emperor Charles VI) as he travelled from Spain to Vienna via northern Italy. Caldara visited Vienna in 1712, but found Marc’Antonio Ziani and Johann Joseph Fux firmly ensconced in the two highest musical posts. He stopped at the Salzburg court on his return journey to Rome, where he was well received (and to which he subsequently sent one new opera annually from 1716 and 1727).

In 1716, following the death the previous year of Ziani and the promotion of Fux to Hofkapellmeister, Caldara was appointed Vize-Kapellmeister to the Imperial Court in Vienna, and there he remained until his death. Caldara is best known as a composer of operas, cantatas and oratorios. Several of his works have libretti by Pietro Metastasio, the court poet at Vienna from 1729.